Over the years these two sides have met 19 times in both the FA Cup and the EFL Cup, Chelsea boasting 11 wins to Liverpool’s 7, 2014/15 season semi-final ended in a draw between these two, as we prepare for the 20th meeting between these two giants of the English league.

The road to Wembley for Chelsea wasn’t as straightforward as they would’ve liked entering the competition in round 3 their first win came against fellow Premier League side Aston Villa which had to be decided by a penalty shootout after finishing 1-1 after 90 minutes.

Round 4 was another fellow Premier League side Southampton which also had to be decided by a penalty shootout after another 1-1 draw in 90 minutes which Chelsea won 3-2 after 8 penalties were taken.

The quarter-final against Brentford was more straightforward for Chelsea to brush aside the newly-promoted Premier League side, with goals from Pontus Janssen putting it into his own net and Jorginho netting from the penalty spot to secure their place in the semi-final against Spurs which Chelsea won home and away and secured their place in another final this season.

Thomas Tuchel said this in a press conference ahead of today’s final saying:

“We will find a winner somehow. We know very well what it takes to have a tough match against Liverpool. We feel confident we have what it takes and now need to show it.”

Liverpool’s road to Wembley has been fairly straightforward their journey beginning in round 3 against Norwich City which Liverpool won 3-0 at Carrow Road against the newly-promoted Premier League side.

Round 4 saw Liverpool taking on Championship side Preston North End, which saw Liverpool edge through to the quarter-final against a stubborn Preston side, the opening goal came on the 60th-minute through Minamino, but the night belonged to cult hero Origi who scorpion kicked his side into the next round on the 84th minute.

The quarter-final against Leicester City would prove to be the toughest test for Liverpool, going 2 nil behind as Jamie Vardy bagged himself a brace, but Liverpool levelled the game up but on the 68th minute Leicester looked to have managed to do enough to secure their place in the semi-final, but Minamino in the 5th minute of injury time volleyed the game into a penalty shootout with Liverpool won 5-4 and faced Arsenal in the semi-final which Liverpool 2-0 over the two legs to secure their place in the final against Chelsea.

Jurgen Klopp spoke to the media ahead of the final and said:

“When you make it to the final, then it’s big and I know the people are buzzing as well. So, we can play in a final in front of a full stadium which is great, and I’m really forward to it.”

Like Klopp’s assistant said, “it’s two Champions League sides competing for a trophy.” Therefore we love English football even though this competition is not as prestigious as the Champions League Final but it’s a piece of silverware to put in your trophy cabinet.

Over the years there have been 23 different winners since this competition was launched back in the 1960-61 season. And has seen plenty of drama as not all the winners were in the topflight at the time the final was played.

The last winner of the EFL cup who played outside of the premier league was Sheffield Wednesday who played their league football in division 2 at the time the final took place and beat Manchester United 1 nil in the 1990/1991 season.

Who are you backing in today’s final? Can Chelsea add a third trophy of the season? Having already won the Super Cup and Club World Cup so far this season. Or can Liverpool become the only team to win this cup 9 times? 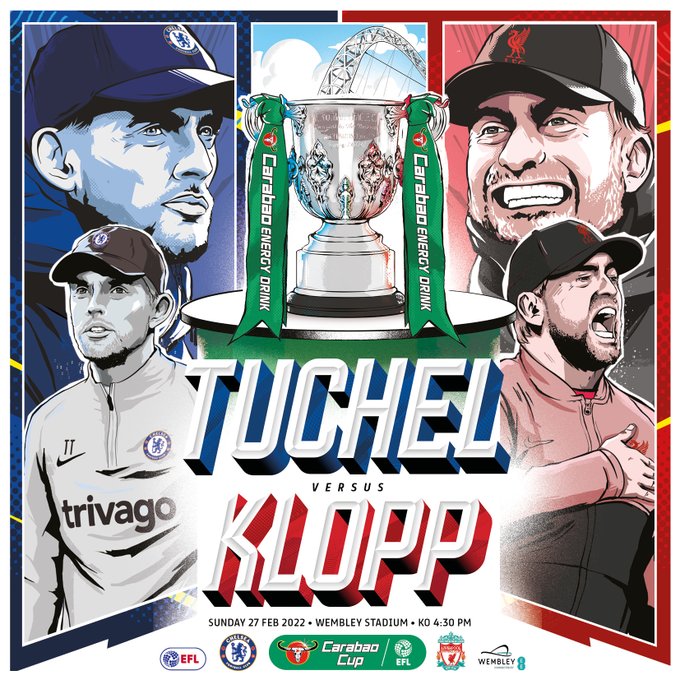