Carl Edwards took the lead on the last pit stop and held off Denny Hamlin on a restart eight laps from the end for his first Southern 500 victory Sunday night.Pole-sitter Brad Keselowski was second and Hamlin finished third. Joey Logano was fourth, followed by defending race champion Kevin Harvick and the Busch brothers, Kurt and Kyle. Keselowski dominated most of the race by leading the most laps with 196.

Carl became the third driver in a row to win at Darlington in his first year with a new team (Matt Kenseth in 2013 with Joe Gibbs Racing, Kevin Harvick in 2014 with Stewart-Haas Racing. Edwards won for the second time this season, and gave Joe Gibbs Racing its seventh victory in the past 10 events. JGR swept the weekend, with Hamlin winning the Xfinity race Saturday.He suffered a flat tire on lap 90 and went two laps down, but fought his way back to put himself in position to challenge. Edwards was helped out by a late caution,it was pretty unlikely that he would have caught Keselowski,however Jeb Burtons spin gave him the golden opportunity.

“I loved it. This is as good as it gets. This is what it’s about – sliding cars, the tires are falling off,” Edwards said. “If there’s any way we can run this in the Chase, I hope we do it.”

The race was filled with accidents most likely do to the low-downforce rules package which made the cars harder to drive and set a new Darlington track record for cautions. Kurt Busch survived a late spin after a tap from Martin Truex Jr to take sixth, ahead of brother Kyle.Dale Earnhardt Jr. battled his way from a starting spot of 22nd to finish in eighth, while Truex and Kyle Larson rounded out the top 10. 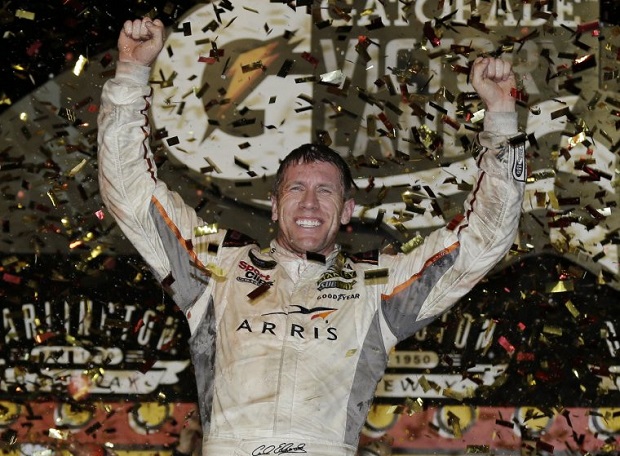