The tempestuous life and death of Argentina’s legendary boxer

Carlos Monzon was an extraordinary boxing champion in an era when there were just two major belts per clearly defined division and a string of dangerous opponents, fierce rivals, and all-time greats competing at every level. He stands comparison alongside them all as one of the very best.

He grew up on the mean streets of San Javier and the dusty poverty of Barranquitas Oeste, a poor suburb of Santa Fé, Argentina. where a statue now stands in his honour. He quit school at 9, to join his 12 siblings in working to help feed the family, including stints as a shoeshine boy, milk and paper rounds, packing and lugging meat. Monzon’s father, Roque, even shopped him around for a few pesos a time in fights with other dirt-poor shantytown kids.

And this is where his interest in boxing and a search for a better life began.

In early 1960, Monzon walked through the door of the La Luna Gym, and was taken under the wing of boxing trainer Amilcar Brussa who saw something in the feral focus, the ruthless, single-minded energy and violent destructive, ferocity that prompted him to put all his energies into this street kid.

It was a wise decision. But not without its troubles.

Brussa was often woken in the middle of the night to get Monzon out of jail for yet another street fight which put the victim in hospital. Brussa knew if Monzon could add discipline to his undoubted power, and save the violence for inside the ring, he could be a champion. It was a prophecy that would go beyond his wildest dreams for Brussa moulded the ‘skinniest 6’ 2”, suffering from malnutrition, into one of the most lethal fighting machines the boxing world has ever known and a future Hall of Famer.

Monzon had exactly 100 professional fights and retired in 1977 after fighting and beating, Rodrigo Valdez in Monte Carlo, a fight considered a classic. He lost just three times, early in his career, whilst still learning his trade and transitioning from street fighter to a disciplined and dangerous boxer. He avenged all three.

He is rightly regarded not only as one of the best middleweights of his age but also one of the greatest boxers of all time, inducted posthumously into the boxing hall of fame in 1990. Ring magazine had him as no 11 in the list of best fighters ever and at no 40 in their compilation of the 100 greatest punchers. Known as Escopeta (Shotgun) Monzon had prodigious speed, ruthless punch power, and relentless work rate.

“Monzon destroyed you little by little,’ said fabled trainer, Angelo Dundee. “He is the complete fighter. He can box, he can hit, he can think, and he is game all the way.”

Having worked his way up the rankings in his native Argentina, Monzon traveled to Rome in 1970 to fight the Italian champion, pin-up hero, and Olympic gold medal winner, Nino Benvenuti. He wasn’t given a prayer before the fight. Few had even heard of him. But during the press conference, things took a decisive turn for the outcome of the fight: Monzon claimed Benvenuti had pinched his backside.

Whatever the truth of the matter, there was murder in Monzon’s heart come fight night. Fuelled with the rage and energy of this perceived slight to his manhood, Monzon handed Benvenuti a shocking beat down and ended the fight in the 12th with an enormous knockout. Benvenuti folded like a rag doll in the corner from a sickening, brutal right hand, unconscious. Ring magazine had it as its fight of the year and Carlos Monzon, until that moment virtually unknown outside of South America, became an international star.

Unwisely, Benvenuti called for a rematch, seeking redemption and revenge, but he got such a beating in the second fight that not only did his corner throw the towel in towards the end of the 5th round, but he never fought again.

Monzon went on to defend his middleweight belts a staggering 14 times, holding the title of undisputed champion for 7 years. Unthinkable in the modern era, and surely never to be repeated. Such was his popularity in his homeland that during Monzon’s fights, Argentina would be at a virtual standstill, streets emptied of traffic, all TV sets and radios tuned to the fight.

He retired a wealthy man. $2million stashed in an American bank away from the clutches of the Argentine tax office, a 1700 sq ft ranch, called L’Esperanza (Hope), and a string of apartments in downtown Buenos Aires. His boxing career over, he settled into a world of post-ring celebrity – appearing in films and on TV. An international playboy, dating beautiful women like Bond girl, Ursula Andress, and gaining an appetite for a champagne and cocaine lifestyle unimaginable to the dirt poor starving waif, who scrabbled in the filthy streets of Santa Fé.

But his newfound wealth and fame did not bring him, or indeed those close to him, peace. Monzon’s character flaws, all too evident long before his journey to fame and fortune began, led him on a path to destruction.

Without the discipline of the ring, and unable to channel his natural aggression positively, Monzon was always on the lookout for a slight; surly, and suspicious on his bad days, his tinder box temper, waiting to explode just below the surface. Repeated episodes of violence and damage meant frequent arrests and detentions for the ex-boxer.

On the advice of his father figure and former trainer, Amilcar Brussa, bodyguards were hired. In private, Brussa said they were not to protect him from the public but to protect the public from him.

Despite all the efforts of those around him, the macho mayhem that followed Monzon everywhere he went would eventually lead to murder

The story should have read, “the dark-haired idol to millions who rose from being a shoeshine boy to become Argentina’s greatest boxer, the world middleweight champion from 1970 until his retirement in 1977. “

But in his private life, and especially with women, there was a dark side of unacceptable brutality which ensured that this rags to riches story would not have a fairy tale ending.

He admitted to hitting every woman that he dated. His first wife, Mercedes, known as ‘Pelusa’ (Fluff) shot him twice following a brawl between the two prompted by learning of yet another extra-marital affair, this time with Argentina’s most famous actress, Susana Giménez. He was lucky to survive. One bullet lodged in his shoulder, where it would remain for the rest of his life.

Giminez’s high-profile celebrity and renown did not protect her from the fists of Monzon either, and she would suffer the embarrassment of common knowledge that she was being beaten, often resorting to dark glasses to hide her injuries. After 4 tempestuous years, punctuated with one too many displays of his temper and domestic abuse, she ended their relationship in 1978 a year after he quit the ring.

In retrospect, with all that was to follow, she may have felt that she had got off lightly.

A year later, whilst waiting for a plane to Paris, where he was lionised for his looks and prowess in the ring, Monzon spied Uruguayan actress, Alicia Muniz. This star crossed meeting produced powerful sparks, and they married in a whirlwind of fast romance – the actress bearing him a son.

But on Valentine’s day 1988 whilst on a holiday in the coastal town of Mar del Plata, tragedy struck.

During a drunken, heated argument in the presence of their six-year-old son, Maximiliano, Monzon hit, choked, and strangled Muniz before hurling her off a second-floor balcony where she died on impact. Seeing what he had done, Monzon threw himself off, too, breaking his arm and shoulder blade.

Monzon later claimed Muniz fell by accident, but when the coroner’s report came back, it showed that Muniz had been choked to unconsciousness before hitting the ground. The jury at his trial found him guilty of murder, and to the shock of the thousand people squeezed into the courtroom, many openly weeping, and millions of his countrymen, he was sent to prison for 11 years.

Despite the revelations of his abusive, violent rages, and his ill-treatment of women unable to defend themselves against his powerful fighting fists, the legacy of his boxing career ensured his popularity and admiration remained high and intact even whilst incarcerated.

Carlos Monzon was 50 years old and still in prison when he received and granted a request for a sparring session with the actor, Mickey Rourke, then fancying himself as a professional boxer. Rourke took a film crew down to Argentina to capture the event.

But things did not go to script for the erstwhile actor. His bodyguards later sold footage of the session showing the wannabe fighter unconscious in the middle of the ring, knocked out cold by the former champion, who was clearly still dangerous and no respecter of any challenger. Celebrity or otherwise.

Your punch power never leaves you, they say, whilst everything else fades.

Seven years into his sentence, and whilst returning to jail from one of the many, many day releases afforded him for good behaviour and continued fame among prison authorities, Monzon’s car lost control and flipped over several times. Thrown from the car, he and a fellow passenger died on-site before ambulances could reach them.

His funeral prompted an outpouring of national grief, with chaotic scenes. Thousands lined the route as the coffin made its way to the cemetery, through the dust bowl streets of Santa Fe, where he fought his way up from the gutter only to return in death and disgrace, for a defiant deification by those who he had allowed to dream of a better life.

“Dale campeón” (“Go Champ”) they sang. A hero, fallen in so many ways. 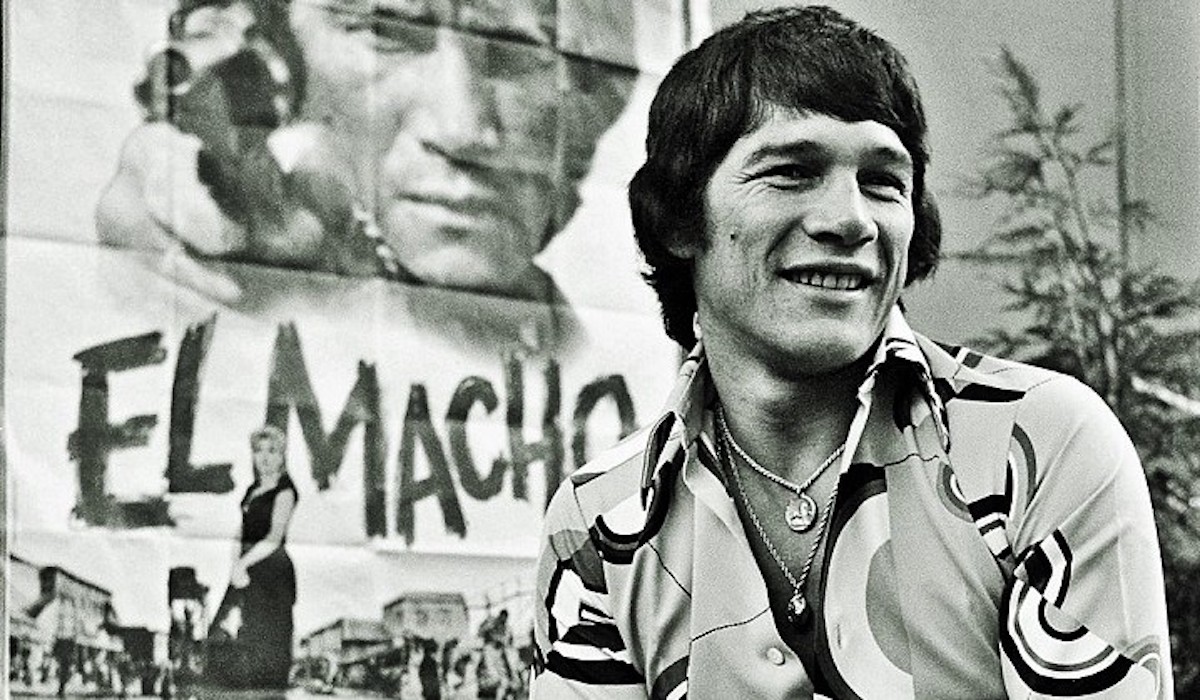