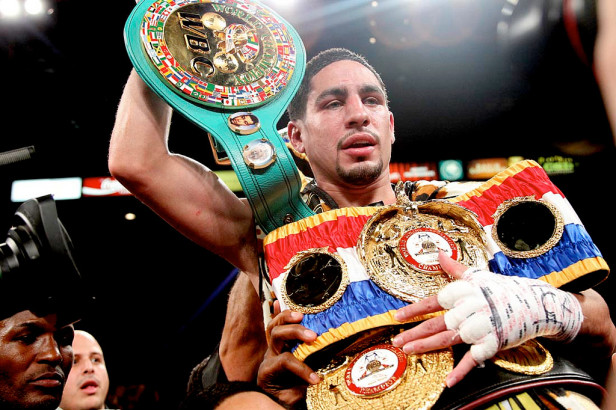 The main goal of competing in the sport of Boxing is to craft a legacy that lives forever in the history of the sweet science, a legacy that acts as a living reminder to fans of the sport of all your accomplishments in your chosen field.
Even in the modern era with financial gain being an added motive to pursue a career as a pugilist, this aim to be an icon in the history books remains  intact as does its place in the ambitions of these fighters. Obviously only a select few of the fighters from each generation will achieve things that warrant legendary status.

The common impression is that if you face the elite in your weight class you will become somewhat of a favourite amongst fans and analysts alike, however for Danny Garcia this hasn’t been the case. Despite him locking horns with the best and coming out on top every time he isn’t a household name and nor does he receive the credit that he should.

There is a thick contingent of   dedicated disciples of Boxing who, despite being aware of who he is and his achievements, don’t value him in the way he should be.

This baffles me as Danny Garcia has achieved too much in his career to not be considered as one of the best. He is an undefeated fighter, who at only 28 has attained a record of 32-0, but its not the record itself that impresses me most.

Its the pedigree he has earned  it against.

Starting out at Light Welterweight he claimed the scalps of Erik Morales via KO and points decision, Khan and Matthyse, while claiming WBA, WBC, and Ring titles all in the process. And now that he is fighting at Welterweight he has defeated two solid and experienced fighters in Paulie Malignaggi and Robert Guerrero and picked up the WBC welterweight belt. He deserves more recognition.

Its a common misconception that Garcia is one of those fighters who doesnt possess any expertise in any one quality, as many writers and analysts state that he doesn’t have great speed or great power, and that he is just a solid combatant.

This isn’t the case,  as we have seen Garcia’s fine qualities displayed in his fights, one example being the heart and character that he utilised in order to recover and knock out Amir Khan. Another example is his solid chin that was able to take hits from Lucas Matthyse.

One rather ignored ability of he holds is the one that enables him to overcome the psychological hurdle of being written off as the underdog, which can break fighters. Despite his success he is still regularly labeled as an underdog in his fights,  he has still come out on top. As well as these traits there are  also abilities such as his great timing and excellent counter punching that have led him to acquiring victories as impressive as the ones that are on his resume.

Now please don’t take this the wrong way, I am not trying to make out like Danny Garcia is a victim of being made out to be a villain in Boxing, nor am I trying to imply that his achievements are completely ignored. The point I am trying to make is that he is unappreciated by fans, and that based off of his resume and achievements he should receive more praise.

Perhaps Garcia’s time of appreciation and adoration is yet to come, it may be arriving in the years on the horizon or it may be even sooner. One thing is for certain, as long as he maintains what he is doing he will have achieved that immortal legacy I spoke of earlier, because if you beat the best opposition you give the public no choice but to respect you.