So, who made the headlines on Day Two?  Well, can only be one golfer right now, and that is Poland’s best-ever golfer in the shape of Adrian Meronk, who after Day One became the first player from that country to lead a European Tour event in any round, well yesterday he co-leaded, today he is leader outright by three shots after he shot a second-round 66 to be thirteen under through 36 holes and now be the first pole to lead two rounds of a Tour event and also after 36 holes too.

It’s a feat that he must be aware of, and also immensely proud of too, his country must be sitting up and taking note surely, he used to be driven by his parents on a seven-hour round trip to play at his golf course in his home country, and now finally it seems to be paying off, and if he could keep his cool and see off the competition by the end of Sunday it would be an incredible achievement and no doubt change his life.

Who are the challengers right up there at the halfway stage?  Last weeks winner of the Joburg Open and first-time winner on the tour, Dane Joachim B Hansen, shot a second-round 64, the best of the day and the tournament so far, to be three shots behind the leader in a tie for second with Englishman Richard Bland, who has shot two 67s, just like last weekend, to be right in the mix.

Promising South African youngster Jayden Schaper is in a tie for fourth and five-shot back after he carded a five-under round of 67, a lot is expected of Jayden who certainly has a lot of talent, and he seems to be coping well in the South African swing, whilst overnight leader, Frenchman Robin Roussel, could only shoot 71 today but is still tied for fourth and five back, so right in it.

And another home player, Christiaan Bezuidenhout, is the highest world ranked player in the field, just like last weekend (61st) and was tied for 33rd at the Masters, well he is in a tie for sixth and six shots back at the halfway stage so he could be another one to look out for.

His story is quite incredible really, he suffered nerve damage and struggles to speak in interviews with a stutter after being poisoned when a soda can he drank from was contaminated, but these battles have certainly been transferred to the golf course in a positive way and his world ranking certainly suggests this.  He would be a popular winner that is for sure.

Special mention to world number 967 Benjamin Follett-Smith from Zimbabwe, who has shot two 69s to be in a tie for ninth, so well done to him, if he can continue that form over the weekend he will no doubt improve that ranking immensely that is for sure!!!

There was some Spanish magic on Day Two as well, Adri Arnaus shot a second-round 67 to jump up eighteen places to be tied for sixth, whilst two others had to shoot good rounds to be here at the weekend, one of those was last years winner and defending champ Pablo Larrazabal, who climbed up 35 places after a 69 in Day Two.

He was four over par after a horrid front nine, which only bright moment came when he struck the pin from the tee on a Par Four, but also found water on another hole, so looked likely to exit after two rounds.  But a battling back nine saw him end the right side of par and he made the cut although is twelve shots off the lead so unlikely to defend his title.

And Adrian Otaegui also recovered from being well over par to end the right side of Par, rising 52 places from Round One to make the cut and be on the same score as his fellow Spaniard and also with the two-time winner in his home country Brandon Stone, who also squeezed into the weekend.

Players to miss the cut who are inside the Top sixty for the Race To Dubai include South African George Coetzee, who ended one over, Englishman Laurie Canter, who ended the tournament at five over par, and Spaniard Jorge Campillo, who had a horror two days and ended shooting twelve over par for his 36 holes, he clearly didn’t get the sprinkling of Spanish gold dust the other three I mentioned had.

Englishman Garrick Porteous had the unfortunate scenario of being the only player in the entire field not to finish his Second Round today due to fading light, so he needs to complete his final hole first thing tomorrow and he is currently one under for his 35 holes so providing he doesn’t totally implode on his final hole he should be fine for the weekend.

Here is the leader board after Day Two…

There are six players tied in, well, sixth, who is Sunshine Tour current best-placed player here Ockie Strydom, Follett-Smith, who I have already mentioned, and the ones who don’t appear on the leader board above, Christiaan Basson (SA), Oliver Wilson (ENG), Oliver Farr (WAL) and Sean Crocker (USA).  Oh and Wilco Nienaber is a shot further back after shooting a second-round 67, although it should have been better had he not double-bogeyed the final hole, he is in a decent position heading into the weekend for the second week in a row.

The last word though has to be for the Pole Adrian Meronk who leads the tournament, he is making history so far for his homeland every day and will be a tough one to catch if he continues to play the way he has done so far, moving day tomorrow so will be interesting to see who can make the biggest strides tomorrow and put themselves in contention on Sunday.  We will find out soon enough… 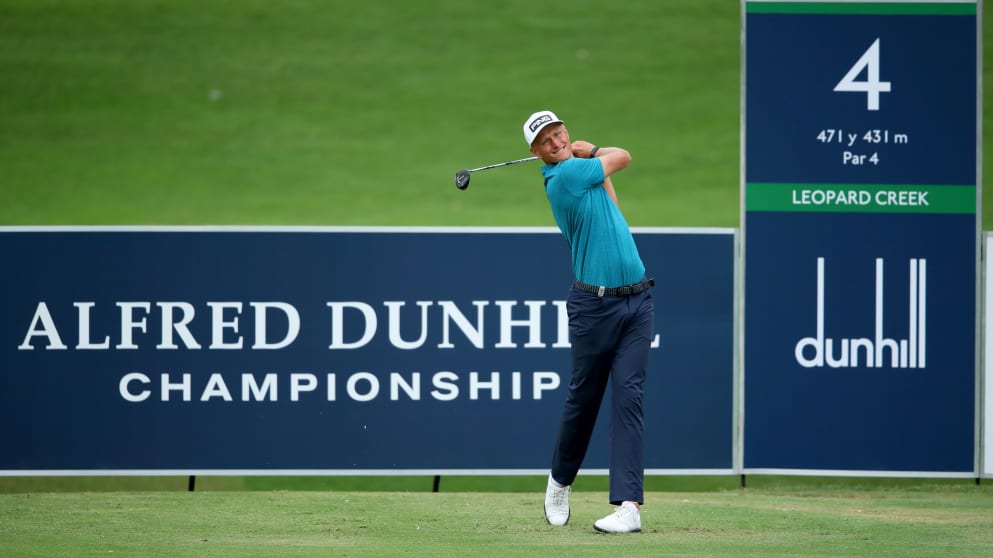