Liverpool could and should have been three goals to the good with just seven and a half minutes on the clock as an electric start from the visitors saw them outgun, outrun and overpower a home side who were simply blown away by Liverpool’s pacy, aggressive, high tempo, high pressing football.

A corner from Trent Alexander-Arnold in the opening minutes found centre half, Joel Matip unmarked on the six-yard spot. The defender should have scored. But with time to pick his spot, his weak header drifted wide in a real let-off for Everton.

A couple of minutes later and Liverpool took the lead. Everton sloppily gave the ball away in their own half. Robertson picked it up and shared some neat interplay with Sadio Mane on the edge of the area before the dynamic full-back found captain Henderson alone on the 18-yard line. He connected beautifully, using the pace on the ball to start it out wide left and curl it back into the bottom corner of the net, evading Jordan Pickford’s despairing dive.

Back came Liverpool, sensing the jugular. The ball fed to Sadio Mane on the left. He toyed with Everton defenders before crossing for Mo Salah whose first-time shot was brilliantly saved down to his right by an overworked Pickford in the Everton goal.

Salah should have doubled the lead moments later when Sane’s cross from the right arrived to him as he stood virtually on the goal line. It should have been a tap-in and wrapped up the points for Liverpool. Inexplicably, he missed an open goal and skied the ball high into the Everton fans.

On 17 minutes though, he made amends and Liverpool doubled their lead.

Everton’s Doucouré dithered in midfield and the ball broke to Henderson who played a first-time pass into the path of Mohamed Salah. The Egyptian forward had the freedom of Goodison Park to bear down on the Everton goal. With great aplomb, he hit the top of the net with a swerving left-foot finish that left Pickford with absolutely no chance and scored Liverpool’s 500th goal under Jurgen Klopp in the process.

Cue an exodus from Everton supporters who had seen enough of their team being ruthlessly put to the sword and after just twenty minutes began to leave the stadium.

ALSO READ:  Will an independent regulator save football?

Such was Liverpool’s total and utter dominance at this stage that what happened next seemed surreal. From having been possibly five-nil down, Everton pressed Liverpool on the right as we approached halftime, and the ball came to Richarlison. His first-time ball found the run of Demarai Gray, who stabbed the ball between the legs of Allison to score Everton’s first goal in five and a half hours of football to drag themselves back into the game.

As the referee blew the halftime whistle after a breathless forty five minutes, the Everton fans suddenly found some belief that their outclassed team could turn things around.

If they were expecting a response in the second half, and in fairness, Everton did begin taking the game to Liverpool, all hope was extinguished on the hour mark.

From a corner to Everton, Demarai Gray volleyed a pass back toward his own goal. The ball bounced horribly for the captain, Seamus Coleman who didn’t know whether to stick or twist – head the ball first time or kick it into the stands – He did neither, and the onrushing Salah robbed him, raced forward, and made a no-contest of the one-on-one with Pickford sending the ball unerringly into the net. It was a sublime finish that sent the traveling support into raptures. Quite rightly, the Egyptian was named man of the match.

The discontent among the Everton fans turned to dismay in the 79th minute when a superb turn and shot by Jota arrowed into the Everton net from a tight angle to make it 4-1 to Liverpool.

A flare was thrown onto the pitch in celebration, covering Goodison Park in red smoke. And the exodus that began in the 20th minute now became a full-scale evacuation as Everton fans departed en masse leaving large swathes of the ground empty.

Liverpool fans however were enjoying themselves. Ridiculing the home support and taunting their former manager with ironic renditions of ‘Rafa’s at the wheel’ to the tune of KC and the Sunshine’s ‘Baby give it up.’

Everton had been brutally exposed by a scintillating Liverpool performance, which exorcised the demons of last season’s loss to their city rivals. But it did more than that. It revealed the overwhelming gulf in class, style, and ability between the two sides who are on very different trajectories.

At full time, the boos and chants of ‘sack the board’ mingled with anger towards Rafael Benitez from those of the blue persuasion still left in the ground.

For Liverpool, it was smiles all round. 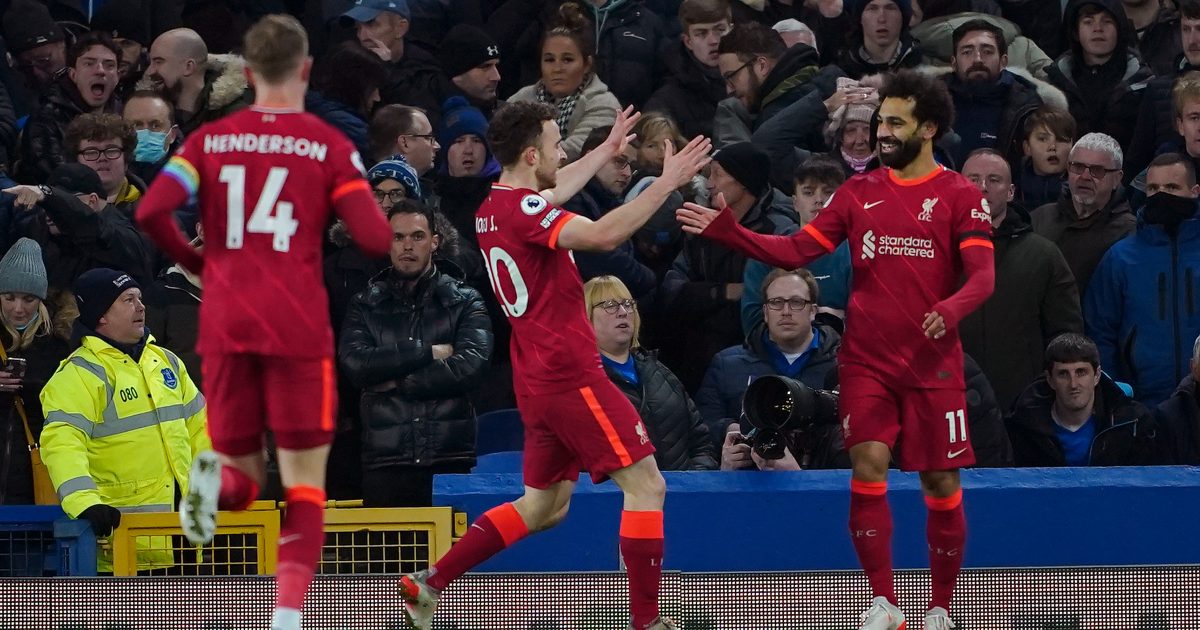