This week’s edition of UFC Fight Night happens to fall on the birthday of recent Rock and Roll Hall of Fame inductee, Jay-Z. Outside of that fun fact, there are plenty of other reasons to watch this entertaining lineup of fights. The main event of the evening features highly touted bantamweight Rob Font against the respected octagon veteran, José Aldo. Without further ado, let’s get into it!

Rob Font took full advantage of the opportunity given to him in May of this year, when he was placed in the main event against Cody Garbrandt. Font’s unanimous decision victory that night gave him a boost in the rankings that he doesn’t plan to relinquish any time soon. He currently sits at number four in the organization’s bantamweight division. He has openly stated that he’s ready for a title shot if and when the UFC decides to grant him one. A win against Aldo on Saturday would extend his winning streak to five fights, making his case for a shot at the belt hard to deny.

In July of 2020, José Aldo fought for the vacant UFC bantamweight title. Unfortunately for him, things did not go as planned and he lost the bout to Petr Yan. That fight marked his third consecutive loss; it was a turning point in his career that could have seen him spiral downward. Instead, Aldo regrouped and came back stronger than ever, winning his next two fights in a row. Fresh off of a victory against Pedro Munoz at UFC 265, Aldo is once again in the hunt for a shot at the championship. Although he’s the underdog going into Saturday’s bout, an octagon savvy veteran with his experience and resolve should never be underestimated.

Lightweight prospect, Brad Riddell, has amassed an impressive ten and one record since his professional debut in August of 2013. While eleven fights over an eight year time span amounts to a very inactive fighter, Riddell has been impressive when he’s put his skills on display. His last loss inside the octagon occurred in July of 2018; since then, he’s won seven consecutive fights. After only four fights in the organization, he’s already ranked 12th in the UFC’s lightweight division. If he fights more frequently and continues to perform well, he has a realistic shot at becoming a top ten fighter in what is known as the organization’s most talented division.

Rafael Fiziev has a professional Muay Thai record that is even more impressive than his mixed martial arts resume. He has a record of 29 wins and four losses against the sport’s most talented athletes. In the world of mixed martial arts, Fiziev is someone no opponent should overlook. He’s won his last four fights and is still only 28 years old. For a fighter who hasn’t even reached his prime to be as stylistically versatile as anyone in the sport is an impressive feat. One wrong move against Fiziev and opponents will quickly learn that against classically trained fighters, mistakes are not forgiven.

Clay Guida starred in a nationally televised ad for Safe Auto Insurance in the early 2010’s. The video became popular on YouTube after it was taken off of the airwaves. Although he’s never been given a title shot in the UFC, starring in a tongue-in-cheek insurance commercial at least guarantees Guida another claim to fame. Saturday’s bout takes place four days before his 40th birthday. Having lost three out of his last four fights, the time has come for Guiday to seriously consider retirement.

Like his opponent, lightweight warrior Leonardo Santos is past his prime fighting years. At 41 years of age, he’s closer to the end of his career than the beginning. However, prior to his loss to Grant Dawson in March of this year, Santos had won six consecutive fights. He appears to have more fuel left in the tank than Guida does at the current moment. It will be interesting to see which of these two aging fighters will emerge from the octagon victorious on Saturday.

Jimmy Chute was once the reigning light heavyweight champion in the HEX Fight Series organization. Holding a championship belt in his native Australia gave Chute the opportunity to compete for a UFC contract on The Contender Series. Since earning a contract in the world’s biggest mixed martial arts organization, Chute has seen limited success, compiling four wins and two losses. He’s got a long way to go if he’s going to become a contender for the championship belt; a win on Saturday could do a lot to help his cause.

In June of this year, Jamahal Hill suffered a dislocated elbow at the hands of former school teacher, Paul Craig. Fortunately, the injury was not as bad as it first appeared; it initially looked as if Hill had suffered a gruesomely broken arm. Six months after that setback, Hill is climbing back into the octagon with a chance to redeem 2021 as a calendar year. His resilience in recovering from injury and returning back to competition should be applauded.

At 6’2″ tall, Brendan Allen is a tall middleweight. The reach advantage and potential elusiveness that his height affords him against him opponents is reminiscent of a prime Tommy Hearns. At only 25 years old, he’s already had 21 professional fights; he’s only been defeated inside the octagon four times. A Black belt in Brazilian Jiu-Jitsu, opponents know they are not only matched up against a young, athletic warrior, they’re also facing a skilled technician as well. Many pundits think Allen is a future star in the middleweight division. A good performance on Saturday would go a long way in solidifying that statement.

Chris Curtis is returning to the octagon less than a month after making his UFC debut during the undercard of Usman vs. Covington II. He is currently on a six fight win streak and seems to be getting better with age. Once upon a time, being 34 years old would be a sign that a fighter would soon decline. However, in recent years there has been an increase in fighters taking a queue from George Foreman and competing well into their 40s.

Veteran welterweight Bryan Barberena has lost three of his last four fights. Meanwhile, Saturday will mark the UFC debut of 28-year-old Darian Weeks. Their bout is a case of a fighter on the decline against a fighter on the rise. However, whatever Barberena lacks in youth and athleticism, he makes up for with knowledge and experience. The classic case of old versus young will play out right before the eyes of the fans when these two warriors meet inside the octagon.

UFC Fight Night can be viewed on BT Sport in the United Kingdom and on ESPN Plus in the United States. As always, we’ll have all the latest updates about the outcomes of the fights as well as in depth analysis available right here at World In Sport! 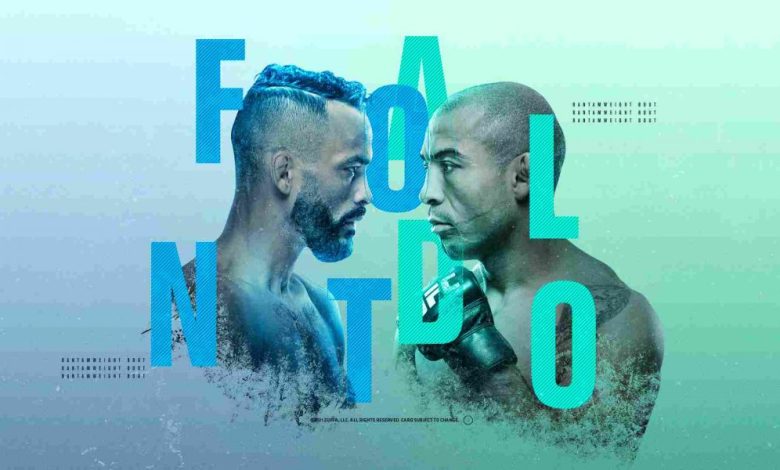