A year after not winning a major title, Luis Enrique’s side can now focus on the final of the Champions League and the Copa del Rey as it aims for a treble of trophies. Messi scored the game winning goal in today’s game which showed how an amazing La Liga season he has had.

The Catalan side dominated for the majority of the first half but took until the 65th minute to open the scoring and clinch the three points needed to seal their 23rd Spanish title with a game to go.

Barca had goalkeeper Claudio Bravo to thank for holding the hosts at bay as they held on in the second half, where efforts from Messi and Neymar could have doubled their margin of victory.

In Barcelona, Real Madrid beat Espanyol 4-1. Real had a great start to the season and was the favorite to win the league but towards the end Barcelona took the lead.

”I think of everyone who has formed part of the club form the start of the season, and above all our fans,” said Luis Enrique.

”This is our chance to make our fans happy, nothing more. It’s time to celebrate. Whether this is the start of a winning era, that’s just a cliche. We have two more finals now, and we will see.

“If we do win them it will be because our players will demonstrate they are the better side.”

Madrid’s win was rendered meaningless by Barcelona’s victory at Atleti. Coming at the end of a week in which Madrid crashed out of the Champions League, watching their rivals secure the title was another bitter, blow.

Next season is the only thing they can wish for. 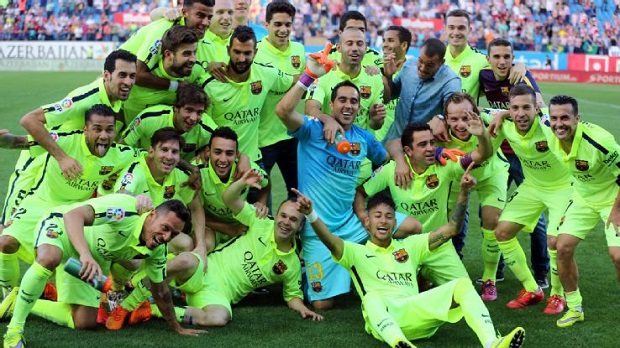