The story of Roberto Baggio is tightly woven into the fabric of Fifa World Cup folklore. The iconic ponytail, 9 goals across 3 tournaments and of course tears after the penalty heartbreak in the final of USA 94… With Qatar 2022 now just days away we take a look at one of 90s football’s biggest stars.

Making his World Cup bow in 1990 on home soil. After being an unused substitute for the Italians opening two group stage victories over Austria and the USA, Baggio finally got into the action in the final group game against Czechoslovakia. Proving to be worth the wait, Baggio instantly made his mark, scoring the 2nd goal in a 2-0 win as Italy romped through the group without conceding a goal.

A 2-0 victory over Uruguay in the last 16 would be followed by a 1-0 win against the Republic of Ireland in the Quarter Final with Baggio starting both.

The semi-final saw Italy pitted against Diego Maradona’s Argentina. With Baggio coming off the bench at half time the game finished 1-1, being decided by penalties. Baggio scored his however he was then followed by 2 Italian misses, knocking them out at the semi-final stage.

In what would have been a slight consolation, Baggio scored his 2nd World Cup to help Italy overcome England in the 3rd place playoff by 2 goals to 1.

When Baggio returned to the World Cup 4 years later, he was a different animal to the one seen in Italia 90. Ballon D’or and Fifa World Player of the Year in 1993, Baggio was arguably at the peak of his powers.

The fact he came into the tournament so highly regarded made it all the more shocking when in the opening group match, Italy lost 1-0 to an inspired Republic of Ireland.

The Italians bounced back with victory over Norway in the 2nd game thanks to a goal from Dino Baggio (no relation), however, Roberto Baggio again failed to live up to the hype. After Italian goalkeeper Gianluca Pagliuca was shown a red card after just 21 minutes, Roberto was the man sacrificed for sub-goalkeeper Luca Marchegiani.

A 1-1 draw followed with Mexico, meaning that for the first time in World Cup history all 4 teams in the group would finish on level points. Going down to goal difference, Mexico would top the group, Ireland 2nd and Italy despite finishing 3rd in the group would progress as a lucky loser.

Such a disappointing group stage performance from Italy was not expected and as such brought with it the inevitable barrage of heavy criticism for their star man Baggio. Including Juventus president, Gianni Agnelli going so far as to call Baggio “a wet rabbit”.

In the last 16, Italy and Baggio had a point to prove… the opponents? Nigeria. For a long while it looked like being another flat, disappointing display from the Italians, Emmanuel Amunike giving Nigeria the lead 25 minutes in. With time running out however, Roberto Baggio finally sparked into life. Firstly scoring an 88th-minute equaliser to take the game to extra time, Baggio then doubled his tally from the penalty spot in the 102nd minute sending Italy through.

It seemed all that criticism of Baggio hit lit a fire under the ponytailed genius as in the quarter-final he once again was the match winner, scoring in the dying minutes to give Italy a 2-1 victory over Spain.

In the semi-final, Italy were up against the tournament’s surprise package, Bulgaria. With the build-up to the game being focused around Hristo Stoichkov and Roberto Baggio. It was Baggio who was once again the match winner, a quickfire double giving Italy a 2-0 lead before Stoichkov pulled one back for Bulgaria from the penalty spot. Italy held on for a 2-1 victory and a spot in the final versus Brazil.

Unfortunately, it wasn’t all positive as had first seemed after the semi-final win. Baggio had suffered a pulled hamstring during the match meaning Italy manager Arrigo Sacchi now had a big call to make… risk playing a not fully fit Baggio or drop the man who had almost single-handedly got them to the final. After some pain-killing injections, Baggio was deemed fit to start in the biggest match of his life.

With Baggio not quite at his brilliant best, Italy struggled to really threaten Brazil. The match ended 0-0, meaning that the World Cup would be decided by a penalty shootout. With the score at 3-2 to Brazil in the shootout, Baggio stepped up knowing that if he missed he would hand the Brazilian’s the World Cup. As Baggio made the lonely walk from the halfway line to the penalty spot, the full attention of the 94,000 in attendance and the eyes of the world were solely on him.

In a cruel twist of fate, Italy’s player of the tournament was the decisive factor in his team losing the final as Baggio blazed his penalty over the bar. A visibly distraught Baggio gave us an image that become synonymous not only with the World Cup but with Baggio himself. Speaking on it in later life he said “I knew what I had to do and my concentration was perfect. But I was so tired that I tried to hit the ball too hard.”

The 1998 World Cup represented a shot at redemption for Baggio and in the opening group match, he immediately banished the penalty miss from 4 years previous with a goal from the spot in a 2-2 draw with Chile.

Baggio’s final World Cup goal would come in the form of a 90th-minute winner over Austria in the final group game, firing Italy to the last 16. Not featuring as Italy beat Norway 1-0 to progress to the quarter-final, Baggio would return to the side off the bench versus home nation France in the quarters.

With the match finishing 0-0 Italy’s fate would once again be decided by a penalty shootout. Despite Baggio stepping up and scoring from the spot, he couldn’t prevent his country from suffering penalty heartbreak at a third successive World Cup.

With that, the World Cup career of one of its most memorable stars was over. Scoring 9 goals in total over 3 tournaments, Baggio shares the record for most Italian goals along with Christian Vieri and another of our World Cup Heroes, Paolo Rossi and to this day Baggio remains the only Italian to score in 3 different editions of the World Cup.

Don’t forget we are taking a look at a different World Cup Hero every day between the end of the Premier League and the start of Qatar 2022 so check back tomorrow to see who’s next. 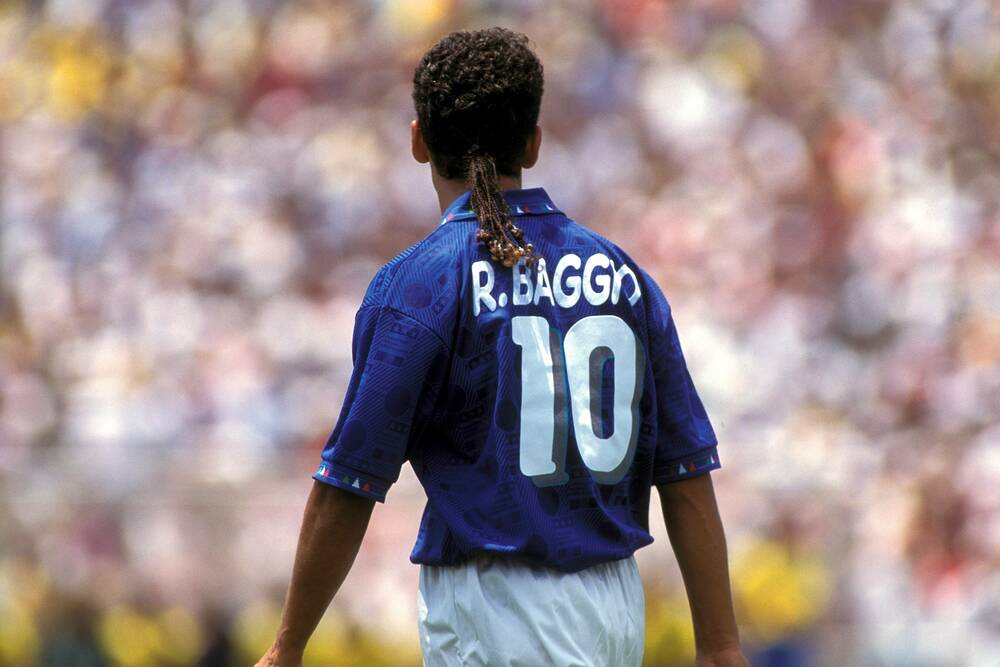