Hungary have made it to the final of the FINA World League after beating Canada 14-10, setting up a tasty final with the USA.

Despite losing to Canada earlier in the week, Hungary were the bolder side in the semi-final, converting more of their chances and putting their bodies on the line in the blocks. Canada were by no means poor, but even their coach David Paradelo would agree, that they were too sheepish and didn’t dominate the game in the ways they know they could have.

Hungary will no doubt be the underdogs going into the game against the USA, but Attila Biro will certainly be proud of the fact that, at the very least, his side will return home with silver around their necks.

FINA Women’s World League: USA Through To Another Final After Trouncing Russia (worldinsport.com)

The first big chance came when Hayley Mckelvey was excluded, but Rebecca Parkes shot went straight at the keeper. Canada then broke forward and enjoyed a man-up of their own that they scored. Monika Eggens got the goal, but in large part, Alda Magyari should have done better.

Canada then grabbed another a minute later from a curling effort from Kyra Christmas. The Calgary Renegade player shot from position two with a low drive into the bottom left corner.

Hungary had a chance to score from Greta Gurisatti, but her shot was saved easily However, less than a minute later, she toyed with Jessica Gaudreault with a few fakes, before slotting the ball into the top left corner.

The score was then made 3-2  to Hungary thanks to two goals back-to-back by Natasa Rybanksa. The first was a central strike from Kindred Paul’s exclusion, whilst the second was a 2m post goal from Kelly Mckee’s exclusion.

McKee was excluded again, giving Hungary another man-up play that they did not waste – Dorottya Szilagyi converted from a great team move that involved several quick passes. But Canada made it 4-3 immediately after, thanks to a precise bounce shot at the near post from Shadow WP’s, Emma Wright.  Canada nearly drew level with a last-second shot from Shae La Roche, but the Hungarians experienced captain, Rita Kesztheyli came to the rescue with a fine block. The Hungarians had a 4-3 lead after the first quarter.

Hungary continued where they finished off in the first quarter. Kindred Paul’s exclusion didn’t need to give Kesztheyli an excuse to put away a rocket of a shot to get her second of the game.

Canada hadn’t been bad during the first period. In fact, they had played well, making an excellent start to the game. However, you felt the occasion was getting to them, with missed shots from Hayley McKelvey, Gurpreet Sohi and Kyra Christmas all contributing to what looked like a very apprehensive performance.

Both keepers made excellent saves in the quarter, with Magyari saving a powerful strike from McKelvey at one end, and Jessica Gaudreault pulling off an acrobatic save from Kesztheyli at the other end.

But all the nerves Canada were showing were put on hold, thanks to a well-placed nearside shot from Kelly McKee making the score 5-4.

But no sooner did Canada score did Hungary reinstated their two-goal lead. Three convincing fakes from Ferencvaros player Anna Illes were enough to pass Gaudreault in the Canadian goal.

Two goals in the last seventy seconds of the quarter took the score to 7-5. A lovely finish from Shae La Roche was cancelled out by Aniko Gyongyossy’s rebound from Kesztheyli’s shot that rattled the bar. In the phase of play that the BVSC player Gyingyossy scored, Canada’s keeper, Jessica Gaudreault, appeared to take a heavy blow to the face – meaning she was subbed for Claire Wright. Canada’s coach, David Paradelo, was keen to point the injury out to the referee, but instead of their sympathy, he was shown, quite harshly, a yellow card.

At the start of the third period, Hungary struck first. Greta Gurissati set a second pit and improvised quite brilliantly with a backhand past Jessica Gaudreault, who by this time, had got back in the pool.

But Canada again scored to make it 8-6 with questionable keeping from Magyari. Kyra Christmas aimed straight above the keepers head, and Magyari couldn’t reach the ball in time.

Then there were a flurry of goals. Hungary then received a penalty after a double exclusion from Lemay-Lavoie and Wright. Rita Kesztheyli happily tucked the ball away to get her second.  But Canada, who had grown in the game looked determined to push Hungary right to the edge. A gorgeous lob from Emma Wright sailed into the far left-hand corner, taking the score to 9-7. Anna Illes got her second goal from the perimeter for Hungary shortly after.

A pivotal section of the game was when Rebecca Parkes expertly turned Paul Kindred for her third major and a penalty. Dora Leimeter of BVSC did the business from 5m to take the Hungarian’s advantage for the first time to four. Dorottya Szilagyi then made the gap five with a cheeky no-look cross cage shot from the left-wing.

Whilst Canada again came back via a Kyra Christmas penalty, Hungary were determined not to let the opportunity of a place in the World League final slip. Rita Kesztheyli calmly lobbed the Canadian keeper, Gaudreault, from close range to make the score 13-8 to Hungary.

Canada needed something to halt Hungary’s dominance and they found this via a timely strategical break that allowed them to prepare a 5 on 6 set-piece that gave captain Monika Eggens her second goal of the day. Hungary could have really asserted their dominance right at the end of the third quarter, but Anna Illes was denied by an excellent reaction save from Canada’s substitute keeper, Claire Wright.

Canada nearly had the perfect start to the quarter with a man-up from Gurisatti’s exclusion, but Emma Wright could only hit the post, before the rebound shot from Elyse Lemay-Lavoie was somewhat remarkably saved by Alda Magyari between the Hungarian sticks.

The point of the game that probably ended Canada’s hopes of a FINA World League Final was when Auxelle Crevier was sent out from the pit, by which Hungarian coach Atilla Biro called a time-out to ensure his side converted the extra-player chance. In a well-worked move, the reliable Rita Kesztheyli scored with a dynamic cross-cage shot that beat Claire Wright that rustled in the inside netting.

Shae La Roche did score emphatically from the left-hand side for Canada, but with less than two minutes to find four goals, the task was too great for this very talented, but apprehensive, Canadian side. Monika Eggens then thought she had found another goal for the Maples as she rifled in a shot from what appeared to be well outside 6m, but the referee’s judged the shot to be illegal.

The game finished, and Hungary was victorious.

Despite the defeat, Canada has been impressive all week, and they will have the chance to win the bronze against Russia tomorrow. They will have to put the disappointment from today’s game behind them, as they have every chance of beating Russia, having already done so earlier in the week. 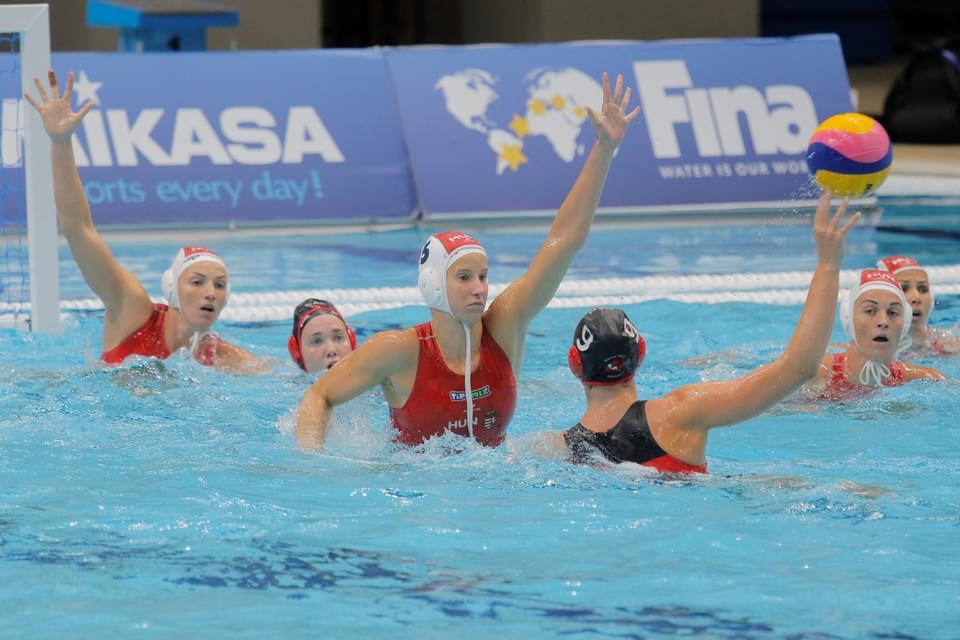