The DFB-Pokal First Round took place last week, and with the Bundesliga yet to start and the teams below the division already having kicked off their league season, it was sure to be an interesting round of matches, as match fitness of the Bundesliga teams was put to the test, having yet to play a competitive game this season.

For those who are unfamiliar with German Football, the DFB-Pokal is the equivalent of the FA Cup in England, where any team can play each other from any division. This sets up the opportunity for winning trophies, teams playing other teams they are unfamiliar with, and perhaps the most exciting of all, the chance of huge upsets for both the fans and the players, especially of lower league teams, to create memories they will remember forever.

In recent years, Holstein Kiel knocked out Bundesliga giants Bayern Munich, Rot-Weiss Essen of the 4th Division beat Bayer Leverkusen, and FC Saarbrücken made it all the way to the Semi-Finals whilst in the 4th Division, knocking out Düsseldorf along the way.

Many other upsets have happened in the past, but with only RB Leipzig and Bayern Munich left to play their First Round games (due to Supercup commitments), let’s look at what can be seen as the biggest shocks from the games that have been played in the First Round in the last week…..

3rd Tier Elversberg overcame a strong Bayer Leverkusen side to progress to the Second Round, causing one of the upsets of the Round. In a starting lineup involving Czech Republic internationals Patrik Schick and Adam Hlozek, as well as highly rated winger Moussa Diaby, Leverkusen were huge favourites against Elversberg, who won promotion to Liga 3 (3rd tier of German football) last season, beating Rot-Weiss Essen 1-5 away from home in the opening round of league matches. Despite the calibre of players on Leverkusen’s side, Elversberg took a shock lead just 2 minutes into the game, with Jannik Rochelt scoring the opener. Leverkusen struck back almost immediately, with Adam Hlozek getting on the score sheet. With Leverkusen looking to win the game comfortably from there, Elversberg were awarded a penalty, which striker Kevin Koffi dispatched, perhaps putting doubt into the minds of the Leverkusen players.

However, once again Leverkusen replied, as Chilean midfielder Charles Aránguiz made it 2-2, once again putting the game back in favour of the Bundesliga side. However, a spirited Elversberg side came back even stronger. Luca Schnellbacher made the score 3-2 going into Half time, and in the 74th Minute, Kevin Conrad scored what would be a winning goal for the 3rd division team. Patrik Schick scored what would be a consolation for Bayer 04, who exit the DFB-Pokal once again to a team in a lower division.

Stuttgarter Kickers progressed to the Second Round of the DFB-Pokal as the lowest ranked team left in the competition after the 5th Tier side knocked out Greuther Fürth from Bundesliga 2, who were recently relegated from the Bundesliga. Fürth, who will look to bounce back to the Bundesliga at the first attempt, are yet to pick up a win in the league after two games, picking up just one point.

In a must-win game for Fürth in terms of improving confidence for the season ahead, they started the game in the worst way possible, as Denis Zagaria put the side from the Oberliga ahead with 9 minutes gone. In a game in which both sides had their fair share of attempts on goal, it was the underdogs who were more clinical in front of goal, as David Braig put the game to bed in the 89th Minute, to create history for the lower league side, beating a team who are 3 divisions above them.

Eintracht Braunschweig of Bundesliga 2 took Hertha Berlin of the Bundesliga all the way to a penalty shootout, where they beat the top division outfit to cause another upset in Round 1.

Hertha Berlin just survived relegation to the 2nd Division last season, after securing their safety in a relegation playoff against Hamburg, so would’ve been looking to put out a strong performance ahead of the Bundesliga season. On the other hand, Eintracht Braunschweig won promotion to the 2nd Division, after finishing runners-up last season in Liga 3, so would’ve been looking to improve their performances even further from last season in order to compete at the next level.

Hertha started the better of the two, with the favourites going in at halftime 2-0 up, through goals from David Selke and Myziane Maolida, and looked as though they would go on to win the game comfortably.

However, Braunschweig fought back in the second half. Brian Behrendt put away a penalty with just over 60 minutes on the clock, and just 3 minutes later Lion Lauberbach scored a second for the underdogs, eventually taking the game to extra time.

Eintracht Braunschweig had the momentum going into extra time after turning the game around, and took the lead within 1 minute of extra time, with former Borussia Dortmund youngster Immanuel Pherai getting on the scoresheet, to put the lower league side 3-2 up. However, the Bundesliga side struck back, with 2 goals on either side of halftime in extra time turning the game back in their favour, with goals from Lucas Tousart and forward Dodi Lukebakio. These two goals looked like the winning goals for Hertha, however, Braunschweig wouldn’t give up, and with two minutes left of the extra 30, midfielder Bryan Henning levelled the tie at 4-4, which sent it to a penalty shootout, which Braunschweig won 6-5 to send the Bundesliga 2 side into the Second Round, whilst knocking out another Bundesliga team in the process, adding more disappointment to Hertha Berlin after a poor season last time out.

ALSO READ:  Can Wiegman’s Lionesses Inspire The Next Generation?
Embed from Getty Images

There were many other notable results in the First Round of the DFB-Pokal. Jahn Regensburg knocked out Cologne of the Bundesliga, making it three Bundesliga teams knocked out in the First round. Borussia Dortmund won 3-0 away from home against 1860 Munich, whilst Karlsruher SC, Paderborn and Borussia Mönchengladbach all put 8+ goals past their First Round Opponents. Holstein Kiel was also knocked out by lower league opposition, whilst Freiburg had to come back from 1-0 down to beat newly promoted Kaiserlautern. With Bayern Munich and RB Leipzig still to play, it is sure to be an exciting Second Round with a variety of teams, with both lower league teams going through and top division teams getting knocked out. 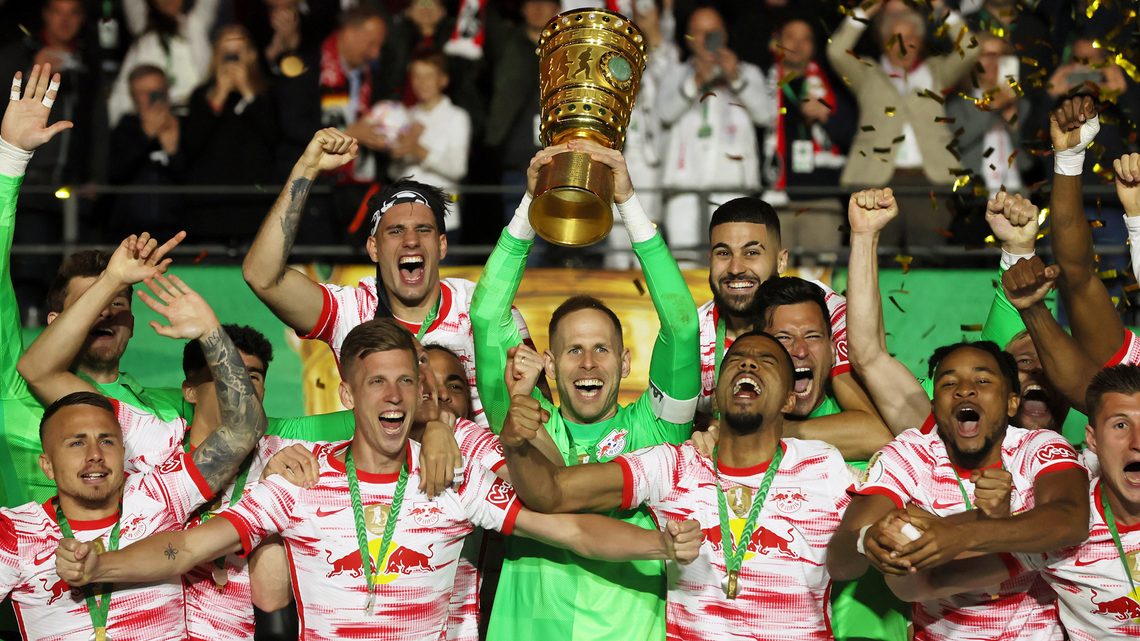