The New York Islander’s three-headed goalie rotation may finally be coming to an end.

Starting goalie for NY Islanders last game had only 1 quality practice in last 5 days before Penguins game. Going on 2 years of this now.

Although he is ambiguous in the tweet, it’s pretty fair to surmise that Walsh was talking about Halak. The veteran goalie had already voiced his own displeasure in being part of a three-goalie platoon earlier this year. That, and the fact that just hours later, Elliotte Friedman reported that GM Garth Snow informed the league that Halak was available.

This year, Halak has played 5 games and owns a record of 2-3-0 with a 3.04 GAA average and .904 SV %. He has one more year remaining on his contract with a $4.5 million cap hit. While those aren’t exactly sparkling numbers, the Islanders have struggled out of the gate and are trying their best to right the ship. Needless to say, Halak’s numbers will not continue to be this awful all year and he’s bound to improve.

However, Walsh does have a fair point. The Islanders are one of a few teams in the league to use a 3-goalie system, and it can be frustrating for the odd man out, who usually doesn’t see a lot of action at all throughout the season. Plus, with all the goalies splitting the practice time, it’s hard for any one goalie to get in a really good practice and get in the groove for upcoming games. For Berube, it also means burning another year in the career of a young player that’s spent on the bench. This type of goalie rotation can also be detrimental to the team in terms of cap hit; a third goaltender obviously takes up a roster spot and cap space that can be used during the season should the team need to make an emergency move for depth purposes.

Halak is a solid goalie, but with a decent option in Greiss and the unproven Berube behind him, it’s probably not worth Snow’s while to trade him unless he can get a substantial return that improves the Islanders right away. As seen around the league this season so far with the Los Angeles Kings, Ottawa Senators and Boston Bruins, goaltending depth is incredibly important to have in order to keep a team afloat when the injury bug hits.

It remains to be seen how much actual interest there is in Halak. Teams that could use a proven starter include Los Angeles, Philadelphia and Dallas.

How the Islanders deal with the unrest in their crease and if Halak will actually be moved is a situation that is definitely worth watching as the Islanders’ season plays out. 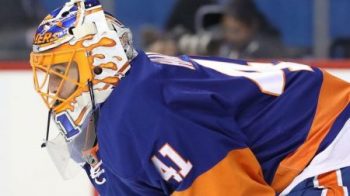