After sitting in line as the race was quickly coming to a close, Hamlin made a quick move to the outside in front of Harvick. Hamlin passed teammate Kyle Busch for third as the field entered Turn 3. As Kenseth went up to block, Hamlin darted to the middle. Kenseth’s car started to slide but he saved it,Hamlin and Truex were left to battle for the win.The top line hadn’t shown much throughout the race, but Hamlin got Kevin Harvick behind him, and the drafting help shoved him toward the front.

“I felt like I had enough momentum to keep him behind me,” Truex explained. “I did all the way up until that last couple feet. He just shot out that last couple inches on me right before the line.

“Wish I would have crowded him up the track a little bit more late down the frontstretch. Those are split‑second decisions. He came out on the right end of it today.”

In Lap 96, an accident occurred between Chris Buescher and Matthew DiBenedetto, who got a bit loose on a turn and crashed into Chris and ended both their days in spectacular fashion. The wrecks of the cars afterwards were a real sight!

Race favorite Earnhardt Jr. crashed out at lap 170, with 30 laps left to go after gathering up the pace for a late challenge.

Just six caution flags, none for major wrecks. The drivers raced hard and for the most part they brought all the cars back in one piece. 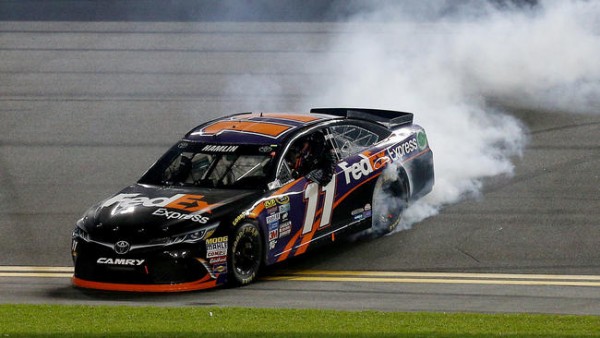