The race to the championship round of NASCAR’s Chase was decided by the rain Sunday night at Phoenix.

In a rain-shortened Quicken Loans 500 that was won by Dale Earnhardt Jr.Earnhardt was eliminated from the playoffs in the second round,so the victory did not help in the Chase.Harvick led most of the race, but Earnhardt gained the lead when the caution flag came out while the leaders were pitting. Advancing into season finale next Sunday were reigning series champion Harvick, Kyle Busch and Martin Truex Jr.They will join Jeff Gordon in the final four,who had earned his spot two weeks ago with a win at Martinsville.Truex and his Furniture Row Racing team advance by a slim five points over Carl Edwards to make the Final 4. Rounding out the top 10 finishers at Phoenix was Logano in third, Jimmie Johnson fourth with Jeff Gordon, Denny Hamlin, Brad Keselwoski and Aric Almirola.

“It means everything to us,” Truex admitted. “What can I say about the whole team and everybody at Furniture Row Racing and everybody back at the shop in Denver. A dream come true for us.

The race had reached halfway and was became official after a nearly seven-hour delay.The race was stopped when heavy rain arrived again on Lap 219 of a scheduled 312 laps. Carl Edwards, Brad Keselowski, Kurt Busch and Joey Logano were eliminated.
“I don’t think it matters what’s fair. If the fans are happy, that’s what it’s all about,” said Team Penske’s Brad Keselowski, when asked if it was fair to settle the final four with a rain-shortened event.
Once the race started, Kurt Busch put himself in a tough spot,as he was sent to the back after being penalized for jumping the start.He worked his way back toward the front, reaching the top 10 near the race’s midpoint.Busch stayed on the lead lap and had worked his way up to seventh before the race was called.

“That wasn’t a penalty,” Busch said. That’s a reason to start a survey and right now, I encourage everyone to go on to Twitter, my Facebook, my Instagram and follow it and we’re all going to have a survey. 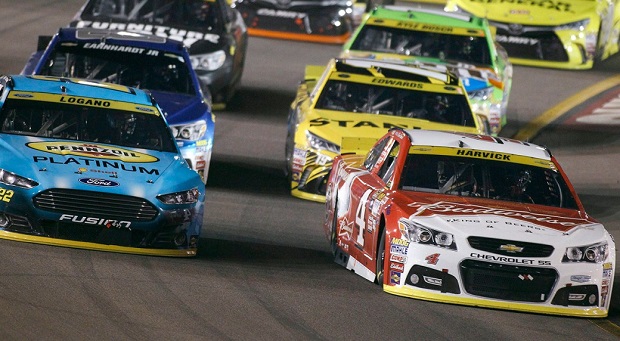