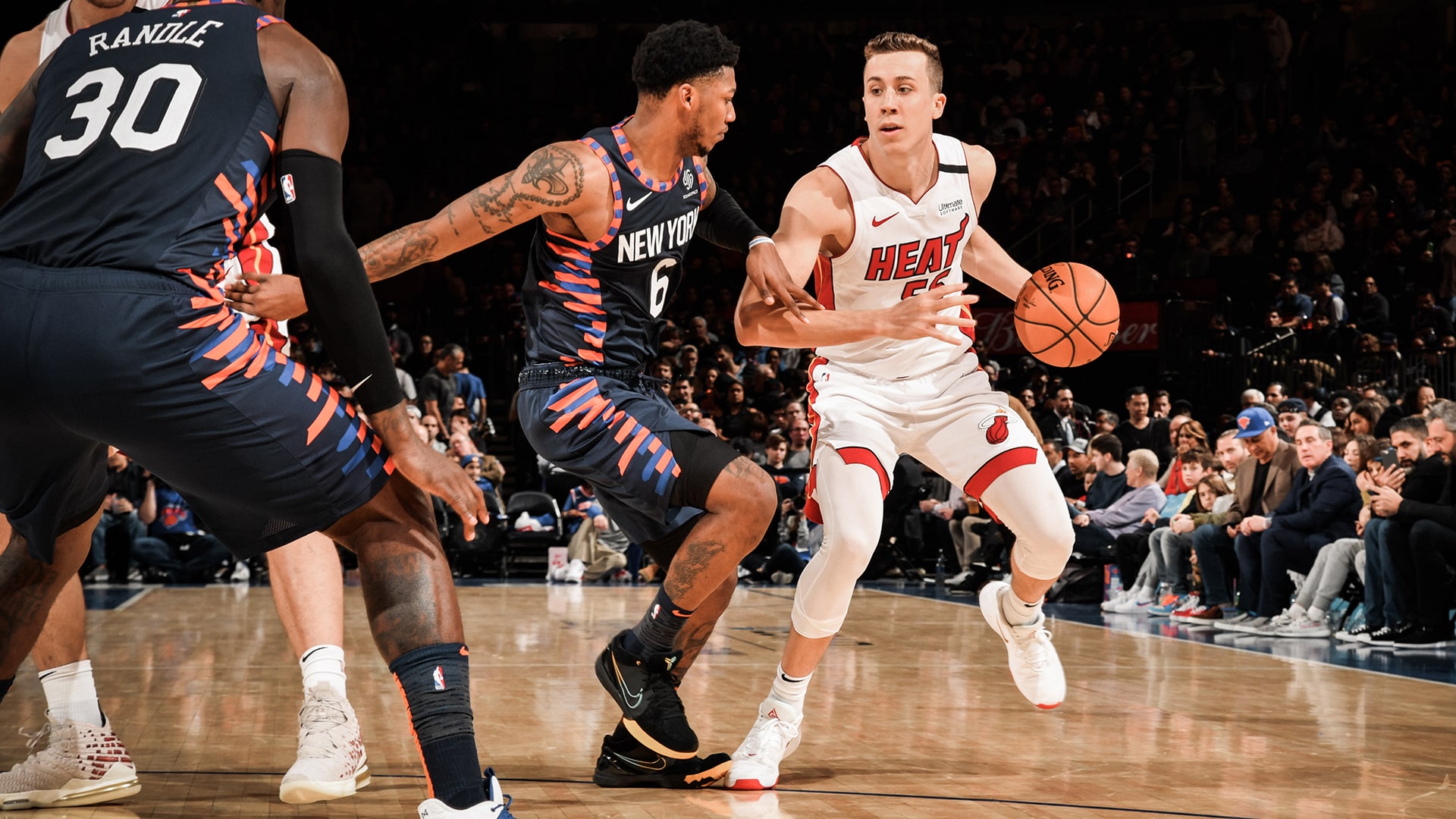 The Miami Heat looked to end their road trip on a high note as they entered Madison Square Garden to face the New York Knicks. In their last game, the Heat defeated the Knicks on their home court. Heading into this game, the Heat were once again without Justise Winslow.

Miami went on a seven to two run to start the game, before Taj Gibson, Julius Randle, and rookie RJ Barrett ended the run for New York, leading to a ten to two run. Heat rookie Kendrick Nunn ended the run with a basket for Miami, followed by baskets from Jimmy Butler and Bam Adebayo. With New York leading 20 to 15, the Heat would close the first quarter on a sixteen to seven run, leading the Knicks 31 to 27.

After Heat rookie Tyler Herro made two free throws to start the second quarter, Kevin Knox and Kadeem Allen took over on offense for the Knicks, helping them tie the game on two occasions before Butler would give Miami a 45 to 43 lead. The Knicks continued to chip away at the Heat’s lead before tying the game at 51. Miami went on a nine to two run to close the second quarter, giving them a 60 to 55 advantage.

In the third quarter, Miami started to pull away from the Knicks with a dunk from Adebayo and three-pointers from Duncan Robinson. With Miami leading 68 to 59, the three-pointers were falling for the Knicks as Reggie Bullock knocked down a few to bring the Knicks within range of taking the lead from Miami. Nunn would answer back with a few baskets and layups for the Heat, giving them an 81 to 70 lead. Randle and Barrett carried much of the Knicks’ offense throughout the third quarter, while contending against the Heat. The end of the quarter saw James Johnson knock down a buzzer-beating three-pointer to give Miami a 94 to 84 lead.

As the fourth quarter commenced, the Knicks jumped out with an eleven to five run against Miami, who were now leading 99 to 95. The Heat would restrengthen their lead with buckets from Herro and Adebayo, but New York answered back with a seven to nothing run. A three-pointer from Robinson ended the run for Miami, followed by another three-pointer from Nunn and a goaltend awarded to Butler, but the Knicks went on another run, scoring nine unanswered. James Johnson ended the run with a three-pointer for Miami, but Gibson and Barrett made a pair of free throws each to keep the Knicks going. Barrett would make two more free throws to put New York ahead 124 to 121. Miami looked to send the game into overtime, but time would run out, giving the Knicks a victory.

Much like the game against Brooklyn, the Heat’s defense collapsed once again, allowing the Knicks’ offense and rebounding to hurt them well into the fourth quarter. A 9-0 run was what sparked New York down the stretch. For the Heat, this is their first back to back loss this season, ending their 10 game win streak for bouncing back after a loss. Miami ends their road trip 1-2, and will have to find a way to bounce back.

For the Heat, Kendrick Nunn made 20 points, James Johnson had 19 points, Tyler Herro and Bam Adebayo with 15 points, Duncan Robinson made 11 points, and Jimmy Butler with a double-double of 25 points and 10 rebounds.

For the Knicks, Julius Randle led the way with 26 points, R.J. Barrett had 23 points, Kevin Knox with 17 points, Reggie Bullock made 16 points, Taj Gibson with 14 points, plus Kadeem Allen and Elfrid Payton with 10 points each.

The Heat return home for a Wednesday game against the San Antonio Spurs. Game starts at 7pm and will be on Sun Sports.

has updated a post."European Football Round-up"
19 hours ago

has published a new post."European Football Round-up"
19 hours ago