Skip to content
You are here
Home > US Sports > NBA > Nunn, Heat Back in Win Column Against Spurs 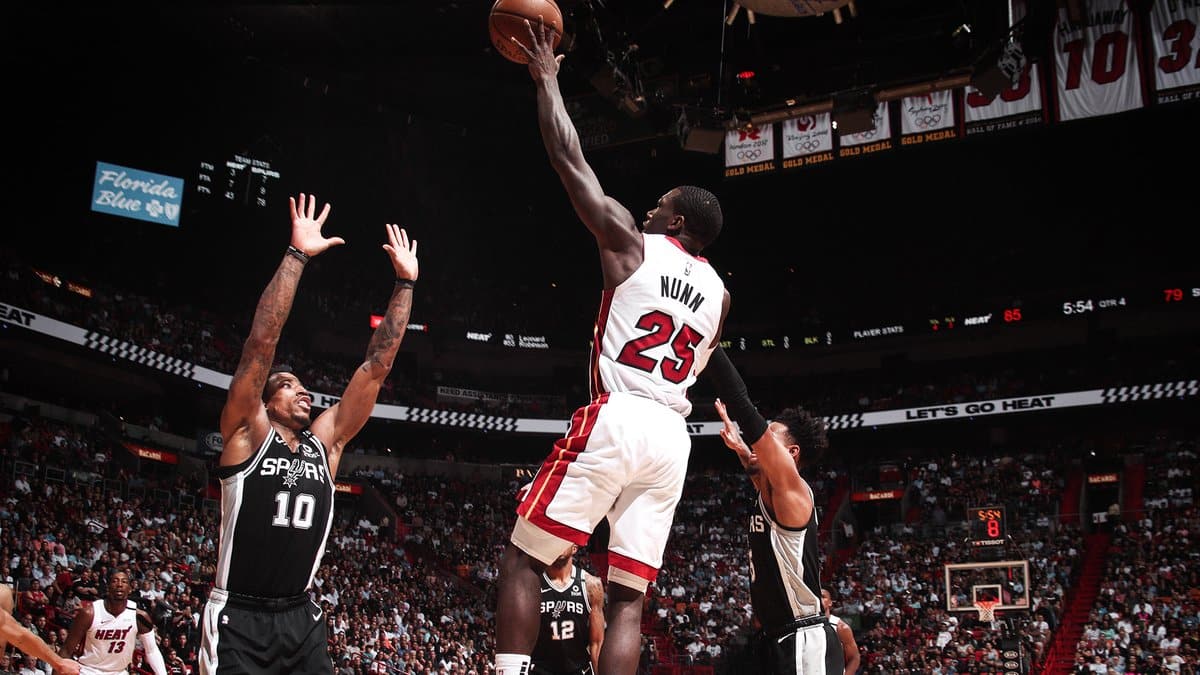 After a rough three-game road trip, the Miami Heat returned back to the American Airlines Arena, where they hosted the San Antonio Spurs. Last season, the Heat took the regular season series over the San Antonio. The Heat would be without Justise Winslow, who is still nursing a back injury, and rookie Tyler Herro, who sat out with a knee bruise.

Bryn Forbes knocked down a pair of three-pointers for San Antonio, while rookie Kendrick Nunn and Duncan Robinson made a basket and a three-pointer respectively for Miami. After a steal and breakaway dunk from Jimmy Butler, Miami continued scoring as Nunn made a floater, followed by a layup from Bam Adebayo, giving them an 11 to 6 lead. San Antonio answered back with a basket from Dejounte Murray and a three-pointer from LaMarcus Aldridge, only for Miami to respond with another three-pointer from Robinson and another layup from Adebayo. DeMar DeRozan got himself going with a floater and two free throws, bringing the Spurs close to Miami’s lead. With the Heat leading 19 to 17, they closed the first quarter on a seven to two run, giving them a 24 to 17 lead.

San Antonio looked to close the distance on Miami in the second quarter as Rudy Gay making a free throw, followed by a three-pointer from Patty Mills. Speaking of three-pointers, Goran Dragic knocked down a trio of three balls, keeping Miami ahead of the Spurs with a 33 to 30 lead. The threes continued to fall as James Johnson and Dragic knocked down a few for Miami. DeRozan took over on offense for San Antonio as Miami led 44 to 42. The Spurs went on a nine to seven run to close the second quarter, tying the game at 51.

In the third quarter, Meyers Leonard got himself on the board for Miami with a three-pointer, followed by baskets from Nunn, Butler, and Robinson. After a few baskets from Aldridge and DeRozan, Adebayo caught an alley-oop, giving Miami a 63 to 59 lead. The Spurs went on an eleven to two run, led by Mills and DeRozan, only for it to end with free throws from Butler. Derrick White and Mills carried the Spurs’ offense towards the end of the third quarter, giving them a 77 to 75 lead.

As the fourth quarter commenced, the Heat went on a ten to two run, led by Dragic and Adebayo, taking an 85 to 79 lead. After a three-pointer from Butler and a layup from Adebayo, DeRozan continued scoring for the Spurs. Not to be outdone, Nunn was also contributing for Miami on the offensive end. With the Heat ahead 94 to 83, Mills and DeRozan made a three-pointer each for San Antonio, while Butler and Nunn continued scoring for Miami. With the Heat leading 101 to 93, the Spurs went on a nine to three run, but Miami would go on to win 106 to 100.

If there ever was a need for the Heat to make a bounce back after two tough losses, it had to be on their home court. Miami’s offense and defense looked solid, making the baskets they needed to make, while also making emphatic statements with blocked shots and forcing San Antonio into making offensive fouls. Miami were 41 for 88 from the field, 7 for 13 from the free throw line, and 17 for 40 from the three-point line. It should be also noted that Heat rookie Kendrick Nunn scored 33 points in 31 minutes he allocated on the court, not to mention that the Heat’s 17 three-pointers made were the third most made for the team this season. The Heat are now 18-1 with their home record are back in second place in the Eastern Conference.

For the Spurs, DeMar DeRozan made 30 points, Patty Mills with 21 points, LaMarcus Aldridge had 12 points, Bryn Forbes and Derrick White with 11 points each.

For the Heat, Kendrick Nunn led the way with 33 points, Goran Dragic made 17 points, Jimmy Butler had 12 points, Duncan Robinson with 11 points, and Bam Adebayo with a double-double of 14 points and 13 rebounds.

The Heat will hit the road when they face the Oklahoma City Thunder. Game starts Friday at 8pm and will be televised on Sun Sports.