Liverpool’s start to the 2022-23 season has been turbulent. Having played every single game in the previous season, two wins away from an unprecedented quadruple, Jurgen Klopp’s side has started the following season in an unfamiliar lacklustre fashion.

However, in recent weeks, Klopp has sought to remedy their issues with a new style. A 7-1 win away versus Rangers, and back-to-back home 1-0 wins versus Manchester City and West Ham, seemingly saw Liverpool on the up, but a dour 1-0 away loss to Nottingham Forest put rest to those hopes.

This new system is very unlike anything fans have become accustomed to under Klopp, but not unfamiliar. Klopp’s compact two blocks of four is very reminiscent of the late 2000s Rafael Benitez sides, with circumstances surrounding the respective squads also similar.

The 4-3-3 has become a staple of Klopp’s Liverpool since his first full season in 2016-17. Consisting of a high back line, a robust defensive midfielder, two dynamic central midfielders and a fluid forward line, the high-pressing system has won five major trophies over the past five years. The key to the system, as coined by the title of assistant Pep Lijnders’ recent book, is Intensity.

Yet since mid-April 2022, in the heat of their quadruple charge, this staple intensity began to lack. Slow starts to games, became a consistent occurrence, with Liverpool conceding first in the final four league games of the season, a streak that continued up to the fourth game of the current season.

Reasons for these slow starts and lack of intensity are most likely a combination of burnout after an arduous season and a lack of renewal in the squad. For the past two years, it has been evident to many that this Liverpool side has required multiple new players.

Before the summer there were expectations in the club to make multiple signings. Those positions required included a deputy right back, a pure striker and two new midfielders, one to deputise the surprisingly poor Fabinho and a dynamic box-to-box player (will those Jude Bellingham links ever come to fruition?).

During the summer the right back and striker gaps were filled with Calvin Ramsay and Darwin Nunez, not enough to be a completely successful summer, and the results of this season have reflected that.

To remedy these issues, Klopp has moved away from his trusted 4-3-3. Known as a manager who doesn’t believe in a plan b, only seeking to keep persevering with plan a until it inevitably pays off, the current dire situation, Liverpool’s worst start in 10 years, meant it was time for a change.

4-4-2 has been Klopp’s response. Unlike the formations’ quite simple, dull nature that dominated late 1990’s early 2000’s British football, Klopp’s variation is a much more fluid version, fluctuating between 4-4-2, 4-2-4 and 4-2-3-1 dependent on the phase of the game, whether in attack or defence.

In last Sunday’s 1-0 victory versus Man City, when off the ball, gone was the traditional high line, instead, a deep compact two banks of four was in its place. To prevent passes through the lines, a key weakness of 4-4-2, the midfield pivot of Fabinho and Thiago, alongside the two centre backs Virgil Van Dijk and Joe Gomez, was extremely aggressive in cutting passing lanes, preventing any service to the inform Erling Haaland. The wingers in Harvey Elliot and Diogo Jota provided strong cover to their fullbacks ensuring Man City’s wide players had no joy.

Having won possession, the aim is to transition quickly. Thiago constantly sought to find Mohammed Salah with long balls, while Roberto Firmino would drop from the frontline, to create space and play salah or one of the wingers through, as seen with Salah’s miss early in the second half.

Chance creation was very similar in the midweek game versus West Ham, with Darwin Nunez occupying the striker role, who on another day could’ve easily had a hattrick rather than the one goal.

The compact nature of this new system Klopp has implemented, with fast transitions seeking a clinical striker is very reminiscent of Rafa Benitez’s Liverpool sides during their pomp in the mid to late 2000s. Jamie Carragher, a key member of those Benitez sides, made the same admission, for the first time since 2016-17 under Klopp, Liverpool entered a game versus another top-six side playing as underdogs, rather than on the front foot.

During Benitez’s tenure at Liverpool, the side was renowned across Europe for their pragmatic performances. Their 0-0 draw away against Juventus in 2005, without talisman Steven Gerrard on their road to Champions League glory, is one of the greatest shows of pragmatic tactics and game management in the away goal era. That Juventus side was far superior consisting of multiple Balon D’or and World Cup winners, under the tutelage of one of the greatest club managers in footballing history, Fabio Capello.

It was the 2008-09 season when Benitez had his best league campaign with Liverpool. Employing a 4-4-1-1, the side produced some of the club’s most memorable 21st-century performances until the recent Klopp era. They ended Chelsea’s four-year 86-game home unbeaten run, won 1-0 away at the Bernabeu v Real Madrid, winning 4-0 at home in the return leg, then won 4-1 at Old Trafford just a few days later.

Central to this side’s success was the midfield pivot of Javier Mascherano and Xabi Alonso. The perfect match of off-ball tenacity and on-ball composure, they were able to turn defence into attack within a matter of seconds.

Playing just ahead of them in the number 10 role was Gerrard, who had his best season in terms of production in 2008-09, scoring 23 goals and assisting teammates 10 times.

Flanked by an array of workman wingers in Dirk Kuyt, Ryan Babel, Albert Riera and (often to his anguish) Robbie Keane, they ensured their backline were never outnumbered. Very similar to the roles Elliot and Jota employed against Man City.

The crown jewel of this side was their striker, Fernando Torres. At the peak of his powers as one of the best strikes in the world, he was fed by Alonso and Gerrard’s expert service, through an array of through balls and over-the-top passes. He was a nightmare for defenders best exampled on that March afternoon when he ran Nemanja Vidic and Manchester United ragged.

In Klopp’s present system, the balls played to Nunez are very similar to those that Torres received. when on the pitch Darwin is a magnet for balls in the box, averaging 4.88 shots per game, it’ll only be a matter of time until he’s scoring most weeks.

Ultimately, Rafa’s Liverpool side fell short of major glory due to a lack of tactical ambition and poor squad depth. Off-pitch matters with the ownership did not help at all, with Benitez unable to sign the targets he wanted without selling a player first (who can forget about the Alonso Gareth Barry transfer debacle). With this lack of funding, outside the starting 11, the 2008-09 side was weak.

When the chips were down in their league campaign, often against bottom-half teams, Benitez was too cautious to change his 4-4-1-1 and attack in greater numbers, while when looking at his bench outside the mercurial Yossi Benayoun there were no game-changers.

This meant after only losing two games all season, it was a costly 11 draws, the majority with bottom-half sides, which meant Liverpool fell short four points to the eventual champions, Manchester United.

The following season, with the lack of a solid midfield replacement after Xabi Alonso’s departure to Real Madrid, and a wider lack of investment Liverpool faltered. An already thin squad became further depleted with major injuries to Fernando Torres, with no adequate back up the club was resigned to seventh place and Benitez departed in the summer of 2010.

In the present Klopp faces similar issues. Injuries have ravaged the side so far, meaning a lack of midfield and attacking options are available to Klopp’s disposal, meaning when starting 11 performances are poor there is a lack of options to change games.

This was evident in their recent 1-0 away loss to Nottingham Forest. Key players and Thiago and Nunez were ruled out with minor ailments, they were added to a plethora of players out with injuries. Klopp was left with a less-than-ideal squad, but that is no excuse for the sloppy lacklustre display exhibited. Once behind there was no way Liverpool could come back in the game as the ideal personnel to change the game, Nunez and Thiago, were unavailable.

Star-man Mohammed Salah, playing down the middle had no impact in the game, and was essentially bullied off the ball by Forest’s centre-backs. This is where Nunez would’ve been ideal, his physicality would’ve been a match for what Forest was posing.

The starting midfielders in Curtis Jones and Fabinho possessed no creativity, playing cautiously, seemingly lacking the imagination to play similar line-breaking passes on which Thiago bases his game.

This is where it comes full circle. Just as Benitez’s 2008-09 title charge suffered from a lack of investment, Klopp’s side looks to suffer the same. The compact nature of Klopp’s 4-4-2 promises to be a challenge for top sides across Europe, as Rafa’s 4-4-1-1 did, but to perform consistently at the highest level a squad needs depth, and in their current composition, Liverpool does not have that depth available on a weekly basis.

Liverpool’s poor form this season has arrived through a multitude of reasons and Klopp’s evocation of the old 2008-09 side may bring some big scalps along the way, but ultimately the fact is the weaknesses of this present squad are too much to deal with, without renewal and investment just as Benitez faced in the period of 2008-10. 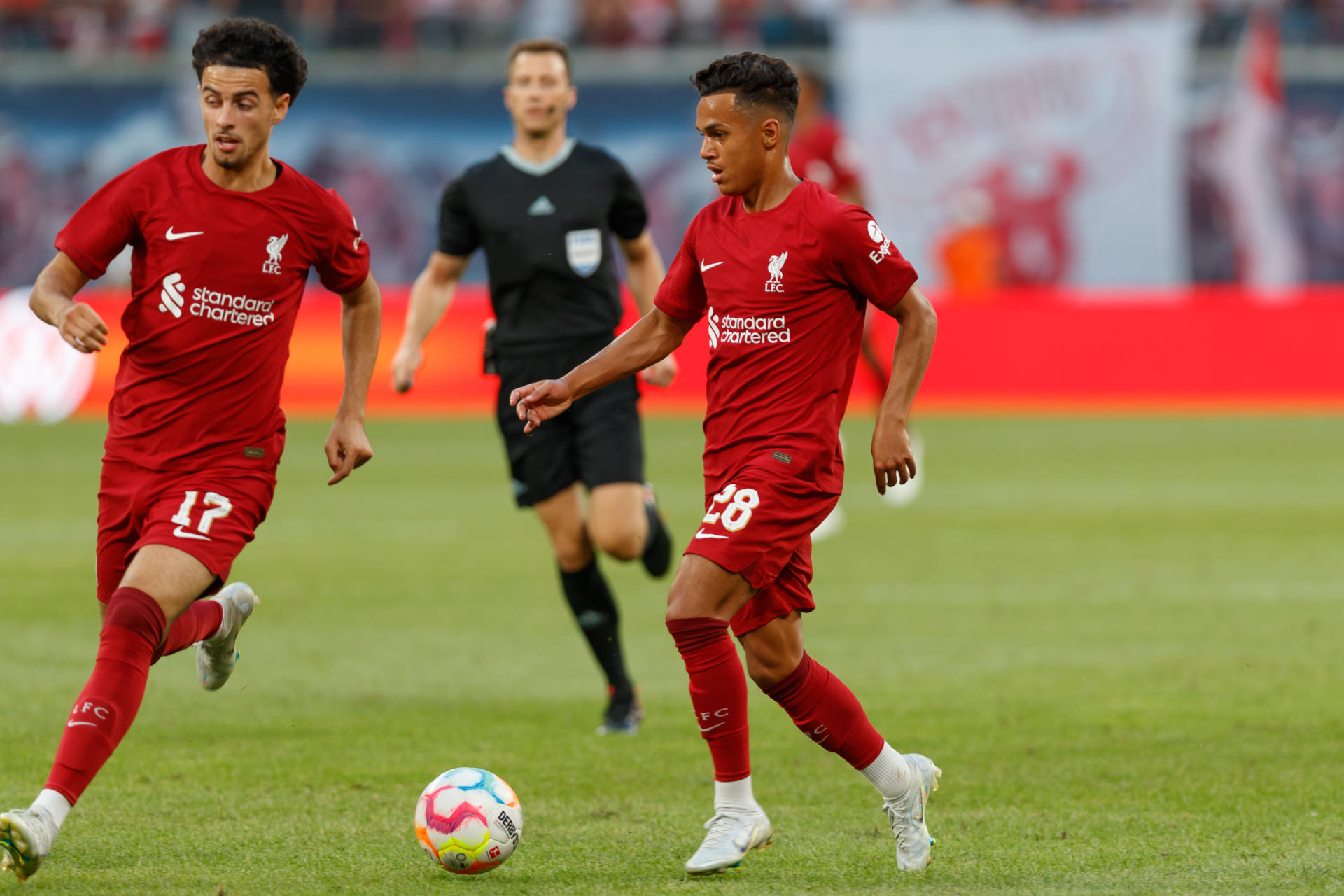