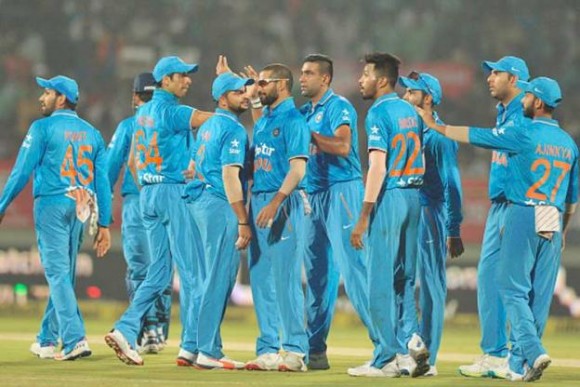 Update on India’s warm up matches played at ICC World Twenty20. India had perfect practice against the West Indies at Eden Garden, Kolkata on 10th march with Rohit Sharma in great form.

India won the toss and chose to bat. Rohit Sharma stole the show by great knock of 98 not out. He was well supported by Yuvraj Singh. He made quick 31 of 20 balls. Sikhar Dhawan also played a useful knock of 21 runs in 17 balls. Rest of batting didn’t support Rohit well.

Ravindra Jadeja, Ajinkya Rahane didn’t trouble the scorers. India experimented with their batting line up. Pawan Negi was sent up the order instead of Suresh Raina. But Negi didn’t bat well.

He only scored 1 run. Raina came in to bat at end of the innings; he came to face last few balls. He was not out on 1 with Rohit holding Indian innings together. India posted a mammoth total of 185/5 in 20 overs. Without Dhoni and Kohli, they didn’t come to bat.

West Indies started off the chase well. The openers gave West Indies a flying start. They put 26 runs on the board in just two overs.

In the fourth over Jasprit Bumrah cleaned up the danger man Chris Gayle and few balls later Shami took the wicket of Charles.

After the openers got out, West Indies lost wickets at regular intervals. After Charles, it was Ramdin and Marlon Samuels. Both wickets went to Sir Jadeja.

Pawan Negi also picked up two wickets. West Indies were reduced to 92/6 in 14th over. Then, Hardik Pandya join the party, he picked up two in his one over. First the WI captain Sammy and then Russell.

The Windies were down and out of the game, they didn’t cope the pressure of chasing this big target under lights.

Harbhajan Singh further damaged the Windies scorecard. He picked up the wicket of Benn for only 8 runs. Nurse also perished to Shami for the same score.

At the end, West Indies were bundled out in 19.2 overs for 140 runs. India won the comfortably by 45 runs with 4 balls to spare.

The opener, Amla and De Kock gave them a decent start with 10 ten in first over of Harbhajan Singh.
Bumrah again who gave India the first wicket. Jasprit picked up the wicket of Hashim Amla for 5 runs.

Later, South African skipper Faf was caught by Jadeja of Shami’s bowling for 12 runs. Quinton de Kock has a liking of Indian attack. The talented youngster is showing his class once again. He punished the Indian bowlers. His partnership with JP Duminy took the game away from India. Their 67 runs partnership tested the Indian bowlers. It was glimpse of real things to come from 15th march.

Hard hitting batsmen David Miller came in to have a go at the Indian bowlers. He played a gusty knock.

He scored quick fire 18 in 11 balls. JP also completed his fifty. He played an entertaining innings of 67 runs of 44 balls. He was finally out in the last over. India came back slightly in game by picking up the wickets of Dekock, Miller and JP.

South Africa posted a huge score of 19 in 20 overs.

India didn’t start well. Rohit Sharma was out early after scoring only 10 runs. He was lbw by Kyle Abbott in the second over.

Virat was joined by Dhawan in the middle. In the next over Virat by caught by Dekock, Steyn took his wicket. India was in deep trouble, Local boy Rahane joined Sikhar.

Again five overs later, Rahane was bold by Imran Tahir for 11 runs. India was desperately looking for a good partnership. It was Raina and Dhawan who took india closer to that target.

They both shared an unbeaten 55 run partnership until they decided to give captain Dhoni and Yuvraj a chance. Dhawan scored well made 73 of 53 and he was well supported by Raina, who made 41 of 26 balls.

But, world best finisher couldn’t finish this game. India needed 14 of last over, india only managed 10. It was Dhoni and Yuvraj at the crease. They both didn’t take India over the line. They lost the match by four runs.

These warm up matches had no live telecast on star sports. The major reason behind this is that the qualifying round matches being played across two groups to determine the last two entrants to the Super 10 stages of the main tournament. And the second reason is, any warm-up match doesn’t have an official status.

The records or the runs that players make are not counted as international runs and records. The ICC feels that giving such matches a preference over the matches from the qualifying stages, which are international T20s performance; it would undermine the importance of this latter.