At the 2018 World Cup in Russia, we saw England a young and talented team reach the semi-finals. They have won the World Cup only once and that was way back in 1966. England has been a team which has always looked in style and has been a class apart from others.

England squad were spotted in March this year at St George’s Park. They were attending a suit-fitting. The team got suited in the three pieces supplied by Marks and Spencer for its third World Cup in a row. We have seen many styles come and go. So Mediaworks, together with Frank Wright a British footwear brand that offers a range of chukka boots find the perfect wear for the England National Team going to the World Cup.

England Team has always been the best when it comes to fashion. Let us now look at fashion trends of the England team during World Cup 1998-2018.

Held in France, the 1998 World Cup saw defending champions Brazil beaten by the host country 3-0 at the Stade de France in Saint-Denis. That aside, did England show up looking smart?

Not really. The official World Cup suits of England were heavily criticised at this year. It was created by British designer, Paul Smith. Back in 1998, the official suit happened to be dreadful with beige in color. Whoever thought it would be a good idea to dress David Seaman, Sol Campbell, Teddy Sheringham in heavy-duty, beige suits and navy shirts obviously didn’t have much idea of it. Could it have been their not so stylish suits that determined their success that year?1998 World Cup was held in France. At the final of this World Cup, we saw defending champions Brazil beaten by the host country 3-0 at the Stade de France in Saint-Denis. That aside, did England show up looking smart?

The 17th staging of the FIFA World Cup was held from May until June in 2002 in the Korea Republic and Japan. England reached the quarterfinals where they were defeated by Brazil. Later on, Brazil lifted the trophy defeating Germany 2-0.

This time, Burton designed a suit that was cut with a slim trouser leg and low-cut lapels to reveal more of the navy tie. The breast of the suit jacket was emblazoned with the traditional three-lion badge, and the suit was made from 100% lightweight navy wool. The official suit also went on sale in Burton’s 376 UK stores on St George’s day, making it accessible and affordable for fans. Off the field, Burton was the players’ official suit provider. The last time Burton designed the England World Cup team suit was the year Bobby Moore captained England to a 4-2 victory over West Germany.

Held in Germany, the 2006 World Cup had Italy winning its fourth title and France coming second after a penalty shoot-out. England reached the quarterfinals again but was knocked out by Portugal.

That year Giorgio Armani stepped up to design the uniform for the England squad, having previously designed official suits for the Italy team in 1998.

Giorgio Armani created an ultra fashionable look for the England players. It consisted of two suits, an overcoat, an avant-garde raincoat, cardigan-jacket, sunglasses and even watches. The collection was designed on a color of navy, light blue, and pearl grey and of course, the famous badge.

South Africa was the host of the 2010 World Cup tournament with Spain coming out as the winner, beating The Netherlands.

Marks and Spencer supplied the 2010 World Cup suits, an encore to their being the official suit suppliers for the English National Football Team and under 21s in 2007. Fabio Capello helped by giving input to designer Timothy Everest.

Through the Alfred Brown weaver label, the team was fitted with a grey, single-layered suit made from pure new wool. Finished off with a black tie, slimming waistcoat, and four-button cuffs, the suit gave the guys a stylish look. Created in collaboration with Savile Row tailor Timothy Everest, the suit marks a break away from the designer attire of previous years.

Hosted by Brazil, England was knocked out in the Group Stage–the first time that had happened since 1958. Later, Germany lifted the trophy, beating Argentina, 1-0.

Marks and Spencer were again in charge of designing the suits. The grey Autograph suit is cut from light and breathable English wool and mohair fabric and features special details: an embroidered World Cup Winner’s star on the inside envelope pocket; the England crest on the Autograph label; and a patriotic red, white and blue sleeve and pocket lining. They wore a decadent Dolce & Gabbana three-piece. A similar one was available off the shelf for $3,345 (£2,473), slightly more than the M&S suit which was priced at £199.

Did the formalwear power England to the semi-finals? We hope. But who knows, for sure? Anyways all the players looked good in the suit. England never fails to enter the news whether its the football they play or the dress they wear. 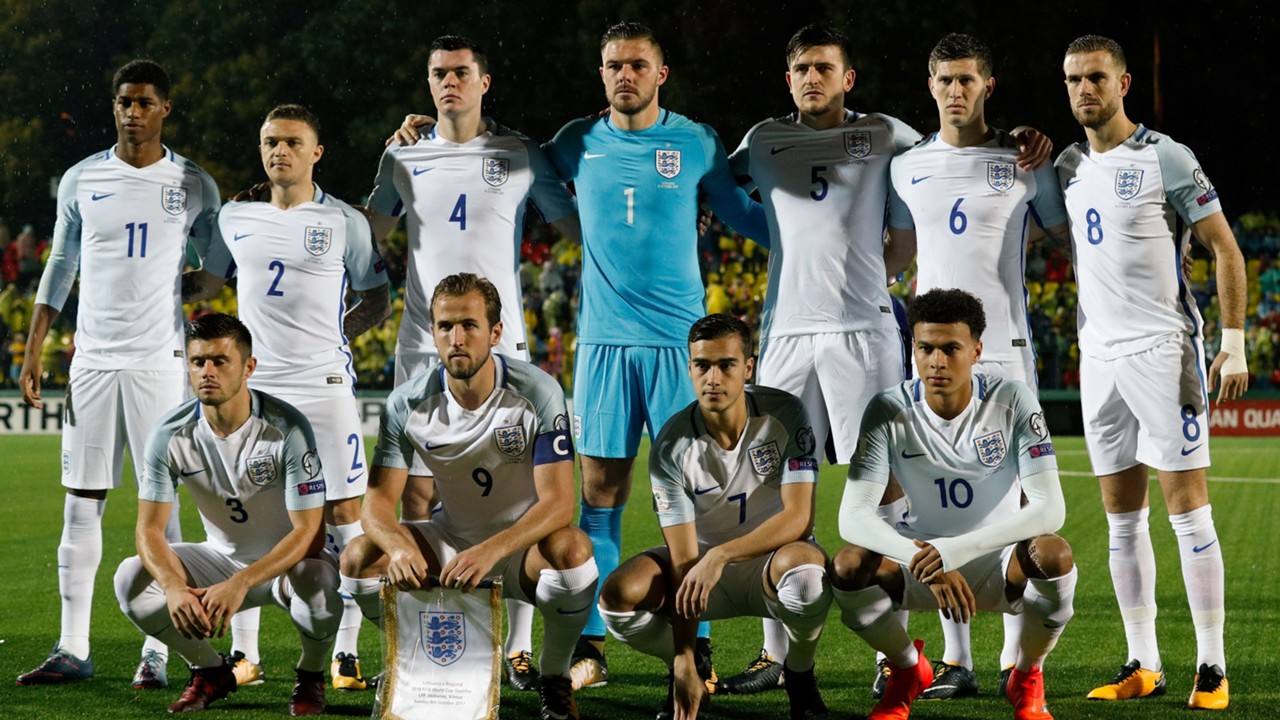