When we think about women’s boxing in the past we think of a fringe sport that was something most of the public didn’t want to see. America was not interested in seeing their daughter raise in pugilism and taking one many characteristics. The sentiment was that there was something wrong with a woman that wanted to destroy her beautiful face in a combat sport. Well, today things have changed with more and more acceptance of women’s boxing around the world, people are tuning in to see these warriors put everything on the line.

Recent boxing superstars like Claressa Shields, Seneisa Estrada, Mikela Meyer, and Katie Taylor have shown the boxing world that you don’t have to wait on the men’s division to finally decide when they want to fight each other to see good fights. Women’s boxing has all the good fights to keep you on the edge of your seat.

What’s even better is that the women aren’t afraid to fight each other! Win, lose or draw these gladiators are putting it on the line to see who the best is and that is worth watching. In the post-Mayweather era, male fighters have become reluctant to fight tough competition to avoid losing their highly valued undefeated record. this has a ripple down effect on the division which makes for mismatch fights, easy knockouts, and lost fans.

Simply put, there is no one to actually get behind anymore. Apparently, the female fight did not receive that email. They are quick to fight one another and quite frequently we see barn burner fights with multiple knockdowns. Many hardcore fight fans including myself will look at an upcoming fight card to see if there are women fighting so that we know for sure there is a fight that is worth watching.

I recently had the opportunity to see Claressa Shield put together an all-female fight card with her headline fight being for the undisputed Super Welterweight World Championship. Her second undisputed title makes her the first fighter in history (male or female) to accomplish this task. The card itself was also spectacular. The fights were competitive and did not disappoint.

The recent growth in women’s boxing has much to do with the increased participation in sports. As the Olympics allowed women’s boxing, there has been a sharp uptick in the number of amateurs turning professional and the number of fighters in each weight class.

We still have room to go until we fully supplement the heavier boxing weight classes but the smaller division is red hot right now. Social media has also played a major role in the development of the sport. Instead of just getting a 2minute post-fight interview you know get to follow your favorite fighter along their journey in training camps, post fights, and regular life. Female fighters have become role models to so many young girls.

As women’s boxing grows and we see more personalities come to light, we will no doubt have a division that will rival the men’s. This will put women in the driver seat and allow for massive paydays and give the fans fights what they want to see. With the next big test in seeing how lucrative the sport can become, it is of the utmost importance to keep these women busy with competitive fights and allow them the TV space to show their skills to the world.

Female headlined cards will be the new business model of the future. This model will attract people to the sports that otherwise would not have interest in it and will allow for the casual fight fan to see what we hardcore fight fans keep talking about. 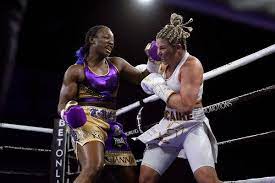