Jimmie Johnson tied Dale Earnhardt Sr. on the all-time NASCAR wins list with his 76th career victory, winning for the second year in a row at Atlanta.

Harvick was about 5 seconds behind when Ryan Newman blew a left rear, bringing out a caution with just two laps remaining, bringing the front of the field to pit road for the final pit stop. Johnson was the first off pit road followed by Harvick and Kyle Busch.

The race ended under caution after a crash involving Aric Almirola, David Ragan and Landon Cassill.Harvick led 131 laps and was attempting to catch Johnson late in the race after a slow pit stop left him 12 seconds down with 40 laps. Harvick spun his tires on the final restart and wound up a disappointing sixth, considering how hed run most of the day.

Johnson stuck out three fingers while driving around on his victory lap.

“It’s such an honor,” Johnson said about tying Earnhardt. “With the chaos at the end, with the crash and the overtime and how it works these days, I kind of lost sight of that. I remembered on my victory lap, and I had to come down and throw a 3 out the window to pay respects to the man. There’s a huge void in my career that I was never able to race with him, but at least I was able to tie his record there.”

Earnhardt Jr finished up second followed by Kyle Busch,Kurt Busch and Carl Edwards rounding out the top 5. Matt Kenseth, who led 47 laps, was black flagged on Lap 125 after a pit stop for illegal fueling. Near the end of the stop, the gas man left the wedge adjustment wrench on the rear deck. This penalty put Kenseth two laps down and he wasn’t able to recover from it.The race stayed green for the first 210 laps, a track record from the start of a Sprint Cup event. 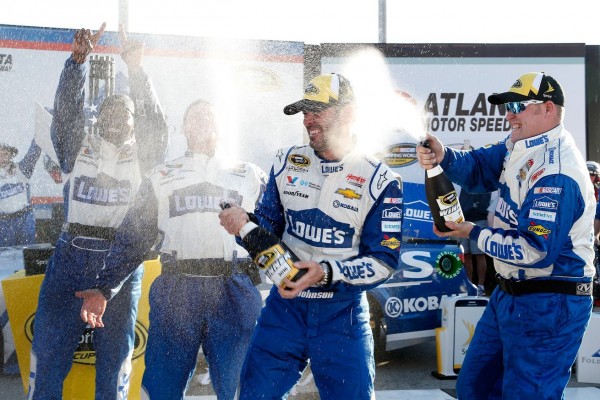