Joey Logano picked up his second win in three weeks and went to victory lane in the Irwin Tools Night Race for the second straight year. Logano faced late pressure from Kevin Harvick at Bristol but was able to withstand it.

Starting off fifth on the starting grid, Logano was among the frontrunners all night, although it was not until lap 225 of 500 that he led for the first time. Harvick finished second for the 10th time this season.

Logano had to battle through lapped traffic at the end of the race but was quicker than Harvick off the corners through the final laps.Harvick has a career-best 17 top-five finishes this year adding to his career total of 250.

“It was kind of interesting to watch it in the mirror, I was watching him drive in and I was like, ‘He’s going to get me eventually,'” Logano said. “It’s so interesting how we ran such different lines and be the same speed on the racetrack.

“It was a very exciting last 20, 30 laps for sure, and neat to be able to get a checkered flag again here at Bristol.”

Keselowski finished sixth ahead of JGR drivers Carl Edwards and Kyle Busch. Both Edwards and Busch were able to lead for large amounts of the race early on and were still fighting with Logano inside the final 160 laps when they were forced to make green-flag pitstops, for a loose wheel and flat tyre respectively.

Busch dominated early on, but ended up dropping a bit as the race wore on. He was nailed with a speeding penalty on the final round of pit stops and finished eighth. Edwards led 74 laps but had a tire go flat when he was out front and it cost him two laps. 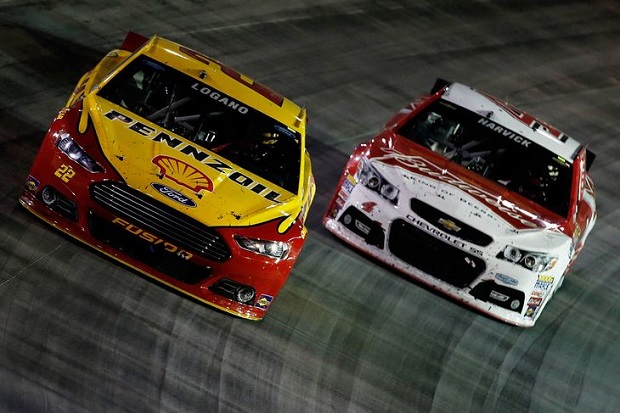