One of the most delayed and eagerly anticipated showdowns of recent times saw 28-year-old challenger ‘Ferocious’ George Kambosos Jnr upset the odds to pull off a stunning victory over undefeated Teofimo Lopez to take the prize of unified lightweight world boxing champion here tonight in the Hulu Theatre, Madison Square Garden in New York.

Both men hit the canvas in an epic back-and-forth encounter in which George Kambosos Jr nearly made good on his pre-fight prediction of a 1st round KO when a big overhand right counter dropped Lopez in the opening period. Lopez survived the early scare and scored a knockdown of his own in the 10th of a gripping contest, but it wasn’t enough to sway the judges who returned a verdict of 115-111 115-112 for Kambosos and 114-113 to Lopez to shock the champion in a thrilling upset win for the rugged Australian.

Lopez, the self-styled ‘soldier of the sweet science’ was returning to the ring for the first time since his own shock win over the previously invincible, Vasily Lomachenko. The 24-year-old New Yorker predicted he would, ‘drink the pain and taste the glory’ on his way to victory against an opponent who many thought did not have the CV to live with Lopez and was merely a stepping stone to a mega-clash with former WBC champion Devin Haney.

But the man from Down Under had other ideas and Lopez found himself in the ring with a determined and rousing challenger in Kambosos who spoke of his, ‘unbreakable mindset’ coming into the fight.

The pre-fight bad blood between the pair, sparked by false starts and nine months of delays in getting the fight on, threatened to spill over several times. Where there’s a will there’s a war, Lopez said beforehand and so it proved with both fighters going at each with brutal intensity, exchanging bombs and increasingly heated verbal exchanges in a pulsating encounter. The referee, Harvey Dock, suffered his own ‘Knockdown’ as he fell over in the process of separating the fighters after the bell at the end of the third round.

In an increasingly bloody battle, Kambosos opened up a cut over Lopez’s left eye in the sixth round that would trouble him for the rest of the fight as blood dripped freely down his face and onto his chest. Several times the ring doctor was called to inspect the wound.

Lopez, behind on the scorecards and sensing the fight slipping away from him in the middle to late rounds found new energy and whipped the hometown crowd into a frenzy in the ninth by pinning Kambosos on the ropes, and unloading combinations on the challenger, who was relieved to be still standing as the bell sounded.

López continued his onslaught in the 10th, finding a concussive overhand right that dropped Kambosos early in the round to blow the roof off the arena. The Australian beat the count but was in serious trouble, scarcely throwing back and now bleeding badly from his own cut above the left eye. With the referee prepared to intervene at any moment, Kambosos somehow dug in and survived to hear the bell to make it into the championship rounds.

It was rousing, stirring stuff and in a remarkable testament to Kambosos’s powers of recovery, the Australian bounced back in the 11th to stem Lopez’s momentum. He peppered Lopez with jabs and straight rights, re-opening the cut above the champion’s eye, and with it blood flowing freely onto his shorts.

Lopez knowing he needed a knockout, went all out in the final round but was continually picked off by eye-catching, sharp counters as Kambosos smartly stayed out of harm’s way and boxed his way to victory.

During the post-fight interviews in the ring, Lopez interrupted the new champion mid-sentence.

You’re a hell of a fighter,” he said. “But I won tonight to “I won tonight, everybody knows that,” As boos rang out among the partisan crowd, Kambosos shot back with ‘you’re delusional brother’ and was cheered to the echo.

Devin Haney weighed in on social media calling Lopez ‘a fraud’, and congratulated Kambosos, inviting him to fight next year. Manny Pacquiao, who sparred many rounds with Kambosos in the build-up to the fight, praised his man for an ‘epic win’.

Promoter Lou DiBella said, “He won tonight, man. Fair and square, he won tonight. In a brilliant performance, one for the ages. And he has something he can be proud of for the rest of his life.”

The unfancied, unheralded 6-1 underdog had promised Lopez ‘a world of trouble’ and in a stunning victory did just that by pulling off the upset of the year in a contender for fight of the year take to ‘all the jewels’ and become unified world champion. 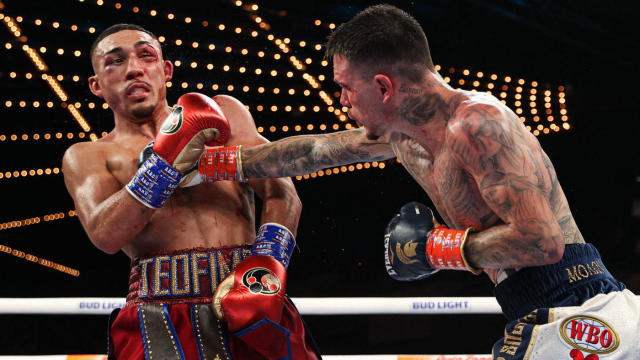