Matt Kenseth won a rain-soaked Food City 500 on a miserable Sunday at Bristol in a green/white/checker finish.The start was delayed nearly 90 minutes because of the rain and the race was stopped three more times, including one delay that lasted almost four hours.

Kenseth hunted down Kyle Larson, fended off Kurt Busch and Carl Edwards and pulled away from Jeff Gordon in the final stretch to win for the first time since September 2013. Kenseth, who led 47 laps, locked himself in the Chase for the Sprint Cup.

He jumped ahead of the field on the final restart on Lap 508 to win by .287 seconds

“It means a lot,” Kenseth says of his return to victory lane.

“Last year was tough and not winning again this year had been tough. I’ve been trying to put myself in a position to finally get one. And I can’t thank my crew enough, who have been doing a great job with this No. 20 Toyota.”

Tony Stewart bumped Kasey Kahne with 18 laps left, wrecking the number 5 that had been one of the fastest all weekend.

The final stoppage came when the race had already passed the scheduled 500 laps, but a quick rain shower had stopped NASCAR’s attempt to race to the checkered flag following an accident with eight laps remaining. So, NASCAR parked the cars on pit road and sent out its dryers to quickly try to give it one more shot. 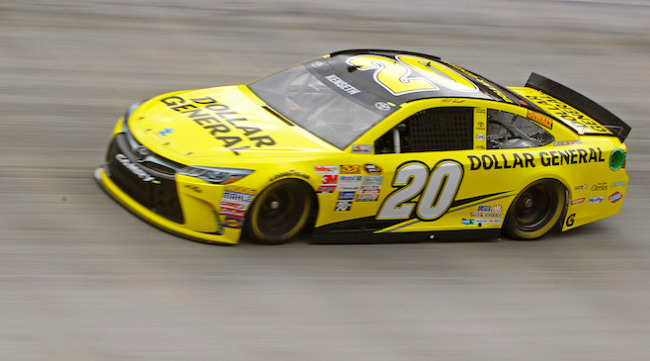