King Kohli is back. The India skipper’s unbeaten 73 off 49 balls powered his side to a comfortable seven-wicket win in the second T20 International against England in Ahmedabad on Sunday.

But hold on. For a change, Virat Kohli was not the talking point of the day. But rather it was Ishan Kishan who made a memorable debut for India smashing 56 off 32 balls coming out to open the innings with KL Rahul, which laid the foundation of India’s victory. The win helped the hosts draw level 1-1 in the five-match series.

India got off to another bad start while chasing England’s 164-6 when left-arm pacer Sam Curran sent back opener Rahul in the first over without scoring. But that did not seem to bother young Kishan. The 22-year-old hailing from the state of Jharkhand, which is former India skipper Mahendra Singh Dhoni’s home state too, started playing his shots from the word go.

He was so dominant on Sunday that his skipper Kohli too preferred to play the second fiddle as he watched and pumped up the wicketkeeper-batsman from the non-striker’s end. The way the duo toyed with the English attack, adding 94 runs in just nine overs, that England skipper Eoin Morgan was forced to fall back on his Plan B and bring back his main strike bowler Jofra Archer back in the attack in the middle overs. But that did not help England’s cause much as Kishan showed tremendous maturity against a world-class bowling attack. The left-hander, who was dropped on 40 by Ben Stokes off Adil Rashid, reached his half-century with back-to-back sixes against the same bowler before the leg-spinner trapped him leg before wicket.

However, there was little respite for England as Rishabh Pant who came in after the dismissal of Kishan, continued to pummel the bowlers with a 13-ball 26, during which he hit two sixes and an identical number of fours. After Pant departed, the skipper decided to take up the responsibility to finish off things. Kohli, who also survived a dropped chance by wicketkeeper Jos Buttler on 10 off Chris Jordan, sealed the win with a four and a six in successive balls to also go past 3,000 runs in T20 internationals in the process.

Unlike the last match, the Indian bowlers put up a much-disciplined effort to restrict England to 164 for six in 20 overs after Kohli opted to bowl. India played one batsman more and dropped a spinner in Axar Patel. However, India’s other debutant Suryakumar Yadav did not get a chance to bat. The Indian bowlers pulled things back brilliantly in the last five overs to concede just 34 runs in those overs.

England suffered an early jolt in the form of Jos Buttler (0), who was adjudged lbw off Bhuvneshwar Kumar in the third ball of the innings. Jason Roy (46 off 35) and Dawid Malan (24 off 23) shared 63 runs off 47 balls to take the England innings forward. But the dangerous-looking partnership was broken by Yuzvendra Chahal in the ninth over when he trapped Malan in front of the crease as India got the review right on this occasion.

England captain Eoin Morgan (28 off 20) was the next casualty as in search of big hits, he edged a Shardul Thakur slower delivery to Pant behind the stumps. At 130 for four in the 15th over, England looked well on course of reaching a near 200-run target but the Indian bowlers bowled brilliantly to concede just 34 runs in the last five overs. Washington (2/29) and Thakur (2/29) were the pick of the bowlers for India. 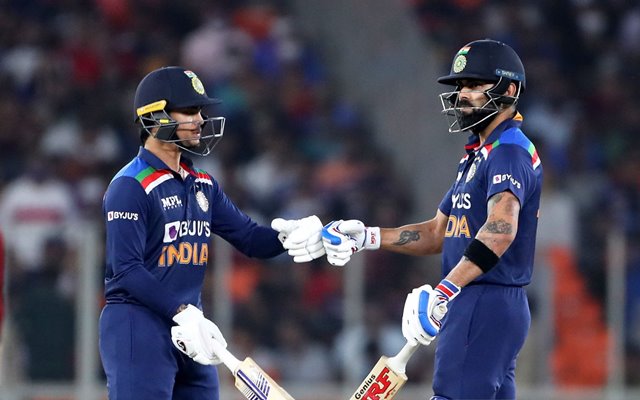