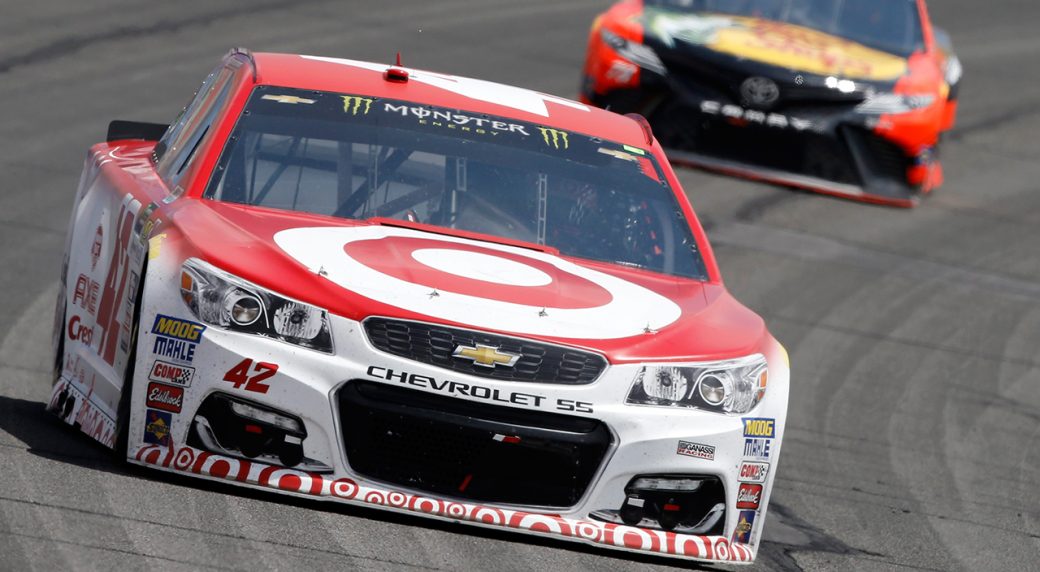 California native Kyle Larson picked up his second ever Monster Energy victory in 115 attempts,which came on NASCAR’s other 2-mile oval at Michigan.And it wasnt from the sake of trying,finishing second in four of the last five Cup races, dating back to the 2016 season finale at Homestead-Miami.Larson won the Auto Club 400 in overtime Sunday to give him a sweep for the NASCAR weekend at Auto Club Speedway in Fontana.

The two-lap overtime finish  was set up when Ricky Stenhouse spun out with only four laps left in the 200-lap race, adding to the number of crashes and cautions.On the final restart, Larson who started on the pole jumped like a bolt to the front and never relinquished the lead in his No.42 Chevy.

“Seems like every time I get to the lead in one of these NASCAR races, cautions always fall,” said Larson. “I’m always having to fight people off on restarts. A lot of times I’ve gotten beat. Today we did a good enough job to hold the lead. Stayed focused and stayed calm and had a good result.”

Truex, led four times for 73 laps and posted finishes of second and first in the opening two segments. It was a career-best finish for Truex at Auto Club Speedway in 17 starts. His previous best finish at Fontana was sixth.Truex’s segment finishes earned him 19 extra points, including one playoff point for the second segment win. He ranks fourth in driver points, and his eight bonus playoff points are the most after the first five races of the season.

“We were fast, we just don’t complete the races that well so we have to go to work and get a little bit better and figure out how we ran all day,”said Jones.

Ford finished with a strong effort aswell to their credit,having Brad Keselowski,Clint Browyer and Joey Logano finishing in amongst the top 5.Dale Earnhardt Jr. finished 16th in his landmark 600th NASCAR start, becoming just the 25th driver to hit the mark. He had to start from the back due to a tire change, and never challenged after that.

The next Cup race on the schedule will be next Sunday at Martinsville Speedway.