On Sunday, all the right circumstances finally fell into place at Michigan International Speedway, with Larson earning his long-awaited first career Sprint Cup win.Larson lost the lead to eventual second place finisher Chase Elliott when both drivers made their final pit stops under green on lap 156 of 200. Elliott beat Larson out of the pits by a half car length and began to pull away. But a caution on lap 187 because of Michael Annett’s blown right front tire gave Larson the chance he needed. With a hard push from third-place finisher Brad Keselowski, Larson took the lead on the final restart on lap 192, as Elliott spun his tires and lost momentum in the outside lane.

Larson crossed the finish line with a 1.478-second advantage over Elliott, who passed Keselowski for the second spot on lap 193. Still seeking his first victory in his rookie season, Elliott had an opportunity to win at Michigan in June but likewise fell victim to a late restart.

With all the anticipation Larson received before taking over the 42 Chip Ganassi Racing ride in 2014, it ironically took 99 races for the 24-year-old driver to break through.With the victory, Larson earned a spot in the Chase for the NASCAR Sprint Cup for the first time in his career, moving winless Ryan Newman 15 points out of the last Chase-eligible position with two races left in the regular season.

“This feels different, because it’s taken me a lot longer than it took me in any of the other stuff to get a win,” Larson said. “Took me a couple months to win my first Sprint Car race, four days after my 15th birthday. Took me a few months to win when I got into USAC. Took me a few years to win an Outlaw race.

“This, after the way my rookie season started, coming close a few times, not getting it done, you can visualize the win that early in your career. It’s going to happen. It’s going to happen. But it just never happened. This one’s different just ’cause of how long we had to wait and how much harder I’ve had to work for it. Like I said, it’s special because all the hard work’s paid off.”

Larson was just 19 when Chip Ganassi recruited the open-wheel standout and launched his transition to stock cars.

Tony Stewart clinched a position in the top 30 in the standings and therefore a berth in the Chase with his 21st-place finish. … Pocono winner Chris Buescher lost a cylinder at the outset, finished 35th, and held onto a seven-point lead over David Ragan for the 30th spot in the standings. Buescher must remain in the top 30 after the next two races to parlay his Pocono victory into a Chase berth. 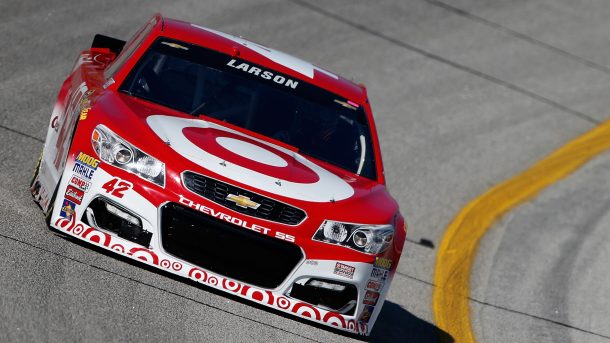