A late collapse by Surrey following a century opening partnership saw honours even in the London clash as today was another day that was disrupted by rain with 7 games starting today with the Hampshire and Leicestershire on Day 2.

Derbyshire made two changes from their heavy defeat at Essex as Ben Aitchison and Samuel Conners come in while Durham made one change from their home win against Worcestershire with Australian opener Cameron Bancroft coming in for Will Young as the latter joined up with the New Zealand squad ahead of their 2-test series against England.

Durham won the toss and elected to field. Derbyshire’s openers Billy Godleman and Brooke Guest would see off the visitors’ bowling attack for the day before bad light and rain would see the day’s play end before half 3.

Warwickshire won the toss and elected to bat. Will Rhodes and Sibley would get the visitors to 22 before the former would be caught by Nick Browne off Peter Siddle’s bowling before Rob Yates was bowled in Siddle’s next over for 0. Pieter Malan would be next out as he was caught by Essex captain Tom Westley off the bowling of Jamie Porter with the score on 37 before Sam Hain became Siddle’s third victim of the day as he was LBW to the Australian for 10.

Sibley would be next out for 43 as he was caught by Simon Harmer off Sam Cook’s bowling before a 56-run partnership from Michael Burgess (35) and Tim Bresnan (47 not out) was ended by Siddle bowling the former with Olly Stone, like Sibley earlier, was caught by Harmer off Cook.

Nottinghamshire were unchanged from their innings home win against Essex a fortnight ago while Worcestershire made two changes from their defeat at Durham with Alzarri Joseph and Dillon Pennington coming in.

Worcestershire won the toss and elected to field. Ben Slater and Hasseb Hameed got the score to 38 before the former was dismissed for 15, caught behind off the bowling off Pennington. Hameed would also be caught behind off the bowling of Joseph for 24 before Joe Clarke was dismissed for nought of his second ball with Ben Cox taking his third catch of the innings off Pennington with the final ball of the day’s play.

Gloucestershire made one change win at Middlesex a fortnight ago with Miles Hammond coming in while Somerset made three changes from their home draw against Surrey last with Steven Davies, Craig Overton and Jack Leach into the side.

The hosts won the toss and decided to field which was almost vincidated straight away as Tom Lammonby was ran out in the second over of the day by Ian Cockbain with Eddie Byrom and captain Tom Abell scoring 22 and 19 respectively in a day that saw just over 20 overs bowled.

Resuming on 53/1, Ian Holland and Tom Alsop would move the score onto 101 before the latter gave Colin Ackermann his second catch of the innings, this time off the bowling of Alex Evans for 25 before Sam Northeast followed the next over as he was bowled by Chris Wright for 2. Holland would be out for 82, LBW to Barnes, with James Vince (32) and Liam Dawson (19) both falling the same way to the same bowler while Lewis McManus would also be LBW, this time to Evans.

Surrey from two changes from their draw at Somerset last weekend with Reece Topley and Amar Virdi come in while Middlesex made one change from their home defeat against Hampshire as Tom Helm replaced James Harris in their bowling attack.

Middlesex won the toss and elected to field. Openers Rory Burns (64) and Mark Stoneman (63) put on 130 for the opening partnership before Stoneman was caught behind off the bowling of Josh Cullen with Burns dismissed in the following over LBW to Ethan Bamber. Martin Andersson would dismiss Ollie Pope and Ben Foakes, both for ducks, in the same over before Jamie Smith (0) and Jordan Clark (1) would also get out as Surrey lost 6 wickets for just 7 runs.

READ:  Parkinson Takes 4 Wickets As Leicestershire Win By An Innings

Kent made one change from their draw at Sussex with captain Sam Billings coming in while Glamorgan named the same team from their home draw against Yorkshire last week.

Glamorgan won the toss and elected to field. Openers Ollie Robinson and Jordan Cox would get to 60 before the former was dismissed with England batsman Zak Crawley following him a couple of overs later without scoring, both players caught by David Lloyd off the bowling of Timm van der Gugten.

Northamptonshire made one change from their innings victory over Sussex a fortnight ago with former Lancashire spinner Simon Kerrigan came in while Lancashire made two changes from their home draw against Glamorgan with Steven Croft and Tom Bailey coming into the team.

The hosts won the toss and elected to field with Lancashire openers Keaton Jennings (23) and Alex Davies (34) seeing through the day’s limited action. 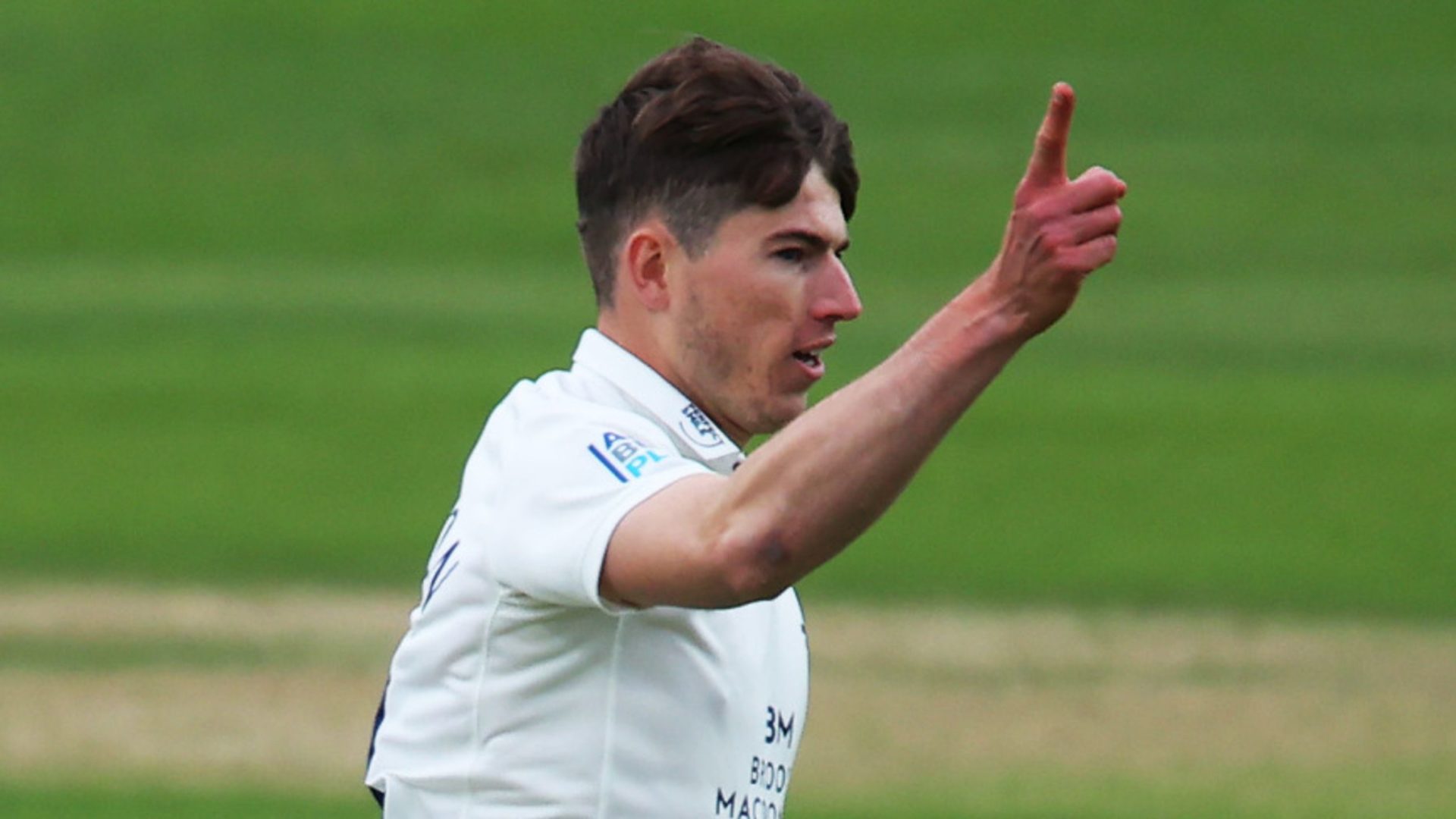