The hosts were unbeaten in nine meetings with the Hammers, winning five of those contests too, this since a 1-0 reverse some twenty years ago, and the most recent Premier League meeting between the sides came almost eighteen years ago when Leeds netted a 1-0 victory.

This game would be West Ham’s 50th away league trip to Leeds, although they had won just six of their previous visits to Elland Road, but the hosts were currently on a four-match winless run at home this campaign and had lost three of their past five fixtures, conceding at least three goals in each defeat, so it was not a particularly good run for the home side.

The Hammers, in contrast, had only lost twice away from home in eight league matches, and victory in this one would see them reach the twenty-point mark after twelve Premier League games for only the second time in their history, and in doing so would see them go up to fifth spot in the table ahead of the weekend matchups.

Leeds knew a win would take them level with their opponents, Everton, and Wolves on seventeen points, and into the top half of the table too for a day or two at least, they sat eight points above the drop zone in fourteenth prior to kick-off and knew a defeat here and wins for the ones below over the weekend could see them pulled closer to that danger zone.  So which side would begin their weekend on a positive note?

Well, Leeds should have started this one in perfect fashion when they were awarded a second-minute penalty after Lukasz Fabianski brought down Patrick Bamford after a lovely ball from Liam Cooper, but the penalty was a shocker from Mateusz Klich and the spot-kick was missed.

But wait a second, VAR wanted to get involved just two minutes into Week 12 didn’t it, and they ordered that the penalty be retaken after Fabianski was adjudged to be off his line when the penalty was taken, so a reprieve for the hosts and Klich made amends by netting his retaken spot-kick, and so four minutes after the original penalty was awarded, Leeds finally netted it, dear oh dear, VAR eh, what can you say.

David Moyes was furious with the decision and certainly let the fourth official know, but could his side recover from this early setback?

Well, Sebastian Haller probably should have levelled soon after but saw his header strike a Leeds player and lose all its power, and Haller again had another chance soon after that with a shot on the turn, but it was alarming how easily they were carving open the home sides backline.

Leeds managed to weather that early Hammers storm and lashed an effort wide through Rodrigo Moreno, but the opening twenty minutes had been action-packed, to say the least!!!

Just past the midway point of the first half though, West Ham did level, and it was a moment Leeds keeper Illan Meslier will not want to see again, as he somehow allowed a header from Tomas Soucek to creep past him, and although the hosts did their best to clear the ball, it had crossed the line and The Hammers had responded well to that early setback.

It had been a terrific first period in a game dripping in drama and very much in the balance as it reached half time with the sides locked together, and the 100mph tempo of the game continued early in the second period although it was West Ham who was doing most of the pressing as Leeds were struggling to get out of their own half early in the second half.  Haller seemed to be seeing a lot of the chances, but he had left his shooting boots at home thus far.

Both teams were evenly matched though, and the game remained in the balance as it reached the hour mark, but West Ham began to crank up the pressure as the game approached it’s final twenty minutes, seeing Said Benrahma fizz an effort just wide, but Leeds then saw a couple of efforts at goal fail to find the net in a matter of seconds, it had been that sort of game.

So, would there be late drama? Pablo Fornals should have put West Ham ahead with fifteen minutes left after a lovely pass from Declan Rice, it what was another lovely move began by Benrahma, and then Leeds were then rescued by keeper Meslier after he kept out Fabian Balbuena’s header two minutes later.

However, with eleven minutes remaining West Ham did find the net when Ogbonna powered an unstoppable header past Meslier, this after a needless foul by Helder Costa, and the visitors had just over ten minutes to see this one out and take the points.

The visitors though wanted to seal the deal and not just see out with what they had, and with three minutes left saw a spectacular effort from Haller turned away brilliantly by Meslier, and then Balbuena headed an effort against the Leeds woodwork as the game entered four minutes of added-on time.

Leeds had a huge chance to make The Hammers pay for those misses two minutes into stoppage time, but Rodrigo could only head straight at Fabianski, and Moyes was prowling the touchline asking his players to be calm, and they duly saw out the remainder of time added on to take a big win in what had been an enthralling game at Elland Road.  Follow that everyone else!!! It had been a cracking start to the weekend…

So, what does that do to the table? Let us have a look… 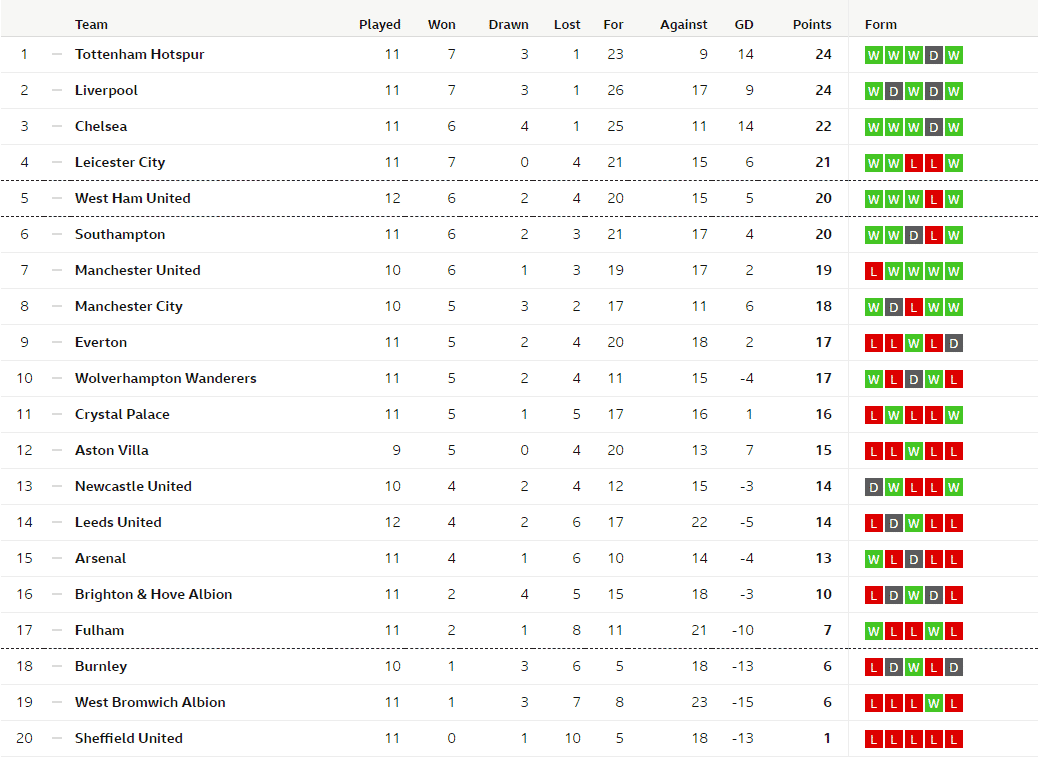 That incredible shift from the Hammers sees them go up to fifth, whilst defeat for Leeds sees them remain 14th in the table.  These are the remaining games this weekend for Week 12…

A Midlands derby at Molineux, a Manchester derby at Old Trafford, and a London derby at Selhurst Park, just some of what you have to look forward to this weekend!!! Stay tuned… 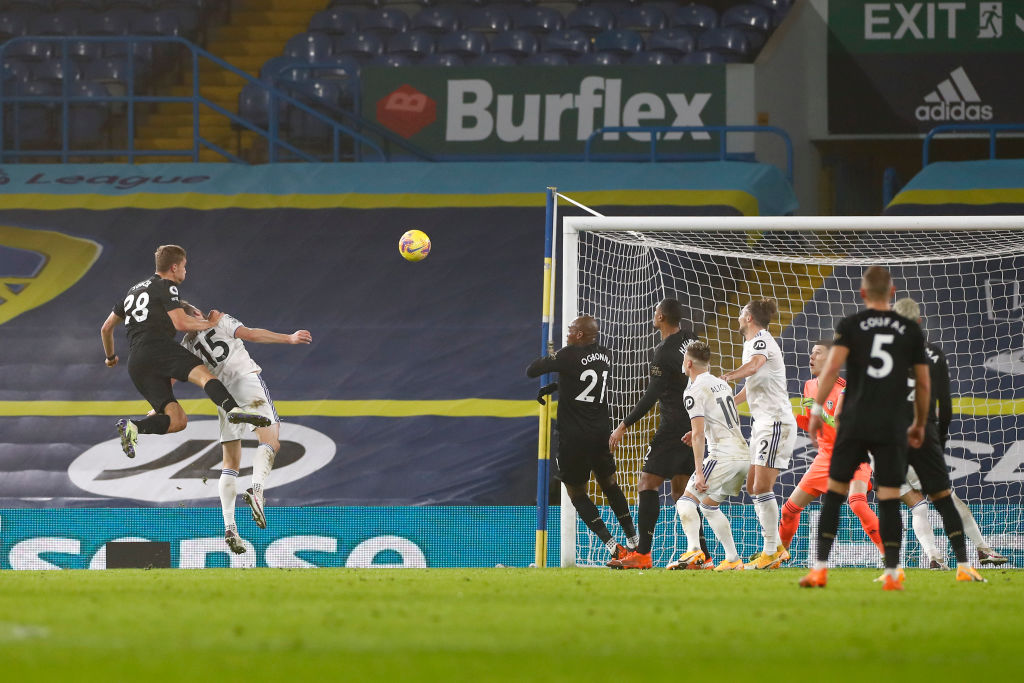