Shortly before kick-off in a sun-dappled Anfield, the Liverpool faithful unveiled a banner that said simply, ‘1995’, a reference to the last time their opponents in the so-called friendly derby last won some silverware. The unveiling was quickly followed by a voluble and jeeringly joyous rendition of ‘Going down going down going down.’

Earlier in the day, Burnley had eeked out a hard-fought 1-0 win over Wolves at Turf Moor to send Everton into the bottom three, putting themselves two points ahead of the Toffees, albeit having played two games more than their fellow strugglers at the foot of the table. As a result, the Liverpool fans were suitably inspired to not only laud their superiority over their neighbours, but also revel in the schadenfreude delight of their parlous position.

Everton were last relegated in the 1950-51 season, and it was clear from the first whistle that none of the current crop of blue-shirted incumbents want to be responsible for a return to the second flight of the football league pyramid.

Against a rampant Liverpool of late the plan was obvious: pack the midfield and defense, spoil, frustrate, and if possible – as in the case of the provocative, theatrical, time-wasting from the first minute by Everton goalkeeper, Jordan Pickford – play the pantomime villain to the hilt.

In a fractious first half, where Anthony Gordon was booked for simulation in trying to convince the referee, Stuart Attwell, to award a penalty; Mane and Allan, who rushed around as if looking for a china shop, squared up, where Jota was continually sniped at by Coleman, Doucoure put himself about with aggressive intent, and the two managers resumed hostilities on the touchline, a football match forgot to break out and there was not a single shot on target from either side.

Whatever was said at half-time in the dressing rooms seemed to work as the players emerged for the second half, and suddenly we had a match. As the action ping-ponged from end to end in a frenetic opening ten minutes, Anthony Gordon found himself in a one-on-one race with Liverpool center-back, Joel Matip in search of a ball over the top from Alex Iwobi. The Everton forward made to shoot but seemed to be bundled over. Much to the consternation of Frank Lampard, who resembled a desperate man trying to sell the shirt off his back on the touchline, no penalty was given.

At the quarter-hour mark of the second half, Naby Keita and Sadio Mane were withdrawn for Luis Diaz and Anfield cult figure, Divock Origi respectively.

It proved to be an inspired double substitution from Jurgen Klopp which led directly to the deadlock being broken.

As Liverpool worked the ball down the right-hand side. Salah picked up the ball, played a delightful one-two with Origi who held off two defenders and returned it to Salah who stood up the ball to the far post where the on-rushing Andrew Robertson powered a header into the bottom corner.

Cue mayhem in the stands and renewed chants of ‘Going down going down.’

Suddenly all the tension went out of Liverpool’s play, and the trademark free-flowing attacking football asserted itself with a vengeance.

A shot from Diaz palmed away for a corner by Pickford, a near-miss by Salah, when he really should have scored a second. Diaz tried his luck again.

Frank Lampard had to do something. No longer could his team sit back and defend en masse. They had to get higher up the field.

A last-ditch intervention from Robertson prevented Alex Iwobi from scoring a tap in after good work from Richarlison and Dele Ali down the left.

But with 10 minutes to go, Klopp pulled another off another show of tactical nous when he withdrew Virgil van Dyke and brought on his captain Jordan Henderson to rally the troops, shore things up in midfield and get the team over the line to victory. Immediate impact duly arrived as Henderson found Salah who fed Thiago and the Spanish midfielder’s snapshot drew a smart save from Pickford.

From the resulting corner, the ball was half-cleared to Henderson who recycled the ball into the area where it was met acrobatically by fellow substitute Luis Diaz and headed into the net by another, Divock Origi, right in front of his adoring fans in the Kop.

Liverpool 2-0 up and five minutes to go.

As the match drifted into injury time Richarlison lashed out at Henderson and was lucky to only get a yellow card, frustration boiling over as Everton bowed to the inevitable.

The final act though was left to home goalkeeper Allison who delighted the Anfield faithful by theatrically falling on the ball whilst under no pressure in a sly imitation of his opposite number.

As the Brazilian sent the ball down the other end, there was just enough time for Stuart Attwell to blow for full time.

Liverpool were home and dry, goal difference improved, and back to within one point of Manchester City in the race for the Premier League title. 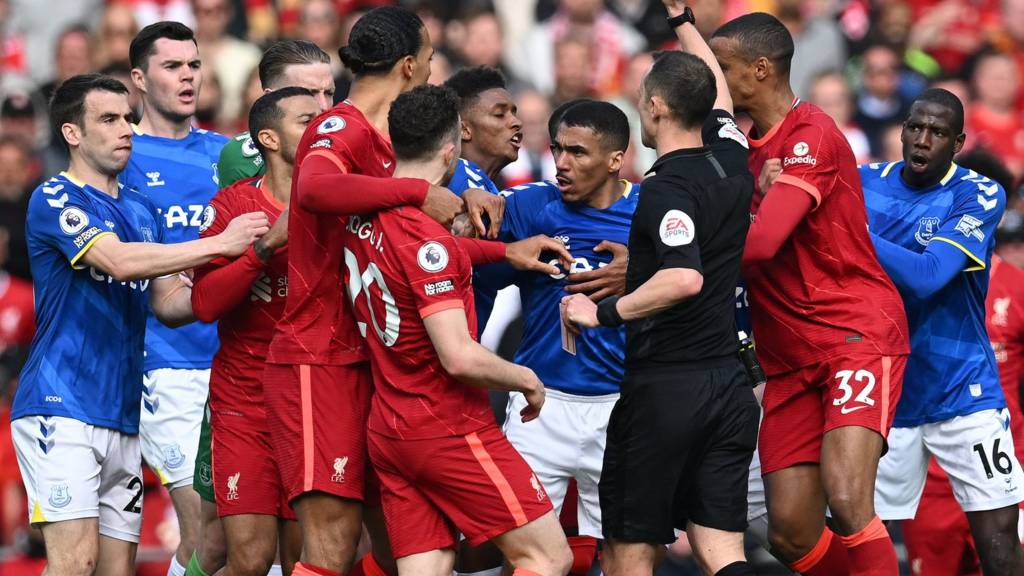