There were just two games this midweek in the Premier League, but both had ramifications at both ends of the table, there was a huge game down at the bottom at Turf Moor, and an important one at the top over in the North West at Goodison Park…

This was quite an important game for both, but maybe more so for the visitors, as at kick off Fulham sat seven points from safety and eight points behind their opponents, so a win would reduce that gap and really get The Cottagers believing survival was possible. Burnley on the other hand knew if they could win this one, they could increase the gap to the bottom three to a huge eleven points and give themselves even more breathing space. And with both sides taking on West Brom and Sheffield United at the weekend respectively, a win in both of those games could make a huge difference down at the foot of the table, no doubt Newcastle were taking much notice of this one this evening and at the weekend.

It was Burnley who had the only two real chances of the first half, seeing Kevin Long send a point-blank range header over the bar after twenty-five minutes, and then right at the end of the half James Tarkowski send a brilliant ball across goal which just missed Ashley Barnes before Alphonse Areola got a touch to it which took it beyond James Rodriguez at the far post, but apart from these two moments, not a lot else happened in a half which saw Fulham do most of the defending and offer literally nothing going forward so that needed to change if they were to get the three points in this one.

Burnley looked the most likely to find a breakthrough if there was going to be one, but three minutes into the second period Fulham grabbed the lead when a corner swung in by Ademola Lookman was flicked on by Joachim Anderson towards Ola Aina who chested the ball towards goal and Robbie Brady made a mess of trying to clear the ball off the line and the Cottagers had a very important goal, but four minutes later Burnley had an instant repost as Rodriquez got down the right and crossed for Barnes to take a touch and fire home, more had happened in the opening seven minutes of the second half then the whole of the opening half, and we were back on level terms again.

A point certainly suited the hosts more, Fulham really needed all three, but with neither side finding a crucial second, it meant both had to settle for a point, meaning The Cottagers do make it six unbeaten away from home, but five of those have been draws, and draws probably won’t keep them up. No doubt Newcastle would have been happy with this result too, they are six points ahead of Fulham now.

Everton badly needed a response to their poor performance against Fulham last time out, but they could not have chosen a worse side to try and do that against Man City who was on a sixteen-match winning run in all competitions and knew another three points here would take them ten points clear at the top with just fourteen games to go. The Toffees knew if they could net a superb win over the visitors then it would take them level with sixth-placed Liverpool and just two points off the top four with a game in hand too, and give others hope of catching City at the top too, so lots at stake in this one.

Man City dominated the ball in the opening half-hour, but their only real chance saw Gabriel Jesus fire over, but on 32 minutes City found the breakthrough when a ball into the box by Riyad Mahrez fell loose inside the box to Phil Foden whose shot deflected off Seamus Coleman, wrong-footing Jordan Pickford, and finding its way into the net, and the league leaders were up and running once again. But Everton hit back with a rare attack eight minutes before half time as a cross by Coleman found Lucas Digne whose driven shot back across goal thumped off the far post, hit Richarlison who was a yard out and went back into the net, and it was the first goal City had conceded from open play in 45 days, it doesn’t happen that much, but the Toffees were now level going into the half time break, could they go on and halt the City juggernaut, or would City go on and get another three points which many expected before the game?

Man City went close through Bernando Silva, Jesus and Rodri early in the second half, but in the 63rd minute they did retake the lead with a gem, as Silva laid a ball into the path of Mahrez who sent a wonderful first-time effort in off the post, and City had the lead they deserved, and it meant Everton needed a response once again and they brought on James Rodriquez and Josh King to try and bolster their attacking options.

Man City though is just too good right now, and they sealed the deal with just under fifteen minutes remaining as Mahrez played a pass to Jesus who laid the first-time ball off to Silva, he took a couple of touches before firing an effort which was too hot for Pickford to keep out, Pickford maybe should have done better with the effort, but he didn’t, and City is just unstoppable right now. Kevin De Bruyne, remember him? Well, he came on with eleven minutes to go, and with Sergio Aguero on his way back to and on the bench, it must be a worry for everyone else in the division seeing those two back in the squad. Everton stay seventh and have Liverpool to come at the weekend, it’s five games without a win at home now, although tonight was never ever going to be easy was it, so they will now put all their efforts and attention towards a big Merseyside derby at the weekend. 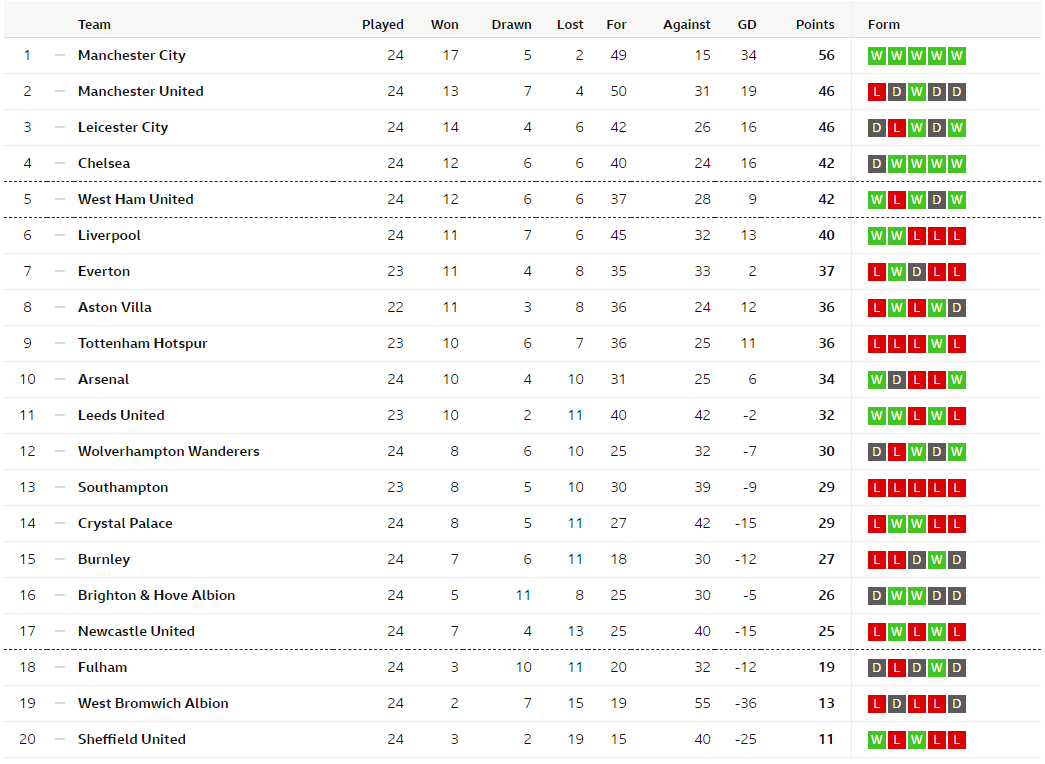 Can anyone stop City now? SEVENTEEN wins on the bounce, and TWELVE in the league, extraordinary stuff from the league leaders. And with De Bruyne and Aguero back in the squad it is hard to see how they would throw this away now, ten points clear and in top form, it does seem the others are playing for second place and the top four. Down at the bottom and Fulham, West Brom and Sheffield United remain deep in trouble, Fulham has the best chance of survival but need wins and not draws, as for the bottom two, it’s looking unlikely now.

Another round of Premier League fixtures to come this weekend, here they are…

Four Derbies at the weekend, The Merseyside derby at Anfield as Everton look to try and go level with their rivals in the division, West Ham v Spurs at The London Stadium, The Hammers could go into the top four with a positive result, Villa v Leicester at Villa Park and then Brighton v Palace on Monday night, plenty of decent scraps to come!!! Oh, and Fulham could end the weekend just three points behind Newcastle if they beat The Blades and Toon lose at Old Trafford, could be squeaky bum time down there!!! An exciting weekend awaits… 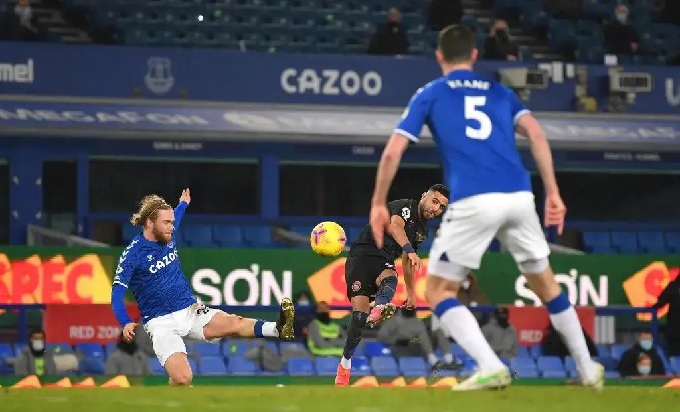