This game would go a long way to deciding how these two sides campaigns would pan out, The Baggies knew a win would take them just six points from safety, whilst for the Magpies, they could pull six points clear of the drop zone if they could grab a win here, although as it turned out neither side could find a goal in this one in what wasn’t a classic encounter at The Hawthorns, The Magpies had the better openings in a game that lacked any attacking fluency, West Brom keeper Sam Johnstone was alert to deny both Jonjo Shelvey and Joe Willock either side of the break.

The Baggies best chance saw Mbaye Diagne send a header at goal which was tipped behind by Martin Dubravka, whilst Matt Phillips fired over when well placed for the hosts early on in the second period, but with The Baggies having only netted twice in their last five games and the visitors have failed to score in seven of their past nine away games, it wasn’t a surprise that this one ended goalless, and the point does more for Newcastle than West Brom though so the visitors would have been happier with this result.

What has happened to Liverpool then? Last season’s champions season goes from one crisis to another it seems, and their sixth straight home defeat to relegation-threatened Fulham was the latest low point in a campaign that threatens no European football at all for the Reds next season after this defeat saw them slip down to eighth. Jurgen Klopp made seven changes for this contest, including leaving out players like Sadio Mane, Roberto Firmino, Fabinho and Trent Alexander-Arnold, which was a surprise to many, and would have given Fulham a boost that was for sure.

Fulham have been playing well recently too, and they were much the better side in the first period and made that count just before the break when Mario Lemina dispossessed Mo Salah just inside the Liverpool box before firing a lovely strike across Alisson and into the far corner, and although the hosts applied more pressure onto the visitor’s backline in the second period and brought on some of their more senior players late on, it wasn’t enough to save them as they slipped to defeat, this was a huge win for Fulham and the emotion at the final whistle suggested that they really do believe they can stay up now and the sides above them, Burnley, Newcastle and Brighton now know they are in a relegation battle now.

Many, including myself, were left scratching our heads and wondering how this was the same Manchester United side who had been awful in their 0-0 draw at Palace in midweek, as this United side were hungry, energetic and looking every much the side that had climbed to the top of the division not so long ago.  They certainly sent their City rivals, at least on this day, packing with their tails between their legs after a superb performance which ended the Blue half of Manchester’s long winning record after netting early in each half, and extended their own away unbeaten record to an astonishing 22 games, which includes 14 wins.

United was handed the perfect start to, winning a penalty after just 34 seconds into the contest after Gabriel Jesus’s rather silly challenge on Anthony Martial inside the box, and Bruno Fernandes stepped up and almost failed to take the chance as Ederson got a big hand to his spot-kick, but the keeper could not keep it out and could only palm it into the side of the goal, and then after City had gone so close to levelling early in the second period when Rodri struck the bar, United went up the other end and struck a second as full-back Luke Shaw exchanged passes with Marcus Rashford and swept a lovely effort beyond Ederson, and it saw United onto a win over their rivals and retake the second spot from Leicester as a result.  Despite this though you still expect City to go on and take the title.

Are Spurs hitting form at the right time? This was their third straight Premier League win, and they had netted eight goals at home in their last two after they saw off Palace at The Tottenham Hotspur Stadium. Gareth Bale made his third straight start in this one too and is starting to look every bit the player he was before he left for Madrid several years ago, and with him, Harry Kane and Son Heung-min leading the line, it’s a pretty decent attacking prong which will cause many teams issues if on-form.

And in Lucas Moura, they have an attacking player whose work rate is first class, and it was he who forced the error which led to Spurs taking the lead after twenty-five minutes, dispossessing Luka Milivojevic before Kane then burst into the box and squared for Bale to tap home at the far post, but despite dominating the half Palace levelled with their first attempt on goal right on half time when Milivojevic pinpoint cross found Christian Benteke who sent a bullet header beyond Hugo Lloris and the teams went into the break all square.

How would Spurs respond to that setback? Well Palace were also buoyed by the return of Wilfrid Zaha who came off the bench for a second-half showing, however, Spurs were soon in total control after a quickfire double, firstly seeing Kane head a lovely cross from Sergio Reguilon headed back across goal for Bale to send a header past Vincente Guaita just four minutes after the break, and then Kane produced a moment of magic three minutes after that after he curled home an absolute beauty from outside the box to hand Spurs a two-goal cushion.

Zaha did show a moment of brilliance when he sent a shot from the edge of the box against the post, but Spurs ended any doubt about the result with just under fifteen minutes remaining after Son’s cut-back found Kane who dispatched his second of the game and 24th of the season, it had been some game for Kane, two goals and two assists, both for Bale, and they had got themselves into the top six as a result and right in the fight for European football next season. Palace will want to forget this one in a hurry but are still eight points above the drop zone so still some breathing space, but still need two wins to get to that magical forty-point mark.

It’s now eleven games unbeaten for Thomas Tuchel as Chelsea boss, and this win over The Toffees at Stamford Bridge meant they ended Round 28 in fourth spot and just two points behind third-placed Leicester, and one change he did make to his starting eleven saw Kai Havertz replace Mason Mount in what raised a few eyebrows, but Havertz was to play a starring role in this Chelsea win, as just past the half-hour mark he turned Marcus Alonso’s cross from the left towards goal and then saw his effort go into the opposite corner of Everton defender Ben Godfrey, and then he won the penalty after being wiped out by Jordan Pickford that Jorginho converted twenty minutes into the second half to help see Chelsea to what was a fairly comfortable win over one of their European rivals.

Havertz was unlikely not to grab a goal himself, he was adjudged to have handled before firing home inside the box when the scoreline was 1-0, and The Blues probably should have won by more but saw Pickford make several stops to deny them, but the hosts did pick up what could be a huge three points in the race for the top four. Everton’s best and only real opening saw Richarlison slice wide when in a great position, but the visitors were outplayed here and ended the weekend sixth and four points behind Chelsea.

The Hammers just keep marching on, don’t they? After their narrow loss at Manchester City last weekend, they got back to winning ways thanks to first-half goals from Jess Lingard and Craig Dawson saw the hosts in fifth and just two points off Chelsea in fourth.  It could have been a different story though had Leeds had a bit of fortune in the opening ten minutes, firstly seeing a Tyler Roberts goal ruled out for offside, which in reflection seemed a bit harsh, and then Patrick Bamford swept home soon after, but the ball had gone out of play just before Raphinha had crossed the ball in.

It had been a blistering opening spell by the visitors, but their defensive frailties came to the fore once again as they conceded a needless penalty when Luke Ayling tripped Lingard inside the box, and although the loanee saw his penalty saved by Illan Meslier, the ball came back to Lingard who swept home the rebound, and then just before the half-hour mark poor marking from an Aaron Cresswell corner saw Dawson head home from close range, and the Hammers were two goals to the good, and it could have been even better for the hosts but Dawson almost headed in a second corner just before the break but saw the ball thump off the far post.

Pablo Fornals then struck the Leeds woodwork again after the break with a wonderful long-range effort, but Leeds certainly caused problems and missed several decent openings in their quest to try and find a way back into the contest, but it just wasn’t the visitors evening in front of goal and coupled with West Ham defending solidly and digging in, it meant the Hammers would run out victors and pick up the points in what was an entertaining encounter at The London Stadium. 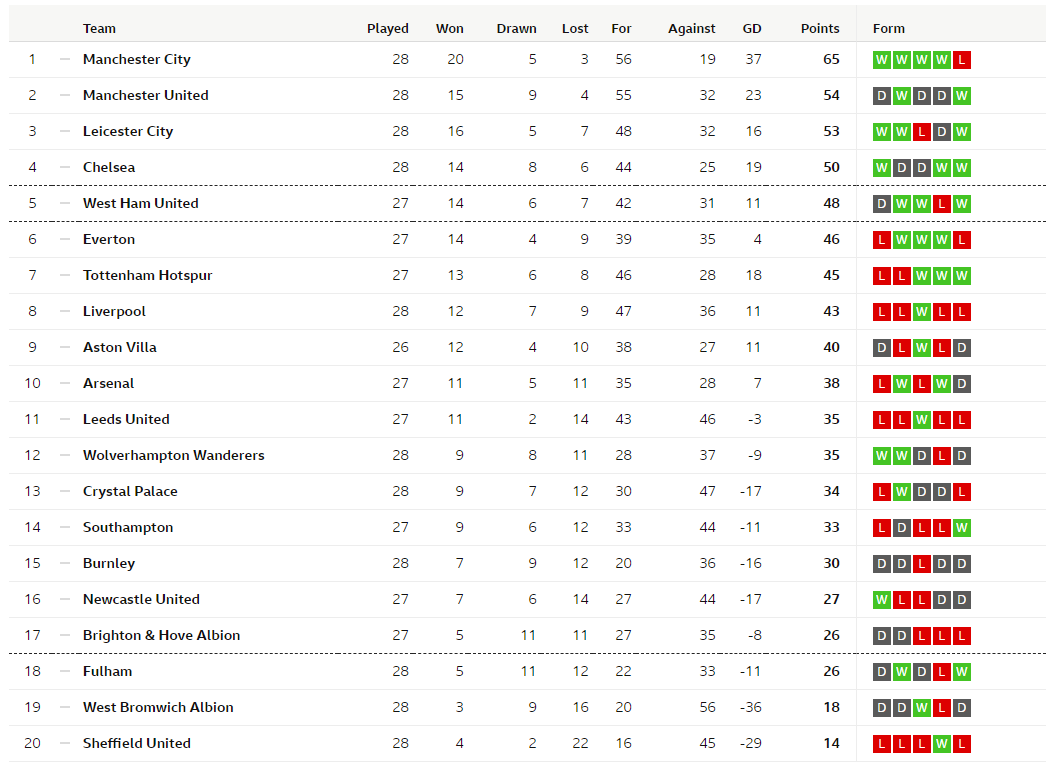 United’s brilliant win at City does reduce the gap at the top, but with City still holding an eleven point gap with ten games to go, it still looks likely that the title is theirs, so the rest seem to be playing for runners up and the top four. Everton and Spurs are within touching distance of the top four and have a game in hand, whilst Liverpool and Villa do still have an outside chance too, and Villa’s two games in hand are against Everton and Spurs, so very big games indeed. Down at the bottom and Fulham are now level with Brighton, and 15th placed Burnley are only four points above the bottom three, so that could be an interesting battle to see who stays up and who goes down, although Newcastle and Brighton do have a game in hand, whilst West Brom and Sheffield United still need a lot to go for them if they are to make a dramatic and frankly miracle escape.

Just one game this week, and it comes on Wednesday night as leaders Manchester City host Southampton at The Etihad, can City bounce back from that defeat against Manchester United and go fourteen points clear at the top, or can The Saints back up that win at Sheffield United with a stunning win in Manchester and ease their relegation fears, we shall find out soon enough. 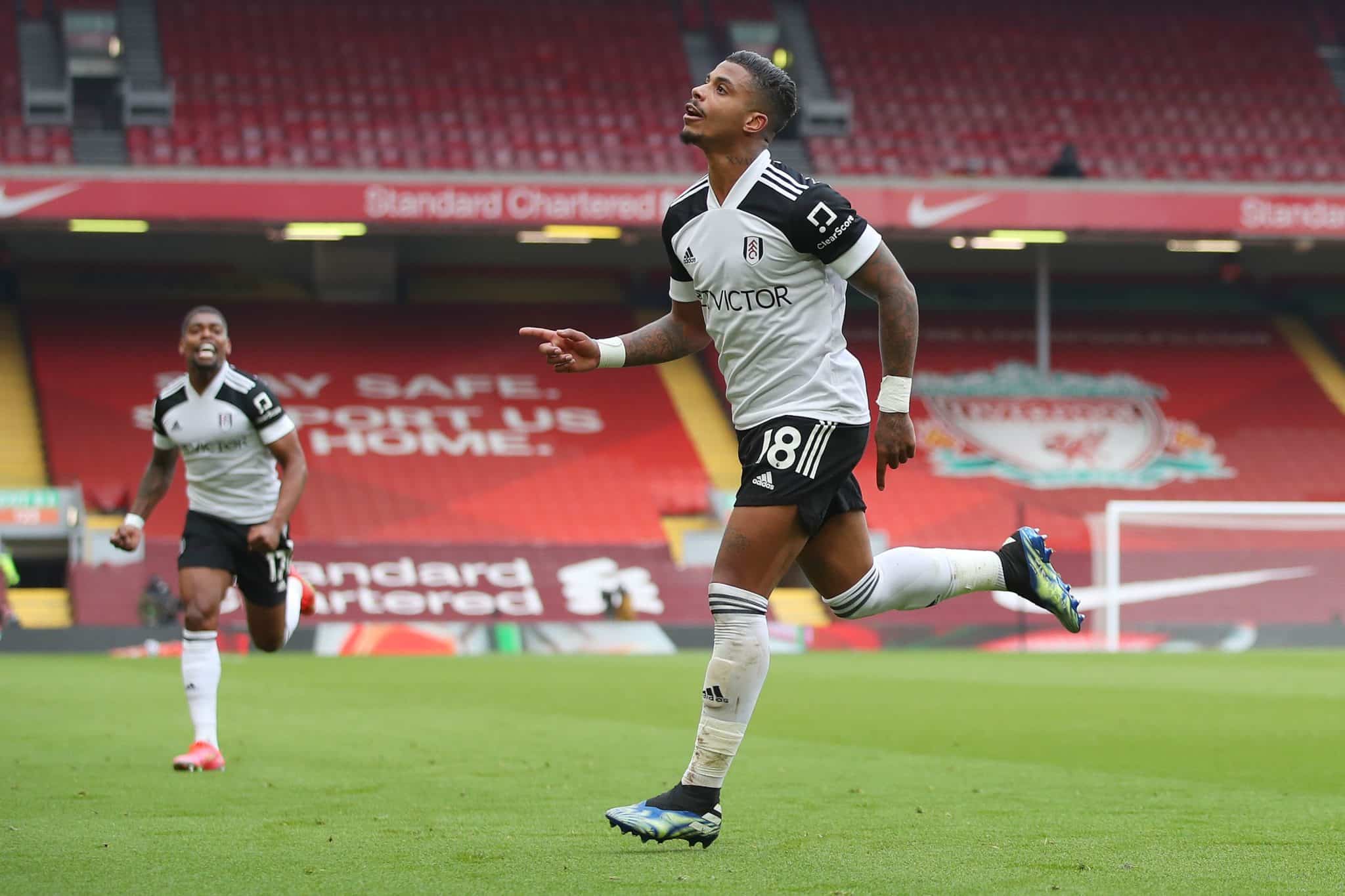