Yesterday, the world of mixed martial arts was abuzz after it was announced that Dustin Poirier and Nate Diaz had agreed to fight at a pay-per-view to be held sometime in February. Today, those hopes were dashed when it was announced that the plans had suddenly fallen through. As always, when a major fight is called off there are conflicting stories as to exactly what happened. What we know for now is that these two lightweight warriors won’t be climbing into the octagon together anytime soon. Let’s take a closer look at what the unravelling of this sure-to-be massive pay-per-view fight means for each individual fighter as well as the UFC as a whole.

While the UFC’s popularity should rightly be contributed to the excitement the athletes generate while performing, the organization’s strategy in putting together fights has done more than its fair share to aide the sport’s growth. The organization has been so adept at pitting high profile fighters against one another, that it has often been criticized for looking past more deserving performers who have not generated the following of their peers. One prime example of this came in May of 2021. Michael Chandler, who’d become popular as the lightweight champion of rival organization, Bellator, was given a title shot in just his second event with the organization. While Chandler would come out on the losing end of UFC 262’s main event, detractors were as loud as ever. They felt that Charles Oliveira should have been facing a fighter who’d been in the UFC for years, instead of a “Johnny come lately” with a large following.

In spite of this continuing controversy UFC’s CEO, Dana White, has decided to stick to his proven formula. Placing Dustin Poirier in the octagon against Nate Diaz would mean getting two of the most popular fighters in the organization in the same place at the same time. Diaz has become known for publicly inviting Dwayne Johnson to fight him, throwing wild house parties, and reminding everyone of the guy who spent more time joking around in study hall than actually studying. Poirier, on the other hand, is popular for avenging his loss to Conor McGregor, being a former interim lightweight champion, and doing a great deal of charity work in the State of Louisiana. Although there wouldn’t be a belt on the line, a Poirier versus Diaz main event would be more than enough to carry a pay-per-view and sellout a venue.

Dustin Poirier is four years younger than Nate Diaz. He was also a much more active fighter in 2021 than his would-be opponent. Diaz’s only appearance inside the octagon during the last calendar year came about in June at UFC 263. The result of that fight was a unanimous decision loss to Leon Edwards. Poirier, on the other hand, won two fights and ended the year with a disappointing loss to reigning champion Charles Oliveira. According to the organization’s website, Poirier is the eighth best pound-for-pound fighter in the world. Diaz, on the other hand, has seen his best days and has one fight left on his UFC contract. Diaz is as tough as they come, there is no questioning that, but it is hard to imagine a scenario where he defeats Poirier at this point in their careers.

Unfortunately for Poirier, it will be a while before he gets another shot at the title. The lightweight division is the most talented division in the entire sport and Charles Oliveira has a slew of worthy challengers who deserve a shot at the belt. However, he still had a great 2021 and stands to make a lot of money fighting in 2022. It is not unthinkable that he goes undefeated against three quality opponents in front of sold out crowds at pay-per-view events this year. If he does that, he could very well find himself in line for another title shot in January or February of 2023.

Nate Diaz has become a cultural icon. He is one of the few fighters who demands a five-round fight even when his is not the main event of the evening. His next fight in the organization is the last of his contract and may very well be the last fight of his career. While it will probably be a five-round fight, billed as a co-main event, the opponent will be a hand-picked sheep, sent to slaughter, as the last meal of an immensely popular former champion.

Not surprisingly Nate and his older brother, Nick, are outspoken proponents of legalized marijuana. They endorse a brand of rolling papers that are wildly popular in the Los Angeles area, and they own a company called Game Up Nutrition, which offers a variety of marijuana induced products. In addition to that, the brothers own a Jiu-jitsu gym in greater Los Angeles where their goal is to train the next mixed martial arts star. Diaz has used the wealth gained from fighting to create business ventures for himself that will ensure he can retire whenever he feels like it. That is exactly what a fighter should do; he deserves a round of applause for that.

Dustin Poirier is only 32-years-old and is many years away from retirement. However, his impact outside the ring has already been felt by the entire State of Louisiana. He has held many charitable giveaways, especially for those who have been impacted by the organization’s hurricanes. The work he and his wife, Jolie, have done is admirable; they have become pillars of the community in every sense of the word.

In all honesty, I’m a fan of both Dustin Poirier and Nate Diaz. However, I feel that their careers are headed in two different directions and watching them fight now would be anticlimactic. Diaz is only 36-years-old, but he has not taken great care of himself. By his own admission, he abused drugs for years. That means his body is not in the condition of other elite 36-year-old athletes. Poirier is still relevant in the lightweight division and it is not unthinkable that he will get another title shot before his career is over. In my opinion, Diaz should choose a mediocre fighter for his next opponent; he’s had a great career and he deserves to leave with a win. Poirier should only face other fighters who can continue to build his resume; beating Diaz at this point in his career does nothing to boost his rankings. These two are individually great but ultimately, it’s probably best that they don’t face each other. 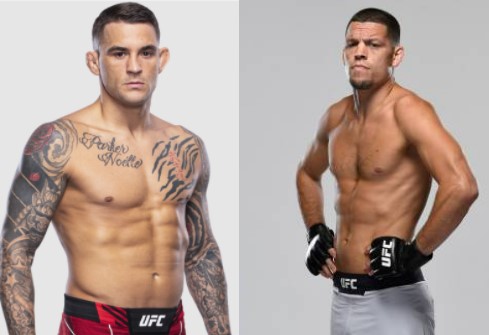