Rawalpindi is done and dusted, a magnificent motivational memento for futuristic, forward-thinking England when the going gets tough on the next featherbed. The follow-up might be tricky if minds are as foggy as Multan in the morning. The football World Cup is on but the cricket filler in the morning is a brilliant aperitif. A penalty shootout could not match the sustained tension of that last fifth day hour.

Brendon McCullum’s team now visit the ancient city of Multan in the Punjab, an altogether different hub of culture and architecture. Ben Stokes, global warrior and disruptor of Test match cricket, is now blazing a path never trodden before. Wherever England go, the expectancy is the unexpected. Traditional tactics are there to be trashed. Or at least challenged.

Dare or die wondering is the tone. Kevin Pietersen, a member of the squad that arrived here in 2005 as Ashes winners, used to have a saying: “I’m not scared of getting out. I don’t fear failure”. The shackles of trepidation are now off the whole of the team. It’s quite something to see Ben Duckett, Zak Crawley and Ollie Pope – none of whom can be totally secure with current Test match numbers– really hit their straps without worrying about the consequences. Poor (and injured) Liam Livingstone must be jealous.

Remember when Michael Vaughan’s team smashed 400 in a day against the Australians at Edgbaston? This England have taken that concept a full one hundred runs further. Stokes also has the vindication of winning seven out of the eight Tests he has captained so far. This might not last. It’s fun though. Much more fun.

Pakistan will be hoping the coin toss comes down on their side because they can drive the game better should their opponents still be feeling the effects, however positive, of that victory charge. Mighty horse Mark Wood is fit and raring to go on what promises to be another flat pitch albeit one that could be conducive to spin. Stokes, the new and improved Ollie Robinson and Jimmy Anderson were tireless last week but the 150mph motorised brings that key factor of chaos.

The Multan Stadium looks set for a compressed game with daylight fading as per Pindi, but also a significant element of morning smog. These are challenges that Spontaneous Stokes Theory will no doubt relish. The captain was even threatening to declare without batting at all on a pitch near you. The PR pre-match banter is going down better than the Netflix trailers for the Sussexes.

Bazball is on a roll

Emboldened by the streak of results against New Zealand, India, South Africa and Pakistan, a draw is now almost an obscenity, something that is simply not in the thinking scope of Team Bazball. What would the MCC members be thinking behind their broadsheets, having seen West Indies take an hour to bowl 12 overs in the 1980s? Or Sir Geoffrey Boycott negotiate yet another maiden over with relish? It just isn’t cricket to see six 4s in an over as Harry Brook produced last week.

When England last ventured to Multan during that painful 2-0 series defeat, assistant coach Matthew Maynard insisted Pietersen must build an innings: “He has got to realise and work out the hardest thing to do is get to 20.” In 2022, England’s skipper said he would prefer Jimmy Anderson to smash 20 off the final over if he was last man standing rather than block. The sea change is coming in waves. 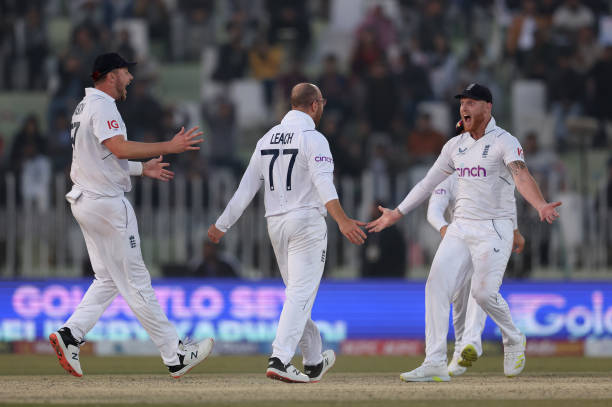