The NFL’s Dave Gettleman calls them “Hog Mollies”, Adam Gase doesn’t consider them an important position. Tom Brady (if it wasn’t part of his self confessed misinformation campaigns) believes they’re the most important part of the Offense.

Interior Offensive Lineman. Singularly the least glamorous and most underpaid – come at me Tight Ends – players in the NFL. Charged with creating daylight for Running Backs and keeping the trench moving forward. They slog, Down after Down to contain some of the biggest and most tenacious athletes on the planet. Throw in full charge Linebacker and Safety Blitzes and you have yourself a brutal Sunday afternoon.

If you have a good game your team’s running back will get 100 yards plus and be in contention for Offensive player of the week. Have a season of good games and your QB will throw 35 TD’s, 4,000 yards and tag an extra $10 million on to his annual income. Meanwhile you just hope the GM’s Cap alchemy doesn’t involve “getting cheaper on the interior”.

That said, if you’re Elite – like any profession – the pay day will come and your QB will ensure a steady pipeline of juicy steak dinners. Joe Thuney represents that mould in 2021 picking up a healthy $80 million 5 year deal to be a Superbowl contender. Luckily for AFC East Defensive Lineman his departure by any measure is a significant loss for the Patriots.

Nearing the end of your AFC East breakdowns, let’s take a look at our smorgasbord of Hog Mollies, bracing for battle in 2021 for the inglorious right to be anonymous: depth charts, Cap hits and Rookie potential scale.

Mitch Morse is the interior “Daddy” of the Bills group. Drafted 49th overall in 2015 by the Chiefs, Morse is a role model Centre who grafts hard, is consistent and effective. He keeps the line in order and Allen free to do his job. Morse played 82% of 2020 snaps, ranked 4th among Centres in penalties and only allowed 1 Sack.

Either side of Morse are Ford and Feliciano. Neither managed to start more than half the season rotating with Douglas and Boettger. Consistency is key particularly when Coaches look at the blend of 5 rather than players in a vacuum.

Forrest Lamp was a highly touted Rookie coming into the league in 2017. Sadly his Rookie year was an achilles right-off, 2019 wasn’t much better. Last year in contrast Lamp took the most snaps of any player in the NFL, 1174. Despite that and the excellent play of his QB, Lamp was moved to Buffalo under the new coaching regime in L.A.

Beane (GM) took a flyer on 7th Round Jack Anderson from Texas Tech in this year’s Draft who has good size and power but – Buffalo Scouts – must have some inside information on his potential and character to warrant this pick. This is an expensive room for Buffalo. With Josh Allen’s contract looming I suspect some reshuffles soon enough.

Miami are neck deep into their Offensive line overhaul. They’re not shy when it comes to aggressively turning over the roster, this Front Ofice is all about ice cold business decisions. After watching the units performance last year the key insight was Robert Hunt.

After a slow start at Tackle, by the end of the season Hunt was brutalising defenders in the run game. Flowers took an injury allowing Solomon Kindley to move over to Left Guard inadvertently revealing the best interior mix.

Flowers was shipped – at some (dead) Cap cost – back to Washington and Miami’s “Brass” openly announced Kindley and Hunt would be the Dolphins Left and Right Guards in 2021. If there was any debate left to be had, that was quashed in the 2nd Round of this year’s Draft when Liam Eichenberg was added to the roster as the presumptive Right Tackle.

Matt Skura came over from Baltimore as the assumed starter at Centre, but Miami fans are wondering exactly where Michael Dieter is in his development also. He has been quietly cross training at Centre for the last 18 months having started 15 games at Left Guard in 2019. Miami’s into him.

Behind the starting 3 are a couple of versatile Veterans more than happy to steal snaps. DJ Fluker and Jesse Davis will be Miami’s “Swingers” this year and that should be a comfort. If Kindly, Hunt and Dieter live up to their potential this unit could be extremely effective this year.

Thuney’s departure was talk of the town this off-season though completely expected. Belichick used the Franchise Tag last year to keep him on the roster and Onwenu’s development made it very easy for Bill to not pay him this time around. A classic New England procedure.

Starting 16 games at Right Tackle in 2020 Onwenu the 6th Round pick is a brute of an athlete. Presuming Wynn and Brown become the bookends, Onwenu slides into the voidious shoes of Thuney with much hope. It makes for an extremely powerful left side of the line which will suit a (healthy) Newton run offense.

The smart David Andrews returns at Centre backed up by ex-Dolphin Karras. Another player that’s sampled the 1 year Florida sabbatical. Neither Centre is top tier or explosive but neither will cost you negative plays or games.

On the Right Side Shaq Mason will be pushed by Justin Herron. Mason is very reliable and quietly graded out at an 84.5 PFF in 2020. Will Sherman rounds out the group as a 6th Round pick from Colorado.

Fresh off the back of picking a high value Left Tackle and then the anointed Franchise Quarterback, Douglas (GM) went straight for an interior Offensive Lineman with his second 1st Round Pick. So excited was Joe for Alijah in fact, he dealt away 23, 66 and 86 to Minnesota in return for 14 and 143. The heart wants what the heart wants.

Vera-Tucker was a standout at USC and won the Morris Trophy in 2020. A peer reviewed Lineman award that Penei Sewel won in 2019. He will slot straight in between Becton and McGovern (of the Clan McGovern) forming a formidable left (blind) side Castle Wall.

On the opposite side Greg Van Roten is perfectly serviceable if underwhelming. With all the changes in New York and such a dependency on Rookie playmakers, simply having a consistent, reliable starting 5 will go a long way to ensuring a handful of victories in 2021.

McGovern as the 11th highest paid Centre in the league will need to solidify his play under Saleh and take full leadership of this unit. Feeney and Lewis are expensive backups that will need to push hard through training camp. Feeney will push McGovern and Vera-Tucker and be invaluable in the case of injuries. Lewis may need to try his luck on the right side to get snaps.

Tristan Hoge is the new blood on the interior. He was a canny pickup by Douglas despite a tumultuous 2019 with injuries and then enduring Covid and pneumonia in 2020. In 2018 he started 13 games for BYU at Right Guard while Wilson was at Quarterback for 7 starts as a Freshman. Never underestimate the power of familiarity and learned cohesion.

Guard is a funny old position. Centre is incredibly important. As a unit these 3 guys have an enormous bearing on an Offense’s success and/or failure. A bad Snap can change a game. A slow Guard can get a Running Back crushed for a loss. Poor teamwork will have your QB running for his life.

In light of those factors it’s strange how few teams can claim to have a great Guard pairing. Let alone having a top tier Center sandwiched between them. The AFC East bares this out. Top OLine are hard to find in bunches, even harder to keep everyone paid if you do.

Miami’s unit currently implies the highest growth and ceiling. The inverse of course means that they could get derailed quickly if development isn’t forthcoming. New England has a group of intelligent athletes in a winning Culture, with either Newton or Jones I don’t see New England’s Offensive problems stemming from poor line output.

Over in Buffalo, Morse is the lynch-pin. On paper they have a weakness at Guard but 2020 was living proof of that fallacy. Will Defenses find any soft spots in 2021? In New York hope reigns supreme. I can’t honestly argue with the age old philosophy of building through the Trenches. Now with Captain Darling under centre,  Jets fans’ mental health relies largely on how the Offensive Line gels and grows. The new additions certainly look the part.

Next week we enter the final phase of your position room breakdowns with Linebackers and Running Backs. In the midst of the NFL off-season why not check out the British Amatuer (BAFA) Summer League fixtures? 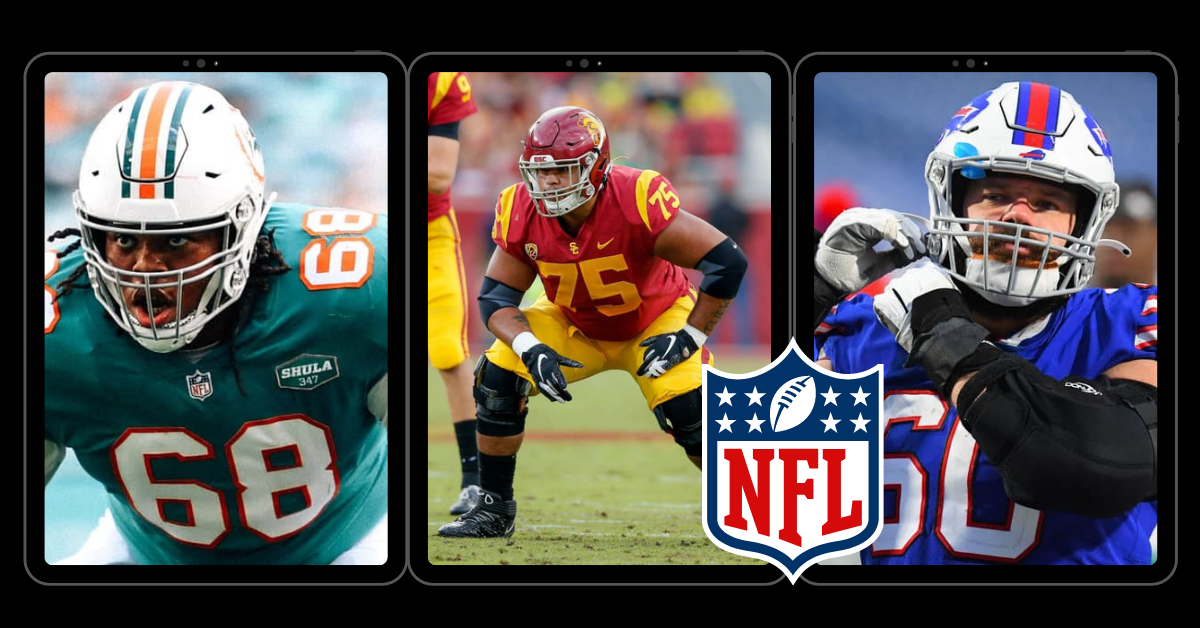