At the NFL level, the Tight End position is morphing before our eyes. Historically they performed inline blocking and offered robust short-yardage “get out” for Quarterbacks under pressure.

In recent times, schemes and athletes have combined to make Tight End one of the most interesting, exciting and important positions in modern Offences. It has also swollen the annual cost if you wish to roster one of these Neo-Unicorns.

George Kittle and Travis Kelce (the NFL’s best) are running rampant across all defensive variants. Following in the footsteps of “Gronk” but adding new layers of YAC ability and intrigue. Darren Waller (LVR) is in a worthy third place. Having a Safety or Linebacker that can contain these versatile Mustangs is becoming a priority.

NFL Offensive Coordinators are deploying 11 personnel at 60%+ of their game-plan and College football is breeding more athletic spread offense TEs. Y-ISO (isolated) has been around for a half Century. Don Coryell freed Kellen Winslow from the 3 point stance to the Y position and Joe Gibbs prescribed it in his ’80s Washington teams. But it’s taken on a whole new variant with (Andy) Reid’s sorcery and his gifted array of play-makers.

While the position elites rack up Primary Receiver numbers and highlight-reel clips, there are dozens of more traditional Tight Ends plying their trades – by way of brute force – in the trenches and running game.

In your last article we looked at Safeties that could contain this new breed, but who are the (Tight End) “ones to watch” in the NFL AFC East: depth charts, Cap hits and Rookie potential scale.

On the face of it Buffalo’s TE room looks a little devoid in talent. Appearances are not deceiving in this instance. McDermott and Allen don’t care much about 2020! Brian Daboll (OC) has raised Josh Allen to be New York State’s premiere Swashbuckling Air Traffic Controller. Allen racked up more air miles with all of his top 5 receivers than TE1 Dawson Knox.

The Bills game-plan revolves around WRs like no other in the NFL. Daboll had 3 or 4 WRs on the field a heady 86% of Buffalo’s offensive snaps in 2020. This makes for thin pickings if you’re a Bills TE. As Beane (GM) made no overtures at the position in either Free Agency or the draft this year, one is entitled to assume little will change in 2021.

Knox is a big unit and provides a solid body for goal-line packages or surefire running plays. He doesn’t provide much more beyond. He could be pushed by Sweeney during this year’s training camp.

Sweeney was drafted in the 7th round in 2019 from (then) run-heavy Boston College. He ably demonstrated a complete skill set at the college level. Sadly his rookie year was marred by Covid19 and complications. Beane has stated he will be in full health for 2021.

Quintin Morris is an interesting NFL UDFA acquisition. He had sterling early years as a wide receiver at Bowling Green including a 77 catch, 1100 yard and 11 TD’s before transitioning to TE. His Senior year was a tad muted, but we see Buffalo’s mindset here that pass-catching is the coveted skill. If Morris can out muscle Knox and Sweeney in the few snaps it’s required his hands may elevate him to number 6 in Allen’s Airlines.

Miami can consider themselves members of the 2nd tier club when it comes to pass-catching TEs. Gesicki is arguably top 5 in the league when it comes to wide alignment production. He’s a dynamic athlete with high character. When paired with a more traditional mould TE in 12 personnel and complimenting the diverse Miami receiver room Gesicki has a limitless ceiling.

The big question is what Miami’s plans are with the position moving forward. Grier hasn’t tipped his hat yet as to whether the Dolphins are comfortable with paying an elite TE salary. The new “Godsville” Offensive scheme is currently a mystery but in 2020 Miami favoured 1 TE sets twice as much as 12 personnel. If Miami is to follow the “Patriot way” Gesicki could be allowed to walk in free agency in return for a high Draft comp pick and a cheap TE room.

Behind Gesicki are Smythe and Shaheen. Both are more traditional dual role, 3 point stance players with Shaheen flashing more receiving skills. With the addition of Boston Colleges Hunter Long these three players are pitted against each other for 2 places in the medium term. Long has a high ceiling with impressive years as a run game compliment and a pass-catching feature piece. Shaheen received an in-season contract extension. Smythe appears, for now, as the outlier going forward.

Cethan Carter is the only other meaningful body in the room (Blount is an interesting athlete) as a fullback option, a position Flores (HC) seems to covet, so far unsuccessfully. Despite Christian Wilkins actively pursuing reps at the position, Flores would far rather Carter excels than have his Defensive Lineman fulfilling fantasies. With only 66 yards receiving and a handful of starts in 3 years at Cincinnati, he will need to bring the heat during training camp.

2020 was a comparatively horrendous year offensively for the Patriots. As Newton’s health degenerated quickly from an impressive week 1 outing against Miami, New England essentially reduced themselves to a running offensive reliant on Harris and Newton. Ryan Izzo was the only TE that seemingly interested Cam, until game losing turnovers put him in the “get your coat” category of Belichick’s roster overhauls.

The rookies earned only 21% of the 2020 snaps between them. Although it’s widely acknowledged the position is notoriously difficult to flourish in as a rookie, Bill isn’t a patient kind of Coach. As soon as Free Agency opened mid March, the navy blue cheque book and pen scribbled not one but two high profile TEs into the Pats position mix.

Smith signed a 4 year, $50 million deal in NFL Free Agency and left Tennessee. Over 4 years with the Titans Smith’s production slowly increased, peaking in ’20 with 41 catches, 448 yards and 8 TD’s. Henry also then signed (causing a media double take) a 3 year, $37.5 million deal and flew across the Country from L.A to Massachusetts.

Henry was the 35th overall pick in the 2016 Draft (from Arkansas). Slightly bigger than Smith with a year more experience. Henry logged 78% of snaps last year with 200 more yards but 4 TD’s less than Smith. Most perceive Henry to have more play-making ability and Smith to be a tougher “hand in the dirt” bruiser.

What is evident is Belichick isn’t willing to go through 2021 without integral TE production. Whether that means McDaniel’s (OC) wants to run more 12 personnel or whether the Patriots just want unrelenting high level production in 21 and 11 packages, these two players will be in their own private dogfight for the spotlight.

New York will lead at TE with their 2018 4th round pick Chris Herndon out of Miami U. He’s had an unassuming career to date, which, when you’re still healthy and getting snaps isn’t necessarily a bad thing. Herndon’s rookie year statistically is his best to date with 39 catches for 502 yards and 4 TD’s. He dropped off last year to 31 catches, 287 yards and 3 TD’s with 68% of the snaps.

Ryan Griffin played 40% of 2020 snaps primarily as an inline blocker. In 8 NFL seasons he’s only made 50 catches once, never exceeded 500 years and has 12 TD’s combined. Like everyone on the Jets roster we can expect a “bump” through better coaching, better playing calling and a better cast (on paper). I wouldn’t however predict a Ryan renaissance in any context, it’s just not in his make up.

Tyler Kroft enters his 7th year after 4 in Cincy and 2 in Buffalo. He’s rarely seen more than 20% of snaps with little reason to impress. Except, 2017. He started all 16 games, caught 7 TD’s off 42 catches and a 9.6 Y/R. That was a year when Tyler Eifert was placed on I.R and Bill Lazor took on play calling duties after an 0-2 start led to Ken Zampese being shown the door.

Kenny Yeboah is a reach but worth a flyer as a UDFA. He had a solid Senior season at Ole Miss with 27 catches, 6 TD’s and over 500 yards. The Scouting consensus however, sees him lacking in power, commitment and aggression on the line. Coupled with poor focus on the ball which created unacceptable errors at the Pro level. His upsides are, after catch play making and contested catch power.

The Jets have 3 Veterans to battle it out over the summer. I feel they are all a bit pedestrian yet all could have the proverbial “fire” lit by the new coaching staff and show-out. If Wilson produces the gravy (or better) in 2021 then I would expect Douglas to target a TE in the early rounds of next year’s Draft. The Jets are sitting on 2 1s and 2 2s. As it stands that could shake out as: CB, TE, OLine, CB. Douglas will ensure Wilson is protected and has outlets to keep his career arc trending correctly.

New England have arguably the two most rounded TEs in the division on their roster. Much will depend on the starting QB. If Newton is healthy then I expect Smith to win the battle for snaps in 21 and 11 personnel run heavy schemes. Should Jones win out or replace Newton when the inevitable injuries hit I think Mac will utilise Henry profusely as he battles the difficulties of year 1 learning curves. Equally look for a lot more 12 personnel base schemes.

Miami holds the best suite of TEs, providing a wealth of skill sets. Gesicki is one more step from joining the Neo-Unicorns if the ball comes his way enough. A lot of Gesicki’s future depends on if Fuller stays healthy and Waddles development. Should those two find their groove Gesicki could find his impact severely marginalised. Shaheen and Long should comfortably absorb the remaining TE snaps with Smythe  looking over his shoulder.

Buffalo will be too busy applauding the latest installment of the Daboll & Allen show – to worry about Tight Ends – as 5+ receivers attempt to break 1000 yard seasons. Should this year continue trending up with roster development I will be very interested to see the priority level Brandon Beane places on drafting a TE next year.

Next week we will start with your breakdown on NFL AFC East Edge Rushers. Join me @CJEphgrave on Instagram and Twitter. 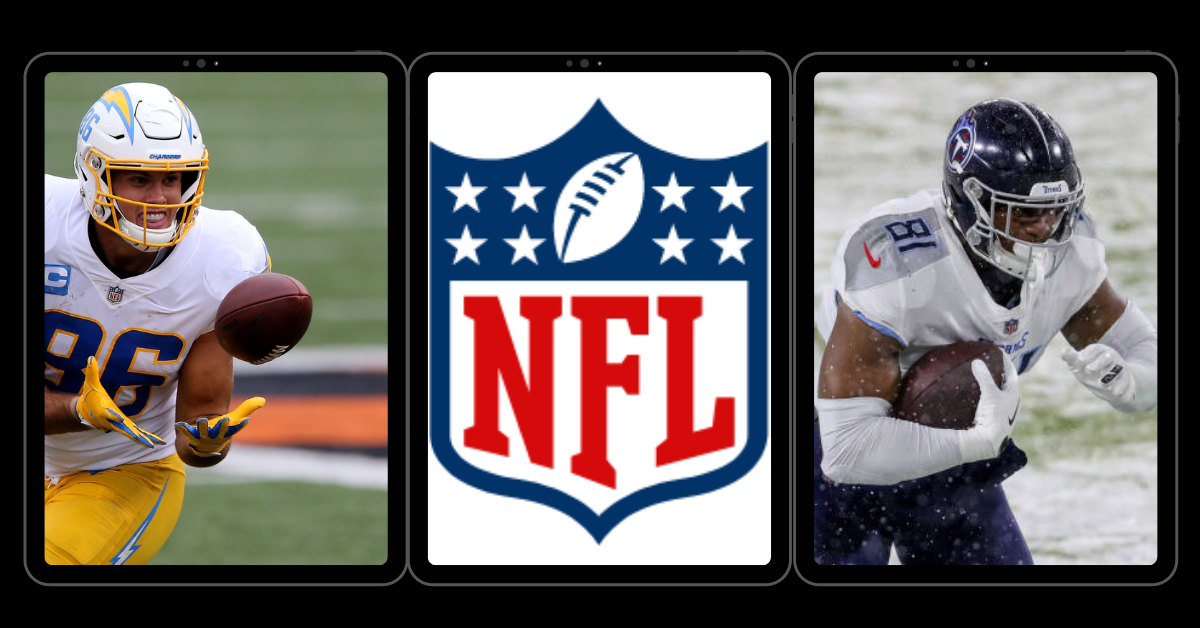