In the NFL, the lines in the secondary become more blurred by the day. Not so long ago there were clear roster delineations; Free Safety; Strong Safety; Corner; Nickel. Now those monikers apply to play by play positioning rather than personnel.

Increasingly as we browse through official team rosters we see “DB” dominate the defensive lexicon, with the occasional “CB” reserved for the elite perimeter maestros. As Brian Flores (Miami HC) has often sighted, Miami doesn’t differentiate between its secondary players when drawing a schematic.

The NFL is a league that loves to pass and adopts many spread packages. In 2020, 11 personnel (3 WR’s) ran 60% of snaps, 12 (2 WR’s) personnel 20% of snaps. It’s also worth noting Buffalo ran 11 personnel  71% of snaps, KC 73% and Tampa 62% – conference championship teams and the Superbowl winner. Coupled with diverse, athletic, pass-catching TE’s (your next breakdown), defensive coordinators need to account for 4 capable, speedy pass-catchers stretching the field.

This inevitably has led to an increase in Nickel and Big Nickel packages. Concurrently, changing the types of athletes a team needs to create competitive match-ups. With 2 Linebacker packages becoming the norm, both of them need speed and the requisite coverage awareness. In the backfield 2 capable man-corners, a true free safety (serious speed and ball skills) and tough box Safety that can tackle hard yet peel into tight coverage on elusive receivers.

Big Nickel Defenses are nothing new, famously introduced by Fritz Shurmur in the late ’80s, his “Wolverine” 4-2-5 package became a standard and helped Green Bay secure a Superbowl in 1996. The key difference a quarter of a century on is how team-building philosophy requires the modern Defensive Back to be a chameleon. The buzz phrase is “Swiss Army Knife”, which is the gold standard now for a secondary player. The flexibility for a DC to be able to line up their secondary in multiple positions greatly affects the opposing QB.

So how does the AFC East Secondary landscape manifest?  Depth, Cap hits and rookie potential.

We can say right off the bat that Buffalo’s starting Safeties, as a duo, are the division’s best. PFF graded them as Poyer 75.2, Hyde 68.7 in the 2020 season. Between them, they logged 2389 snaps and nearly 150 solo tackles. Throw in a handful of disruptive turnovers and 17 years of collective NFL starting experience and it’s easy to see why Buffalo has a Championship calibre defence. Hyde’s importance was cemented with a two year (near) $20 million contract extension this May.

Damar Hamlin is an intriguing prospect, snaffled at pick 212 (6th Round) in this year’s Draft. A tall, rangy athlete, he has been a productive starting Safety at Pittsburgh for the last three years. He has established a resume of consistency and productivity while flashing big-play potential.

In a secondary lacking quality depth, Hamlin has a real chance – with quality coaching – of becoming a frequent snap taker and robust starter in any injury events. Thompson has solid foundations and is bulky and tough enough to take on a box safety role.

As we mentioned in the Cornerback room, Buffalo has a top-quality core of starters. However, any kind of injury blight will expose them mightily in a league full of talented receiving corps. I will restate my belief that Brandon Beane makes moves to strengthen DB depth later in the Summer.

Miami chose to address their Safety room this off-season to some surprise. Though the Miami Beat media had reported Grier’s intentions back at the end of the season. Bobby McCain’s contract wasn’t appropriate for Miami’s plans and depth at the position has been problematic. Mahomes punished Miami as soon as McCain missed reps in last year’s regular-season match-up.

Eric Rowe has blossomed as a Strong Safety shadowing TE’s, this off-season will show us if he can make one final step in his development and snuff out the league’s elites. He’s set himself this target when Miami takes on Las Vegas in Week 3 and Rowe gets a chance at redemption against Waller.

Brandon Jones will be the Big Nickel sub and his rookie season provided a positive foundation to build off. He’s mentally adept and as tough as a “Well Done” Steak. His passion and love of the game are self-evident. Coupled with Miami’s coaches priding themselves on unlocking talent in the “year 2 jump” it’s reasonable to expect significant snaps for Jones in ’21.

The unknown going into the season is 2nd round pick Jevon Holland. Let’s not dance around the bush on this one. Flores loves this kid. While Miami fans dropped their collective Popcorn and Denver squandered Draft capital to leap ahead of Miami in the second round, Grier and Flores chuckled. Seemingly the Dolphins had Holland in pen as the starting Free Safety for 2021. It’s Jevon’s to lose and he will be very cognisant of one Jason McCourty breathing down his neck during training camp. This is a fruitful and manicured scenario for Miami.

I must apologise right off the bat for my heinous error last week when I omitted Jon Jones in New England’s band of Corners. He is of course a top-level starter who has had 60% plus of defensive snaps in the last two years. With 60 solo tackles and a brace of interceptions, he will be a key member of the Patriots secondary again this year.

Devin McCourty returns to prowl the deep third after 11 years in the league. Incredibly he has only missed 5 games in that time. In fact, only 2 of 11 years has his snap count dipped below 90%. His first 3 seasons were his most impressive box numbers when he was playing Corner, but his experience, knowledge and leadership on the back-end are timeless.

Adrian Colbert had a career year playing Strong Safety, returning to his 2018 Chargers form. With a couple of interceptions, 76 solo tackles, 7 TFL and 4 PD he makes a worthy partner for McCourty.

Kyle Dugger and Joshuah Bledsoe provide the intrigue. Dugger made solid contributions in 7 starts (14 games) earning over 500 snaps and 46 solo tackles in his rookie outing. He’s a big, physically talented athlete from Lenoir-Ryhne who has a bright future.

Joshuah Bledsoe is a wise Draft pick at 188 (6th round). He has a very strong and improving career arc after 4 years starting for the Missouri Tigers. His character and diligence are tailor-made for the “Patriot Way”. Dugger and Bledsoe have the opportunity to fill the spacious boots of now-retired Patrick Chung.

Marcus Maye is the only stalwart in the Jets Safety room going into 2021. The 4-year journeyman ably kept his head while those around him were losing theirs in 2020. Playing 100% of the defensive snaps and earning 2 interceptions, 11 PD, 2 FF and 52 solo tackles he should be a metronome for Ulbrich’s secondary this year.

Ashtyn Davis is a whiz-bang waiting to go off in New York’s secondary. As with most everyone on the roster he can be given a pass on the forgettable 2020 season. As a California Bear, Davis had a robust 4-year career, splitting time as a Corner and Safety while notching over 100 solo tackles and 7 interceptions. Look for him to blossom in the Saleh regime.

I must mention again the addition of Nasirildeen in this year’s Draft. He is the reason I have given the Jets a 3 on their Rookie Potential Scale. Despite being listed as a LB, I believe he will play 300+ snaps at Safety this coming season and I believe he will flash and splash.

Lamarcus Joyner will most likely be the starter alongside Maye on paper. He is a 7-year veteran armed with experience and training camp starts. However, he appears to have long peaked from his (average) ceiling of play with the Rams in 2017 and 2018. Once live bullets start flying this season I predict youth will prevail and Davis will dominate the Safety partnership with Maye. Nasirildeen will impress as a big Nickel and TE policing Linebacker.

When you look at the AFC East landscape it’s apparent that all 4 Franchises have put hierarchy and their GM/HC partnerships at the forefront of the challenge (Belichick being one and the same). Of course, we haven’t seen a Saleh end product as yet, but Douglas has presided over 2 capable to excellent Drafts (Wilson will be the deciding factor in history).

Buffalo needs depth across the secondary while having individual elite talent and a proven, experienced cohesion that earned them a Conference title game. New England looks experienced, talented and thoroughly under their Masters (Belichick) spell. They will have to navigate a new pothole as Gilmore recently expressed his intent to boycott mandatory camp in the hopes of an improved contract. This could easily lead to a swift exit if a willing partner can be found (I’m floating Arizona).

Miami seems to be building a strong and coherent unit. Much will be decided by Holland’s training camp, Jones’s development and McCourty’s ageing ability. As Gilmore is a factor when talking about defensive backs, Howard’s contract could also prove an undoing for Miami as the Summer moves on. In fact, Gilmore’s outcome will almost certainly cause some dominoes to fall.

The Jets have a plan, I half feel Douglas drafted Nasirildeen specifically to deal with Henry, Smith and Gesicki (highlighted in your next breakdown). Saleh and Ulbrich will be forced to seek damage limitation on the back-end this season and hope to mitigate weak Corners and rookie Safeties with robust play from their front 7. It may well work!

I favour Miami as a complete secondary. But football is not played in a vacuum and there are many variables to unfold between now and January. What excites me most is the vision each of these Teams is deploying. 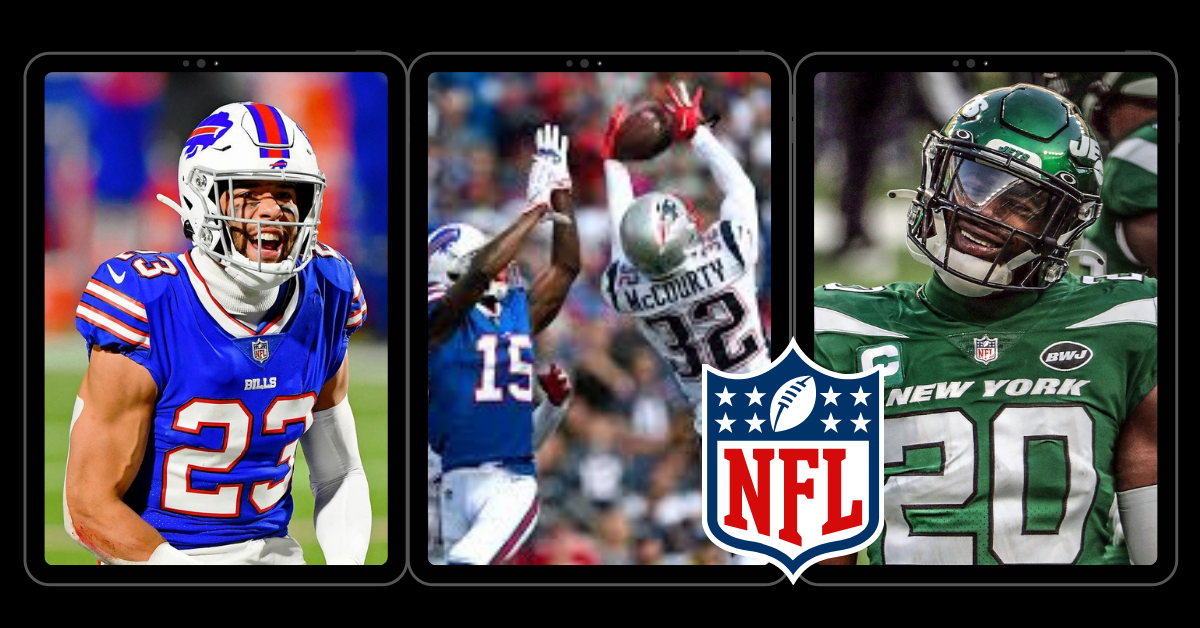