The NRL’s Magic Round was shrouded in controversy as a record-equalling 14 players were sin-binned through the course of the round and a further three sent off. The wave of on-field punishments came after the NRL announced it would take tougher action against above-the-shoulder contact, but has divided fans and commentators with several pointing to a perceived inconsistency and harshness in the crackdown.

There was still some magic to be had in this Magic Round, which in its second edition in the NRL saw all 16 clubs playing at Brisbane’s Suncorp Stadium.

Opening the magic were Wests Tigers with an adjusted line-up that shocked the Newcastle Knights.

Wests came under fire for moving Moses Mbye to five-eighth to partner the much-maligned halfback Luke Brooks, but the change worked in their favour as Brooks responded to critics with a stellar performance that included the opening try. Mbye also played a major part in steering the Tigers forward as miscommunications hampered the Knights’ own defence.

The regular five-eighth Adam Doueihi still inflicted further pain on Newcastle in the centres as he claimed a double, exploiting a stretched defensive line and then a fumbled catch attempt. Down 36-8 with less than thirty minutes remaining, the Knights’ comeback attempt came too little too late with just two more tries when sin bins had restricted the Tigers to 12 men.

Wests Tigers may be turning their fortunes around but plenty remains to be seen.

After showing plenty of promise in their last two games, the latest drubbing at the hands of Manly Warringah sees the Brisbane Broncos back at square one.

Tom Trbojevic starred once again on both ends of the field, scoring the first try off the back of Jason Saab’s line-break before rushing to prevent Herbie Farnworth responding four minutes later. By half time, Saab and Sean Keppie had boosted the Sea Eagles’ total to 20, while the Broncos’ only points came from a late and hard-earned try from Jamayne Isaako, who’d busted out of a nearly complete tackle.

Any hope that gave the Broncos of staying the fight soon died as Manly took full control. Losing Tyson Gamble and Jordan Riki to the sin bin within a minute of each other, Brisbane’s stretched defensive line struggled for the next ten minutes with the Sea Eagles piling on three tries. The eventual result was already clear by the time both players returned to the field, and coach Kevin Walters has seen it as a new low for the Broncos this year.

Manly now sit within the top eight and can prove they are one of the form teams if they beat Parramatta next week.

Second-half slumps still appear to be a massive sore point for Canberra, but this time they clung on to come from behind against the Canterbury Bulldogs.

A team effort consisting of a line-break and offload sent Corey Harawira-Naera over the line for the sole try of the first half, allowing the Raiders another early lead. They extended it slightly before half time with a George Williams penalty goal, but from there their luck turned against them again as Canterbury’s Nick Cotric barely found the line in the 48th.

The Bulldogs took the lead shortly after Jack Wighton was sin binned for taking out Adam Elliott’s legs, and had a permanent 1-man advantage when Josh Papalii was sent off for a shoulder charge on Tuipulotu Katoa. But aside from a try attempt helped by the ball rebounding off the goalposts and denied by desperate defence, Canterbury failed to capitalise, and Canberra hit back with consecutive tries to claim the lead back.

Dallin Watene-Zelezniak slid over to close the gap to two points with less than a minute to spare, but Sione Katoa’s fumble in the dying seconds ensured the Raiders would break their five-game losing streak.

South Sydney bounced back from last week’s horror thumping at the hands of Melbourne but still looked shaky at times in their win over Cronulla.

The Rabbitohs had been solid to start with as Benji Marshall worked his passing magic to send both Keaon Koloamatangi and Alex Johnston over the line. Even when down to 12 men for ten minutes after Jaydn Su’A shoulder charged Aaron Woods, Souths kept rolling as Cody Walker charged for the line after Dane Gagai cut through the defence.

A try shortly before halftime kicked off Cronulla’s fightback as Souths’ middle defence gave way for a time. A bizarre scramble for the ball in the 58th saw Woods score before Brenton Nikora brought the Sharks within a converted try. But Walker picked up his second off an offload to extend the lead again and Jai Arrow dealt the blow that ended Cronulla’s hopes of an upset.

Plenty of improvement is still needed from Souths as they prepare to host the Penrith Panthers next week.

Despite the hefty injury list, the Sydney Roosters are still finding ways to win.

The Chooks looked set to romp home with a convincing win over North Queensland with four tries scored in the first thirty minutes, despite Sam Walker’s poor conversion rate for the night. But after a sin bin to Sitili Tupouniua, the Cowboys backs made good use of the extra ball they had to come within two points of Sydney.

James Tedesco helped keep the Roosters just ahead, dashing through the Cowboys line and passing the ball off just as he was stumbling to Angus Crichton for the latter’s double. But Tedesco also caused some controversy: After appearing to fall into the tackle of Lachlan Burr, which caught him high and saw Burr sin-binned, Tedesco came off the field for an apparent head assessment before immediately coming back on, exploiting a loophole that has already been slammed.

The Cowboys failed to cause an upset, but are still looking up and with home games against the Knights and Warriors next up, more consistent 80-minute performances could see them challenge for a finals berth.

The only game of the round to not feature a sin bin saw the Warriors fall just short once again of a comeback upset.

Nathan Brown and Maika Sivo kicked off the first half carnage down the left side before Reagan Campbell-Gillard smashed through the middle twice. Josh Curran put the Warriors on the board after chasing Chanel Harris-Tavita’s kick, but the Eels held them off from there and scored again shortly after half time.

The second half saw Parra debutant Jakob Arthur, son of coach Brad Arthur, shine as he had a hand in that first try before claiming one of his own late in the half when he ducked out of an attempted tackle to crawl to the try line. It helped put the seal on the win for Parramatta as the Warriors had started to launch a valiant comeback.

Instead, the Warriors will seek their fifth win of the season against the hot and cold Wests Tigers next week.

Both the Melbourne Storm and St. George Illawarra Dragons had a tough afternoon against each other despite the former surging to a convincing 26-point win.

Back after being out for three weeks with a shoulder injury, Melbourne’s Ryan Papenhuyzen had a short-lived return after being knocked out by a late and high shot from Tyrell Fuimaono. Fuimaono was sent off for his trouble, temporarily leaving the Dragons down two men with a sin bin handed earlier. However, the Storm maintained a slow start to the game, a few tries apiece resulting in a margin of just four points at halftime.

But within a period of twelve minutes, Melbourne soared far beyond St. George’s reach, starting with Nelson Asofa-Solomona powering through four defenders and helping Josh Addo-Carr to a hat-trick. The Dragons’ Mikaele Ravalawa picked up a hat-trick of his own attacking Melbourne’s right edge but were otherwise quiet against the thunderous Storm.

While the loss of Papenhuyzen yet again is a damaging blow, Melbourne has there’s plenty more star power in them to go all the way.

The Gold Coast Titans have been on and off this year but their stoush against the ladder leaders was one of the more forgettable ones.

Penrith was at their best from the get-go, Nathan Cleary cutting up the defence twice within 16 minutes. Their determination to score as much they could show throughout, with one try-scoring play going through five sets of hands for 90 metres. Shortly before halftime, the Titans dealt further damage to their hopes of a comeback when Herman Ese’ese swung an arm out at Brian To’o’s head, resulting in the third and final send-off of the round.

The Titans wouldn’t find the tryline until 66 minutes in when Beau Fermor found a rare gap in the Penrith defensive line and dashed through for the try line. By then the Panthers had already laid on 42 points, and a try each way afterwards guaranteed Penrith what was perhaps their most convincing victory so far this season.

Out of the top eight, for now, Gold Coast will get a chance to work their way back into it with clashes against Canterbury and Cronulla coming up. 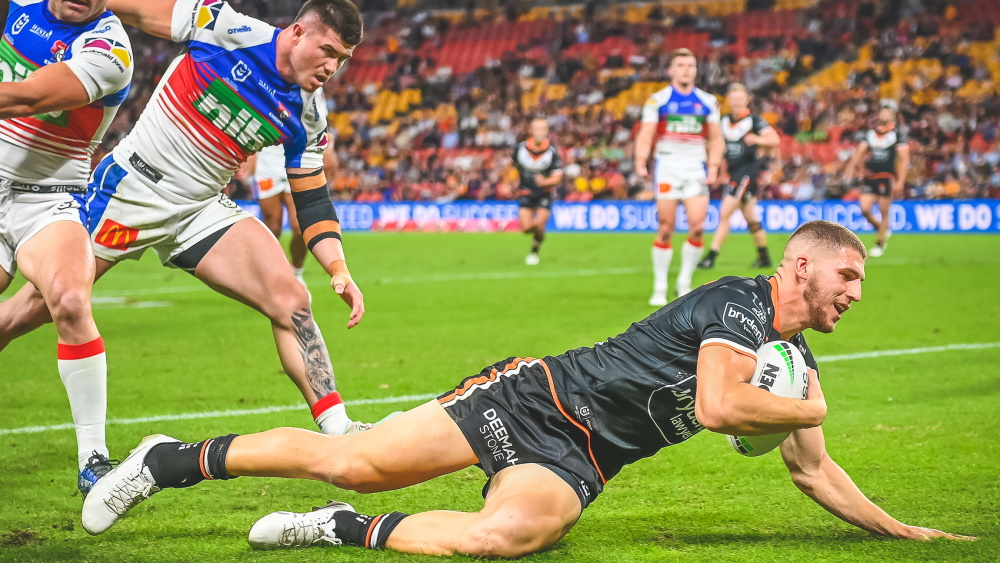