This Sunday night will be the last day of the regular NBA season 2020-2021 and there are still some teams fighting for places in the Western Conference before the start of the Play-in on Tuesday. We will have a look at the contenders for the title in each Conference.

At the last game, the Los Angeles Lakers led by Lebron James and Anthony Davis, reigning NBA Champions, want to avoid playing the Play-in after a season ruined by the long-term injuries of their franchise players during the season.

The best scenario to escape this Play-in for the Laker is to win over the Pelicans and hope for a loss of the Trail Blazers in their matchup against the Nuggets. In the case of a Play- in for the Lakers will have to face the Golden State Warriors led by Stephen Curry and Draymond Green.

Obviously, for the fans, this new system of Play-in is very interesting as they have to watch games with a lot of tension. However, for the players, it can be really exhausting as they have to play two games and then start the Play-offs only two days later. Some Superstar in the league such as Lebron James or Luka Doncic expresses their opinion about this new system.

“Whoever came up with that s… needs to be fired”

Conveniently, those declarations were made when the team was slipping in the ranking and getting closer and closer to the Play-in spots.

Now, is it possible for the Los Angeles Lakers to win the back to back title by going through the Play-in? Lebron James and Anthony Davis missed a significant part of the season because of injuries and they are not in perfect physical condition especially Lebron James as his ankle injury is more recent.  In my opinion, it will be considerably difficult for them to win the title this year. However, with players as experienced and good as Lebron James or AD, anything is possible if they find their rhythm quickly.

One of the other contenders for the title in the Western Conference is the Los Angeles Clippers. Despite the numerous games missed by Kawhi Leonard, Paul George and his teammates did the job to secure third place for the second franchise of LA. In the Play-offs, they could either face the Trail Blazers Portland or the Lakers. Those two matchups could be very difficult for the LA Clippers.

The third team who can pretend to the title in the Western Conference is in my opinion the Utah Jazz of Donovan Mitchell and Rudy Gobert ‘The Stifle Tower’ as they have the first seed of the Western Conference. The Jazz is by far the best team in this regular season, the franchise progressed over the years and it is maybe the best year for them to win the championship.

The only thing that could impact negatively on the team before the playoffs is the injury of Donovan Mitchell. Having said that, Utah’s guard should be in shape for the start of the playoffs where they could face the Warriors or the Laker if they get their ticket for the playoffs through the play-in.

In the Eastern Conference, the spots for the play-in and the play-offs were almost all assigned before the last games. Nevertheless, the New York Knicks wanted to assure their fourth seed.

The first spot of the Eastern Conference, the Sixers with Ben Simmons and Joel Embid who can pretend to the MVP trophy. The Sixers have had a great season so far, Embid and Ben Simmons are well supported by the role players around them like Seth Curry, Tobias Harris and Dwight Howard. It seems that this year they can at least aim for the Eastern Conference Final. In the first round of the 2021 Play-offs, the possible opponents for the Sixers could be the Wizards or the Celtics.

The second team in the Eastern Conference that can be able to win the title this year is the Brooklyn Nets. The roster of this team is more than impressed with Kevin Durant, James Harden, Kyrie Irving and Blake Griffin. In terms of team composition, the Nets are clearly favorite for the title.

Unfortunately, the Big 3 of Brooklyn played only 8 games together before the game of Sunday night. Nonetheless, with players as good as KD, Kyrie and Harden they have all the elements to be able to go through and participate to the NBA Finals.

The last team from the Eastern Conference is the Milwaukee Bucks led by the double MVP Giannis Antetokounmpo. After a slow start at the beginning of the season, the Bucks finally started to dominate with Giannis, helped by an excellent Jrue Holiday that reveals himself as a great addition to the team.

Their first playoff round should see them face off the Miami Heat, the team that outplayed them last year. It should be a good series even though the Heat is far from the same level they showed last year. The Bucks should be able to reach the Eastern Conference Final without too many difficulties.

ALSO READ: Kobe Bryant is Officially a Hall of Famer

Even though they were not mentioned in this article, some outsiders like the Suns or Nuggets can have serious chances to get their hand on the Larry O’Brien Trophy at the end of the season.

Who do you think should win the title?

Do you think there will be any surprises? Let me know in the comments! 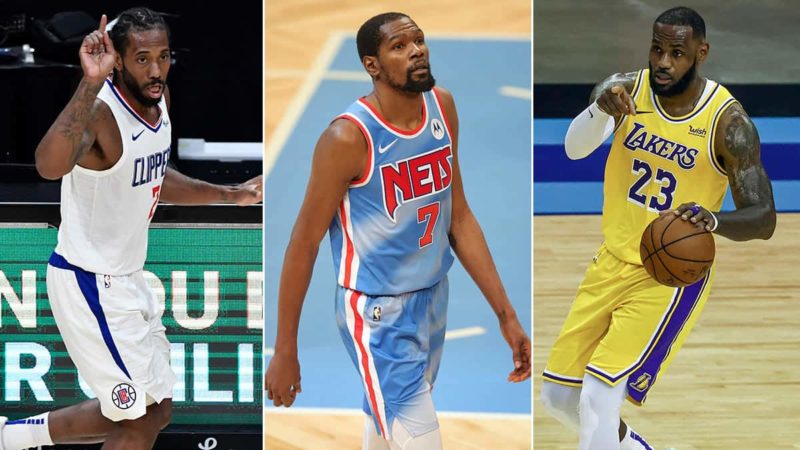