The final games of Round 13 in the Premier League took place on Thursday evening and it saw teams at both ends of the table looking for points for very differing reasons.  The 6 pm game saw us in the Midlands as Villa welcomed Burnley to Villa Park…

Villa has been bonkers lately, after beating Liverpool 7-2 at Villa Park they have lost three there on the spin, to Leeds, Brighton, and Southampton, yet, they had won at Leicester, Arsenal and Wolves, as I said bonkers.  How would they get on against The Clarets?

The visitors had just won at Arsenal too and had only lost one of their last five so they would have been full of confidence and knew a point would take them back out of the bottom three, whilst if Villa could end that losing run at home, they would go up four places to seventh.

Bertrand Traore spanked a shot just wide from a corner after just five minutes for the hosts before Ollie Watkins then skimmed an effort across goal as Villa began the better in the opening exchanges, but Burnley then went close after twenty minutes when Ashley Westwood side-footed a curling effort about two yards wide.  It would have been a screamer had it found the net.

The game was becoming rather open and Burnley went close again, and it took a marvellous from Emi Martinez to deny a Chris Wood header, whilst down the other end Anwar el Ghazi curled over, it most certainly was not a boring contest thus far that was for sure, and we had only reached the midway point in the opening half.

The chances continued to come, and Villa went close again, Ahmed Elmohamady’s shot taking a deflection off Watkins and was heading in until James Tarkowski headed off the line, then Jack Grealish, who was heavily involved in the middle today, sent a backheeled volley wide of the Clarets net.

Seven minutes before the break Villa struck the woodwork, although it was an outstanding save from Nick Pope, getting the slightest of touches on an el Ghazi free-kick, and then Villa hit the woodwork again just before the break when a corner saw Kortney Hause thump a header against the bar from about seven yards out.

It had arguably been the best goalless half of football ever witnessed this season; would the game keep up this tempo in the second period?

Villa went close yet again early in the second period as the brilliant Grealish ran at the visitors again, then found Traore whose low cross was cleared to Watkins who headed at goal, but Pope made a good save, before another Villa chance saw el Ghazi flash a twenty-five-yard effort a few yards wide of the far corner.

To be honest, it seemed like Villa could play until the new year and they would never score in this one, and you wondered if they may pay for all these missed opportunities?

The visitors had a rare shot at goal in the second half when Ben Mee struck straight at Martinez, whilst guess what, Villa passed up another opening after Grealish fired into the side-netting after yet another mazey run, he had been impressive again and is surely one of the best players in the league who should defo be going to the Euros next year.

With two minutes left Tyrone Mings almost headed the hosts in front but saw his powerful header go just wide, and then Grealish swung a shot over the bar, it just was not their night in front of goal, it had been twenty-seven, yes, TWENTY-SEVEN efforts at the Burnley goal, and six stops from Pope.

It meant the hosts did end their losing run at home, but they should have ended it with a win and not just a point, whilst for Burnley, they would have been delighted to pick up a point and in doing so climbed out of the bottom three.  Grealish was furious at the end, that told you everything you needed to know.

The Blades poor start to the season is well documented, just one point from twelve games and just five goals in that time, and there 3-0 loss at Southampton last time out was a desperate performance, and they really needed to get a win sooner rather than later if they were not to be cut adrift at the bottom.

They were up against a United side that in the league at least were getting results, four wins and a draw in their last five so the Blades knew they had their work cut out to get anything from this contest.

The hosts knew defeat here would leave them nine points from safety with almost a third of the season played, whilst a victory for the visitors would take them level with fifth-placed Everton, with a three-goal win seeing them above the Toffees on goals scored.

Could the Blades cause an upset then? They made a good start, and five minutes in had the lead after David McGoldrick, who was in for the injured Oli McBurnie, netted after Dean Henderson, on his return to Bramall Lane, had a nightmare, as after he had played a one-two with Harry Maguire, Oliver Burke slid in to close down and won the ball, allowing McGoldrick to tap home. You could say it was an early Christmas present for the hosts.

Man United though had won all six away from home this season, and five of those had seen them come from behind to win, so this was just reverting to type right?

Well, they were nearly two behind on the quarter-hour mark when John Fleck curled wide from the edge of the area, but it was so nearly 1-1 three minutes after that when Marcus Rashford put the ball over the bar, although the flag had gone up anyway, although it was a tight call and may have gone to VAR had it hit the back of the net.

On 26 minutes though Rashford did find the net, running onto a long ball over the top from Victor Lindelof and bringing it down with a superb touch before lashing in a rasping drive from sixteen yards out, it really was some finish and the visitors had bounced back in style, and then seven minutes later they had turned it around just like that when a defence-splitting pass from Paul Pogba saw Anthony Martial in on goal, and although Aaron Ramsdale came and got a touch on the ball, it fell to Martial again to poke home.

The hosts were shell shocked and after such a good start were now behind, and they nearly fell further behind when Martial freed Rashford, but his low shot was saved, but then saw McGoldrick skip past Lindelof before lashing a shot at the near post which Henderson saved, as the hosts tried to level before the break.

They could not though, and the visitors did lead at the break in a game they had started slowly but once then had found their feet cut the hosts open at times and caused the home side a lot of headaches in defence, and Sheffield United was staring an eighth straight loss in the face.

They had not done too badly though, and they were still very much in the game, so could they respond in the second forty-five?

Early in the second half, the hosts fell further behind as the brilliant Rashford netted his second after a superb flowing counterattack which involved Pogba and Bruno Fernandes, Rashford fired though the body of Ramsdale after the referee had played on following a foul on Fernandes, it was not great keeping, it was a great counter, and the hosts had it all to do now.

Understandably the hosts’ heads had dropped, and it was becoming a stroll for the visitors, and you felt it would be a long last quarter of the game for the home side, and Mason Greenwood stung the palms for Ramsdale as United went in search of a fourth.

Martial then was close to slamming home for The Red Devils after a scramble, whilst Juan Mata volleyed straight at Ramsdale, if Man United wanted more you felt they could easily get them in the final part of this game as they were in total control.

If the Blades could find a goal though it would make it an interesting last ten minutes or so, and they did just that as McGoldrick grabbed his second of the game, and It wasn’t great from Henderson again, as a corner whipped in (which wasn’t actually a corner as it came off a hosts player last) saw the keeper nowhere and Lindelof headed the ball against the back of McGoldrick head and saw the ball drop in, there were three minutes left plus stoppages, could they?

In the first minute of stoppage time Henderson pulled off a terrific save to deny a Lys Mousset effort as the hosts so nearly pulled off an unlikely comeback, and the visitors were now hanging on for the three points, which no one saw coming when they were cruising along after going 3-1 up in the second period.

Hold on they did though, and The Red Devils were up to sixth whilst it’s an eighth straight defeat for The Blades who have now lost nine of their games this season by just one goal, fine margins, but they remain bottom with just a point.

Round 13 is done and dusted then, how did this evening’s games affect the table? 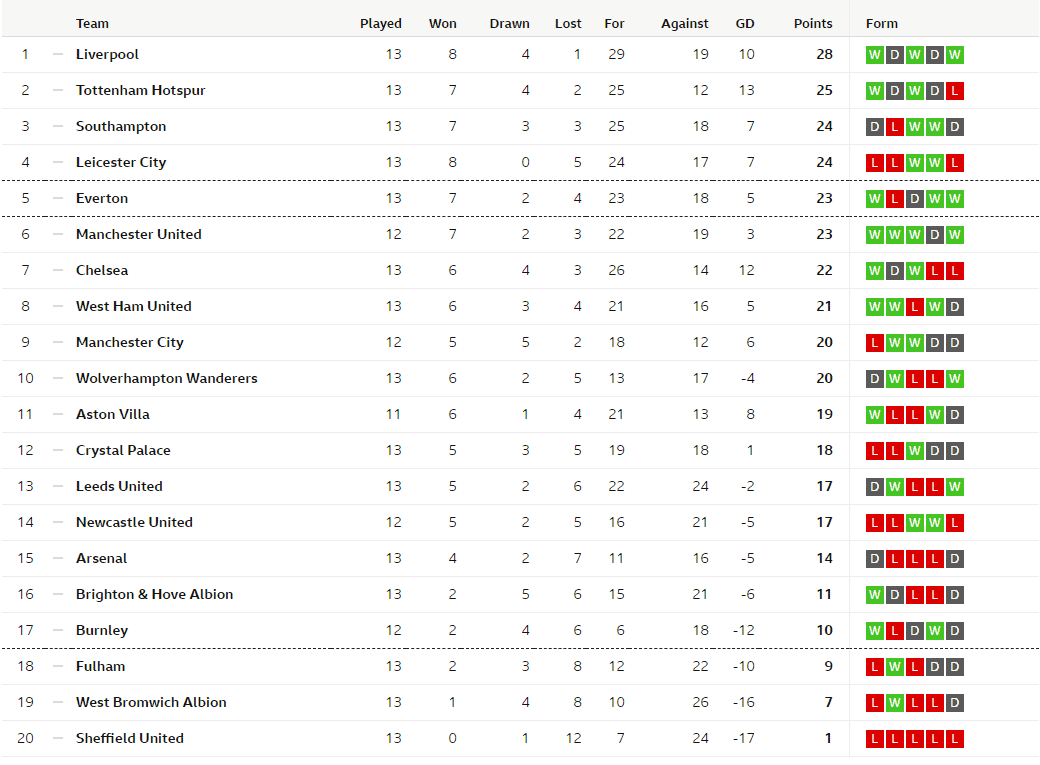 Burnley’s point this evening sees them out of the bottom three, whilst Villa, who had twenty-seven attempts on goal, remain eleventh.  And Man United kept up their 100% away record this season by coming from behind again to win and they are now just five points off leaders Liverpool with a game in hand, and yet some still want Ole out, be careful what you wish for eh?

If they can sort out their home form, they would be right up there in what is a wide-open season.  As for Sheffield United, they are now nine points from safety, after a 12th loss of the season this evening. Bleak.

Let us look ahead to Round 14, which takes place at the weekend

Top four clash in North London sees Spurs play Leicester whilst in form Southampton welcome Pep and his Manchester City side to the South Coast.  Big Sam’s first game in charge of West Brom is a midlands derby at home to Aston Villa, whilst there is a London derby at Stamford Bridge as seventh-placed Chelsea host eight placed West Ham United in the Monday night showing.  Should be decent!!! 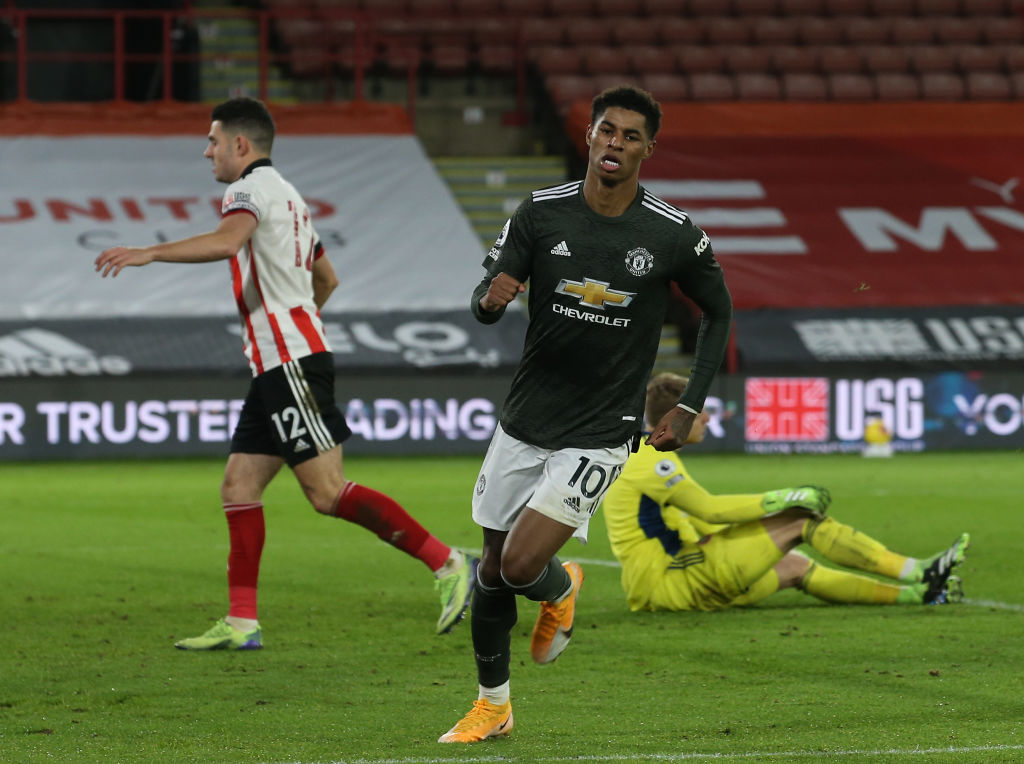