Crystal Palace let a half time lead slip to hand Leicester their 19th league win of the season.

Leicester went into tonight’s game with an opportunity to cement a top-four spot and extend the gap between Chelsea and West Ham. There was also some speculation on whether Brendan Rodgers would be at the club come to the end of the season, with the manager job now vacant at Tottenham.

Crystal Palace on the other hand was just playing for pride, knowing that they are likely safe from relegation and are unlikely unable to challenge for a place in the top half of the table.

Palace took a surprise lead when Wilfried Zaha fired the South-London club into the lead. Eberechi Eze squeezed a pass-through to Zaha after Wesley Fofana got sucked into making a challenge on Eze but failed to do so. This left Zaha clean through on goal who made no mistake in finishing smartly past Kasper Schmeichel.

Despite going behind the home side were threatening Palace’s goal but struggled to break down a stubborn defence, which was staying compact and looking to play out on the counter-attack. Leicester’s frustrations were growing which may have led them to make some uncharacteristic mistakes in key areas.

Leicester started the second half strongly and was rewarded with an equalising goal through Timothy Castagne. It was the man in form, Kelechi Iheanacho, who teed up Castagne to rifle the ball into the top corner. Palace almost hit back instantly, but Leicester defender Jonny Evans put in a last-ditch tackle to deny a clear goalscoring opportunity for Christian Benteke who was slipped in by Jairo Riedewald.

The game was opening up with both sides enjoying possession in each other’s final thirds and chances were certainly not a rarity. Jamie Vardy had an opportunity to take the lead for Leicester who made a mockery of Cheikhou Kouyate by turning him inside out with a run into the box from the left and forced Vicente Guaita into a save.

Minutes later, Benteke had a wonderful chance to put his side ahead from a corner. Benteke does well to hold of Castagne and towers above the rest to meet the ball to head it towards the goal. Unfortunately for him, it went straight at Schmeichel who had an easy save to make, but Palace should’ve been ahead.

Vardy then had a goal ruled out for offside on 70 minutes. Iheanacho almost added another assist to his name after receiving the ball on the edge of the box, swivelling, and threading a ball through to his strike partner who slotted it past Guaita, only to see the linesman’s flag up. Vardy was half a yard offside and the goal was correctly disallowed.

The foxes were piling on the pressure and seven minutes later, Vardy almost took the lead and again, it was great linkup play between the two Leicester forwards. Youri Tielemans played the ball into Vardy’s feet who played a quick one-two with Iheanacho and ended up in a one-on-one with the keeper but dragged his shot wide.

Rodgers’ side eventually took the lead after 80 minutes through Iheanacho, who had been a key part of Leicester’s attacking play in the game. Palace has a habit of conceding goals in the last 15 minutes and did so again with legs starting to tire. Iheanacho picked up the ball in his stride outside the box, sprinted past the defenders with ease, cut inside from the right and blasted a shot past Guaita to score his tenth league goal of the season.

This proved to be a deserved winning goal and put Leicester a step closer to that Champions League qualification once more, by extending the gap on Chelsea to four points. Palace stayed in 13th place and are three points behind Wolves with a game in hand. 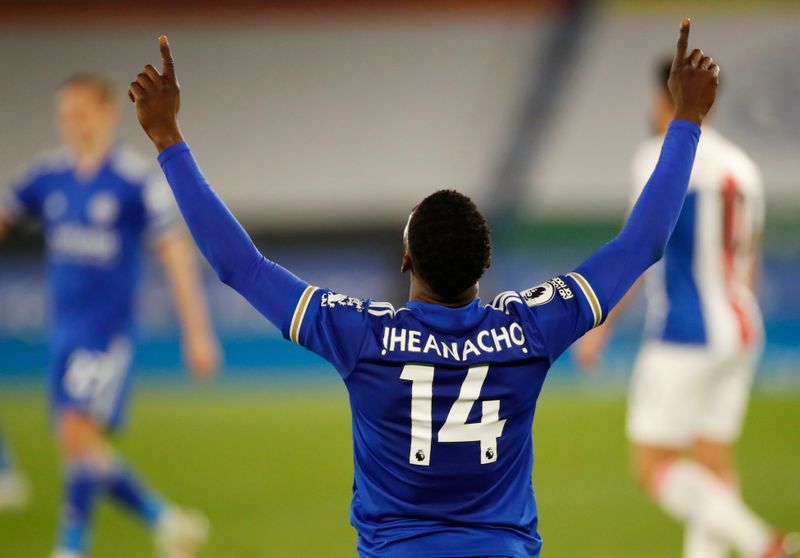