It will be the first Football World Cup to take place in winter, thus creating the longest gap between the two tournaments: but this is nothing to compare with many more astounding surprises that Qatar prepared. Qatar 2022 will likely be a World cup full of innovations, starting with the venue that will mark an absolute debut in the Middle East.

A particularly ingenious and modern World championship that aims to revive sports culture and worldwide passion for football which will revolve around the enormous urban centre of Doha, the capital. Hosted by eight brand new stadiums that combine futurism, sustainability and accessibility, with particular attention to visitors with disabilities, Qatar 2022 stands Qatar out as a major player on the international sporting scene.

Based in Doha, its refurbishment started in 2014 in view of Qatar 2022, including all stands, hospitality facilities, and the building of a massive innovative roof membrane that covers 70% of the stadium. Technology helps ensure players and spectators inside the stadiums remain fresh in a particularly warm geographic zone.

It will host the quarter-finals of the World Cup.

Innovative Al Bayt Stadium, based in Al Khor City (only 35 km away from Doha), hosts 60,000 seats giving life to a proper portable nomad’s tent (in homage to bayt al sha’ar and the nomadic people who lived in Qatar’s deserts). The captivating structure, which will be dissembled at the end of the games, will be donated to developing nations.

ALSO READ:  WC Draw: Who are the Winners and Losers of the 2022 World Cup draw?

Al Bayt Stadium was chosen to host the first Qatar game during Qatar 2022 against Senegal and the semifinals of the tournament.

The youngest structure of Qatar 2022, Al Janoub Stadium, was inaugurated in 2019 by hosting the Qatari Emir’s Cup final between Al-Sadd and Al-Duhail in front of 38 678 watchers.

Its shape, which reminds of a traditional Arab sailboat, makes it one of the most fascinating establishments of the World Cup. With 40,000 seats (which will be lowered to 20,000 after the World Cup), a portable roof, ready to close in favour of the air-condition, will host one eight-final of Qatar 2022.

Ahmad bin Ali Stadium (Al Rayyan Stadium) is particularly renowned for its adherence to traditions and Qatari culture, recalling the beauty of the desert and the importance of the family. Situated in Doha, it has a capacity of nearly 40,000 spectators and is ready to host the quarter-finals matches. However, this installation will be donated to developing countries after Qatar 2022.

ALSO READ:  Maradona’s 1986 shirt will be auctioned, but the legal battle has just begun

Photovoltaic panels and its modern layout aimed at letting the sun in make it a sustainable structure.

Located in Doha‘s cultural village, amidst universities and leisure centres, the Education City Stadium has accessibility at its core an

Located in Doha’s cultural village, amidst universities and leisure centres, the Education City Stadium has accessibility at its core and, with 20% of its materials recognised as green, is probably the most advanced stadium in terms of environmental sustainability.

The outer façade is made up of a myriad of coloured triangular LEDs that change colour with the sun for a very high impact visual rendering.

Doha’s Al Thumama Stadium is probably the most unique and enchanting structure with a very high impact, which with its circular white shape gives a tribute to the gahfiya hat, a men’s clothing must-have in many Middle Eastern countries.

The stadium is supposed to provide excellent cooling technologies to keep the temperature up to 18 degrees during the FIFA World Cup. The stadium’s surroundings will turn into a leisure hub with facilities for numerous sports, including handball, volleyball, basketball and swimming.

ALSO READ:  Maradona’s 1986 shirt will be auctioned, but the legal battle has just begun
Embed from Getty Images

Made in late November 2021 using shipping containers, it’s an absolute gem in the sporting design. Built with removable seats and other portable building blocks, it will be entirely disassembled and recycled after the tournament for other not necessarily sporting events reaching the ultimate sustainability paradigm.
Hosting 45,000 people, Ras Abu Aboud Stadium, another one in the city of Doha, will be home for one eight-final of Qatar 2022 and various other games with France, Argentine, Poland, and Brazil.

The national stadium of Lusail, with a net capacity of 80,000, will be inevitably the final stage of Qatar 2022 on December 18, in the artificial city of Lusail, in the north of Doha.

Made to be assembled and disassembled, it’s the first stadium to be utterly movable the same night after the game, topping the idea of a circus World cup, a complete disruption to the past and the European model.

Hosting Argentine, Portugal and Brazil’s games, other than the quarter-finals, semifinals and the final, it’s expected to frame some very iconic moments of the Football World Cup. 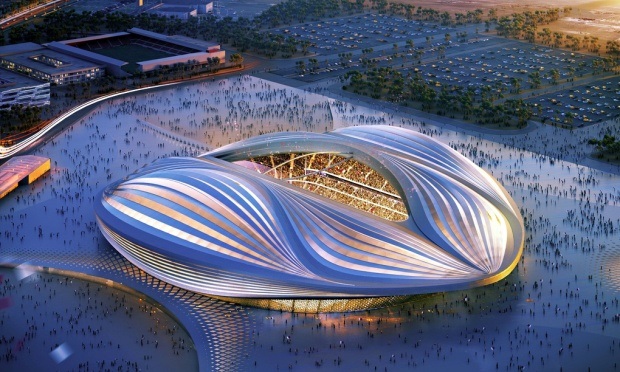