A last-minute penalty goal was all that separated Queensland and New South Wales as the Maroons clinched their second straight Women’s State of Origin title over the Sky Blues.

The successful defence of their 2020 title, which came after a grueling 70 minutes in front of 7,183 spectators at Sunshine Coast Stadium, means both states still have yet to win a game away from home in the four years the women’s event has been branded as State of Origin. New South Wales had won the first two matches in 2018 and 2019 at North Sydney Oval before the Maroons claimed their first win last year on the Sunshine Coast.

Playing under the name ‘Sky Blues’ for the first time, New South Wales hit an early lead when Isabelle Kelly crashed through two defenders and reached for the line four minutes in.

But they otherwise struggled in the pouring rain as the errors mounted, handing the Maroons the weight of possession in the first half.

Queensland looked to have responded just three minutes after the Sky Blues’ opening try when Destiny Brill broke through from dummy half. However the NSW defence had done enough to hold the ball up in the in-goal.

The Sky Blues were damaging in defence throughout as Kezie Apps and Hannah Southwell each made powerful tackles.

But with plenty of ball, the Maroons eventually found the line when Brill backed herself from dummy half again, and this time there was no doubt about the grounding. The successful conversion from Brown gave Queensland a 6-4 lead heading into half time.

But it wasn’t for lack of trying on the Sky Blues’ part to reclaim the lead. A desperate last tackle play with five minutes to go in the half changed hands six times before Jessica Sergis lost the ball and knocked it over the dead ball line.

The second half was more fiery than the first. Queensland were on the front foot early as Tiana Raftstrand-Smith bowled over Corban Baxter, but the Maroons missed some opportunities with their decisions in attack.

They defended soundly but found trouble when trying to get out of their own 20-metre line, coughing up the ball twice. One error allowed New South Wales’ Millie Boyle to charge, before she was tackled just short of the line and lost the ball while trying to get up for the play-the-ball.

The Sky Blues then had a golden opportunity to equalise after the Maroons’ Chelsea Lenarduzzi was penalised for a high tackle, and Maddie Studdon made no mistake in slotting the penalty goal.

Tensions between the two sides boiled over when Sergis and Holli Wheeler dragged Tamika Upton over the sideline, with Maroons winger Shenae Ciesiolka also involved in the ensuing push-and-shove.

But with Baxter having made a late tackle on Tarryn Aiken just prior, Queensland were awarded a penalty to be a strong chance of reclaiming the lead.

That was what they’d looked to have done two minutes later when Upton found the line without a NSW hand laid on her. But the Bunker disallowed upon determining that Julia Robinson had obstructed the defence in the lead-up.

However, the Maroons continued their relentless attack, opting to hammer the NSW defence in hope of finding the line instead of setting up a field goal.

And it unexpectedly worked in their favour when they received another penalty after Filomina Hanisi pulled the leg of Lenarduzzi almost directly in front of the posts.

The call from coach Tahnee Norris was to take the two and Brown delivered, securing a gritty victory for the Maroons.

Their male counterparts will be looking to show some grit of their own when they take on the Blues in Game II of the men’s State of Origin series later this weekend. Queensland’s shield defence campaign took a massive hit after being flogged 50-6 in the opening match, and they need to win this next one in Brisbane to keep their series hopes alive.

A win for the Maroons would mean Game III, which is scheduled to be played in Sydney nearly three weeks from now, will decide the series. New South Wales, meanwhile, are aiming to secure their third series win in four years. 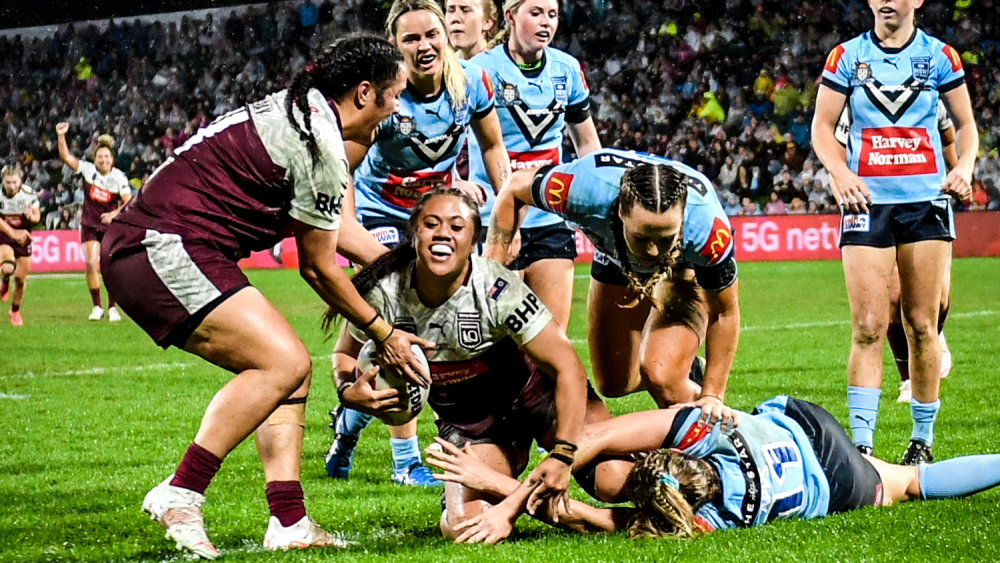