Ricky Stenhouse Jr took the lead on the final lap after a big push from Jimmie Johnson, which allowed him to get the jump on leader Kyle Busch, and he didnt look back from their. Stenhouse locked in his first career NASCAR Cup race, capturing Sunday’s Geico 500 at Talladega.

A huge crash involving Chase Elliott and AJ Allmendinger and almost a dozen others with 28 laps to go allowed Stenhouse to move up the ladder after a red flag,he was later able to advance to fourth through two future cautions with 10 and three laps remaining respectively.The win was along time coming for owner Jack Roush,as it was Roush Fenways first since 2014,when former Roush driver Carl Edwards won for him at Sonoma.

“We’ve been terrible for a long time, but this year, every race, we’re getting better and better,” Stenhouse told Fox Sports. “This car was so fast today, qualifying on the pole, get the win. It’s cool to have Jack Roush back in victory lane. This is cool, closest track to my home town and man, the fans were here this weekend.”

In the second stage Denny Hamlin gave Toyota its first taste of the front of the field. It was Hamlin’s first stage win of the season.He was followed by Kevin Harvick, Blaney, Truex, Johnson, Kyle Larson, Kurt Busch, Kahne, Jones and McMurray.Kyle Larson eventually finished in 12th, allowing him to maintain his points lead over Martin Truex Jr in the standings

Next week will be a Saturday night race at Kansas. 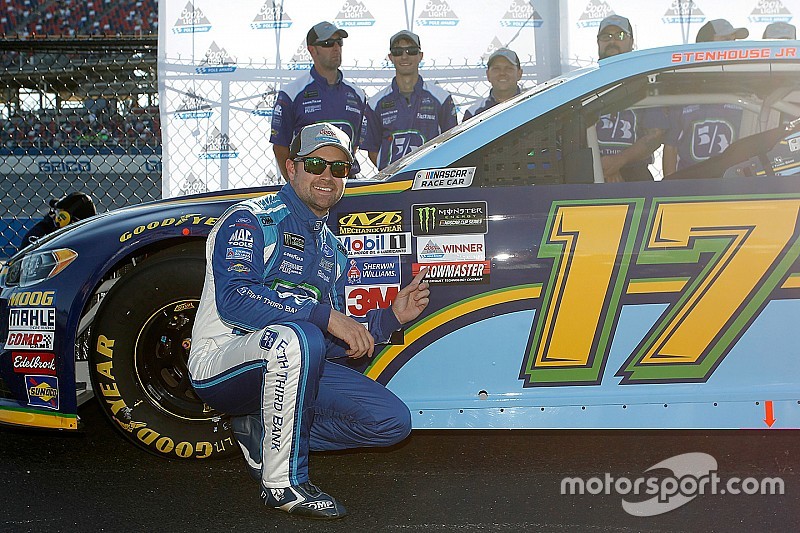