The infamous 0-9 fixture of the 2019/2020 season is back. It’s of course Southampton vs Leicester at the Saint Mary’s stadium. I won’t bang on about the 0-9 though because if, like me, you watched any build-up or commentary to the match you would know this was mentioned about 100 times.

I was worried for Southampton the moment the team sheets came out. The first worrying sign was that attack, it looks toothless without Danny Ings and asked myself where do these goals come from?

But within 2 minutes right-back Kyle Walker-Peters puts the ball in the back of the net for Southampton after beating Jonny Evans for pace. No celebration however as the goal was quickly ruled out for offside; to the relief of the Leicester boss, Brendan Rodgers.

The first 10 minutes belonged to the Saints as their high press and pace were causing issues for Leicester’s dozy defence, which looked slow from the off.

Liverpool Loanee Takumi Minamino then delivers a ball in from the left-wing and sets up English youngster Nathan Tella for a great opportunity. Even with all the time and space he had, Tella miss hits the ball and slowly rolled into the arms of Kasper Schmeichel. Southampton was keeping true to their track record of coming out of the gates sharp.

This fast start came to an end by the sending off of centre back Janik Vestergaard in the 10th minute for a studs-up challenge on veteran Jamie Vardy. Vestergaard took a heavy touch and allows Vardy a sniff at goal (a defender’s nightmare). He wins the ball back but ultimately slides into the left ankle of Jamie Vardy.

It looked like an unfair dismissal at first glance by the in-experienced referee Robert Jones, however, VAR claims the follow-through ‘denies a goal-scoring opportunity. This is yet another question mark around the use of VAR and how it’s being used by the team at Stockley Park.

The rest of the first half then resides into a lull, with a selection box full of half chances, mostly coming from the Foxes. The final ball was missing for Leicester with the occasional sharp passing sequence around the box but the majority was fairly scrappy from the Champions League-elect side.

The best chance of the half fell to possession dominant side Leicester with Tielemans pulling away from Salisu and firing across goal which denied by an alert McCarthy who pushes it out for a corner with his feet on 37 minutes.

A disgruntled Rodgers trudged back to the dressing room at half time, 35 minutes with a man advantage wasted. Attacking midfielder Ayoze Perez replaced defender Wesley Fofana at half time, boasting a change of formation for Leicester, away from a back 3.

Another dull 13 minutes later Southampton miraculously has a freekick on Leicester’s by-line with set-piece wizard James Ward-Prowse looking to spark some magic for the side with 10-men. A short free-kick to the edge of the box set up Armstrong who hits it first time into the raised arms of inform Kelechi Iheanacho. An undisputed penalty.

Despite having missed 3 of his last 5 penalties Ward-Prowse powers it home into the bottom left-hand corner, just beating a stretched Schmeichel in goal. The hosts surprising led after 61 minutes.

READ RELATED: Foxes come back from behind to seal vital win

The lead gave the Hosts a burst of energy. They returned to the intensity they showed in the first 10 minutes of chasing down balls and pressing hard. Unfortunately for Saint’s fans, the pressure lasted almost as long as the VAR check for the penalty as Leicester engage in an assault of shots at McCarthy, resulting in a flurry of corners.

Leicester gets what they deserve after a dominant 5 minutes since conceding as a half-cleared corner comes to Iheanacho, who glides a cross from the right onto the head of Northern Irish defender Jonny Evans who can’t be denied by McCarthy this time. A deserved equaliser for the away side.

Leicester shifted up a gear or two from that lacklustre first half as they began playing incisive football. Vardy fires a one-on-one into the body of McCarthy, then several minutes later he tees Ndidi who keeps his powerful shot low, but wide. For all of their knocking, the door continued to stay shut for Leicester.

It would stay that way for the visiting team could only recover a draw after conceding from the penalty spot midway through the second half. Alex McCarthy and Walker-Peters’ excellent defensive efforts for the Saints are rewarded somewhat with a point.

As for the Foxes, memories of last year’s end of season slip-up are still at risk of reoccurring with them still needing 3 wins from the 4 remaining games to 100% ensure Champions League football next season. 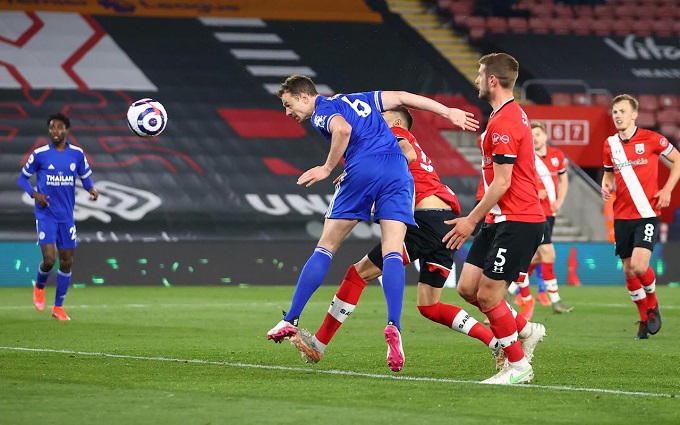