In a galaxy an eo(i)n ago, England were the most exciting white ball cricket team out there. They didn’t win silverware though. It was a talented side that talked the talk but didn’t deliver the gold and garlands.

There was the heartbreak of the 2016 T20 endgame when Ben Stokes was pummelled by Carlos Brathwaite who has been dining out on that one night ever since. In the 2017 Champions League Trophy, they were ambushed by a rampant Pakistan in the semi-final. At Cardiff that day, the surface was not conducive to the charge of the Light Brigade. Their opponents mixed it up and the hosts were stuck in porridge, neither smashing nor rotating. In the World T20 final in Melbourne against the same opponents, Jos Buttler’s team were able to make the line with ice in their veins and a realisation that this was no attack attack attack Adelaide pitch.

“I think the perception of our team has changed a lot over the last few years,” Buttler said after the fifth and most important victory over Pakistan in the last two months: “We’ve certainly not played it safe. We’ve always tried to push the boundaries, tried to get ahead of the rest of the world and be braver than anyone else. We know we’ll slip up along the way, but we trust that method and it’s served us well.” There is also a time to draw breath rather than go helter-skelter for the finish. England bided their time at the MCG yesterday when their opponents were ready to thrust.

Therein lies the secret. England are prepared to accept that risk can always bring the house down either way. If it crumbles, the optics look bad. The similarity with Morgan’s grip over the team is the artistic freedom to do what you see fit but not play in the one-note way that was sometimes their downfall. That subtle mindset change has certainly transferred over to the new regime. They have a second World T20 in the pocket to prove it.

Where Morgan had a fixed-term contract of bowling options and set plans, his successor relies more on feel and instinct. Bowling Moeen Ali at the start of New Zealand’s innings was a change purely based on a hunch, Likewise, a plan to bat first at Adelaide against India was also sidelined. Both decisions worked out rather well. There are stats and history and analytics. There is also what Bobby Simpson termed the best computer out there – the human mind.

The Lancashire man may not be as vocal or possess the outward joviality of his predecessor, but he has instilled a team spirit that has embraced the return of talent, even if that talent was tainted and seen as out of bounds by the previous regime. Time has moved on. New bonds have been formed. People make mistakes. The door lock that slammed down on Alex Hales has now been removed. The stars of the team still shine but everyone is someone. Sam Curran’s tournament proves that he is no bits and pieces player while Chris Jordan expunged memories of that over against the Kiwis last year.

Captain learnt crucial nuances off the field in Pakistan

When he travelled to Pakistan to continue rehab for the seemingly never-ending seven-match warm-up trip, Buttler insisted on learning on the job. The distance his calf injury gave to observe events without the pressure of decision-making was a huge help after a stuttering start in the English summer: “I’m learning lots just listening to the group and watching the way the guys go about things, certainly I’m watching the game without as much emotion involved, thinking about what you would do at certain times.”

England peaked at the right time and left India’s stars looking like a broken box of biscuits from the milk cart when T20 has evolved into a 360-degree snap crackle and pop speciality. There was no loss of control or panic at any point in the key four matches they had to win. In that respect, it was reminiscent of the 2019 World Cup. This time, Buttler didn’t need to whip off the bails with milliseconds to spare either.

The art of captaincy is one thing that is never finished or finalised. The promising aspect for England is that the man at the helm knows that life and cricket can be as dynamic as his team. 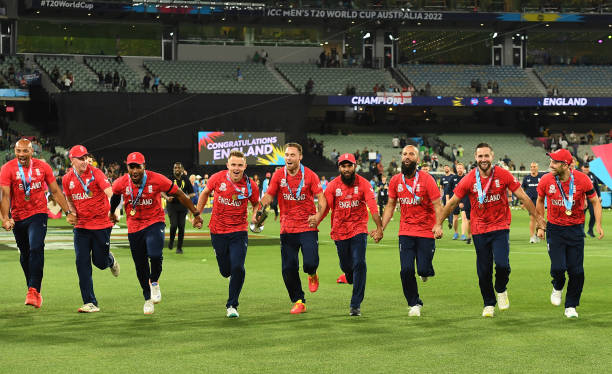