Last season, Everton found themselves in the mists of a relegation battle following a horrific season which saw the arrival of controversial manager Rafa Benitez. Frank Lampard took over the position and eventually guided the Toffies to safety after a dramatic 3-2 comeback victory over Crystal Palace in the season’s penultimate game.

After the threat of relegation had been put to bed, it was hoped that this season could be a good rebuilding process to try and get themselves back towards the top end of the table. But as we enter the World Cup break, Lampard’s team sit in 17th place, just one point above the drop zone after 15 league games, prompting fears of another fight for survival this season.

When you look at their summer window, it appeared as though Everton was making better decisions with their recruitment, bringing in experienced defenders such as James Tarkowski and Conor Coady from Burnley and Wolves, respectively. The Toffies also brought in winger Dwight McNeil, talented midfielders Amadou Onana and James Garner, and Idrissa Gueye for a second spell from PSG.

Neal Maupay was also signed to the club as a backup option to the injury-prone Dominic Calvert-Lewin. Although these acquisitions weren’t on the scale of the big-name signings of the past, it looked as though they would provide the foundations for a solid spine for the team.

While Onana and Gueye have had some solid performances for Lampard’s side, Coady has become the club captain and given the leadership responsibilities that weren’t present last season. However, despite their performances, Maupay has failed to establish himself in the Everton attack, only netting one goal in 10 league appearances.

While Coady and Tarkowski have provided some level of protection to Jordan Pickford’s goal, conceding 17 after 15 games, joint 4th with West Ham United, Chelsea, and Merseyside rivals Liverpool, the Toffees have only kept 4 clean sheets in the league, with their recent 3-0 loss to Bournemouth, in particular, showing how fragile their backline really is.

As mentioned before, Maupay hasn’t hit the ground running to be Everton’s starting striker, but having said that, Everton’s other attacking players haven’t exactly set the world on fire either. Calvert-Lewin’s injury woes have limited him to just six league games this campaign, scoring only one goal. Whereas McNeil, Demarai Gray and Anthony Gordon have combined to score just six goals.

In total, the Toffees have only found the net 11 times this season, the joint second-worst amount of goals alongside Nottingham Forest; only Wolverhampton Wanderers have a worst tally with 8 goals. Their lack of attacking prowess has led them to lose 7 and draw 5 in 15 games. Three of their draws have been a 1-1 scoreline, whereas the other two have been 0-0’s.

If Lampard’s side were able to convert just three of those draws into wins, they would be in 9th position and in the top half of the table, proving just how fine the margins are in the Premier League this season. Not for a lack of trying, it seems the Toffees are lacking that clinical edge which could see them steer clear of the bottom three.

Meanwhile, Alex Iwobi, who was a winger with little in the way of creativity when Lampard arrived, has now been converted into an energetic central midfielder who isn’t afraid to press the opposition and win the ball back for his side. His progression this season has been a bright spark for Everton fans, yet these efforts are being hampered somewhat by the lack of an attacking threat up front.

As much as Everton has defensive worries, their attack has been the more worrying aspect of Everton’s game this season. With Calvert-Lewin’s injury problems, other attackers need to step up to the plate and provide the goals necessary to keep the Toffees afloat, or risk dropping down to the Championship. The loss of Richarlison to Tottenham Hotspur in the summer has certainly left a big hole to fill in the attack.

What next for Everton

Before this season started, Everton was given three targets to avoid a terrible campaign which included avoiding relegation, stability and a cup run. Now that we’ve reached the World Cup break, the Toffees are looking to avoid relegation yet again, stability still looks a little shaky, and they are out of the League Cup after a disappointing 4-1 defeat to Bournemouth last week.

Lampard himself is facing massive pressure at Goodison Park to keep Everton in League again. Despite getting the job done last season, the former midfielder still doesn’t have a vast amount of experience in the dugout despite managing Derby County and Chelsea.

The Toffee’s issues with spending and ambitions have led to them looking downwards instead of upwards in the table, and their mismanagement of transfers and managerial appointments means they’ve had to scale back the spending a little bit to avoid breaking FFP rules.

If the owners do decide to spend more money to help Lampard in January, it remains to be seen whether those purchases can guide Everton away from the relegation zone and begin to start looking upwards in the Premier League table. 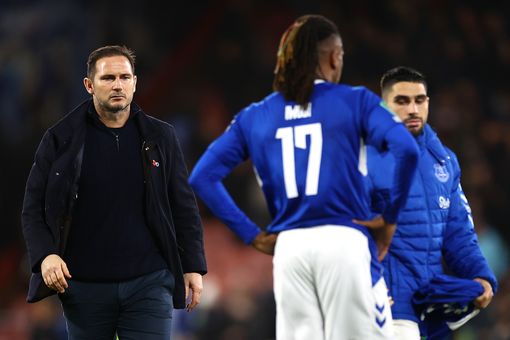