Gary Patterson has left TCU after over 20 years as coach of the Horned Frogs, the school announced.

After coaching at TCU for the past 24 years, including 21 seasons as the head coach, the school decided to part ways with Gary Patterson on Sunday. In a statement, TCU athletic director Jeremiah Donati said he and chancellor Victor Boschini asked Patterson to coach for the remainder of the season, but Patterson declined.

“We asked him to continue on as our head coach for the remainder of the season, and take on a different role in 2022, but he believed it was in the team’s and TCU’s best interests to begin the transition immediately,” Donati said. “We respect Coach Patterson’s perspective and will move forward in that direction.”

“The story of Gary Patterson and the rise in the fortunes of the TCU football program over the last 20 years is clearly one of the most remarkable in the history of college football. We are grateful to Gary and Kelsey Patterson and appreciate everything they have meant to TCU and the Fort Worth community,” Donati said in a statement Sunday night. “Under his leadership, TCU has become a nationally recognized brand name in football and in collegiate athletics.”

TCU has dropped three in a row, all in the conference, including Saturday’s 31-12 loss to the Wildcats. That decision, in what turned out to be Patterson’s finale, was a microcosm of the problems that have plagued a proud program of late.

Jerry Kill, the former head coach at Minnesota and a longtime friend of Patterson, has been named the interim head coach. Donati said Patterson will “assist” TCU “in the transition to take place.”

Patterson, 61, has been the head coach at TCU since 2000 and helped guide the program’s transition from Conference USA to the Mountain West and into the Big 12. Along the way, TCU won one C-USA title, four Mountain West titles and one share of the Big 12 title. He also led the Horned Frogs to 17 bowl games, six top 10 finishes and 11 seasons with double-digit victories.

Gary Patterson’s two most successful seasons came in 2010 and 2014. In 2010, the Horned Frogs went 13-0, finished No. 3 in the BCS rankings and beat Wisconsin in the Rose Bowl. In 2014, TCU went 12-1 and was the final team out from the first-ever College Football Playoff. The Horned Frogs then blew out Ole Miss in the Peach Bowl.

This year, the Horned Frogs opened the year 2-0 but have since lost five of their last six games. The 31-12 loss to Kansas State on Saturday dropped TCU to 3-5 on the season. And with games against Baylor, Oklahoma State and Iowa State still on the schedule, TCU could very well have its second losing season in the last three years.

With TCU moving on from Patterson, there are now seven head-coach openings at the FBS level. The six others are Georgia Southern, LSU, Texas Tech, UConn, USC and Washington State.

In all, Gary Patterson amassed a 181-79 record at TCU. But things have not gone very well in recent years. 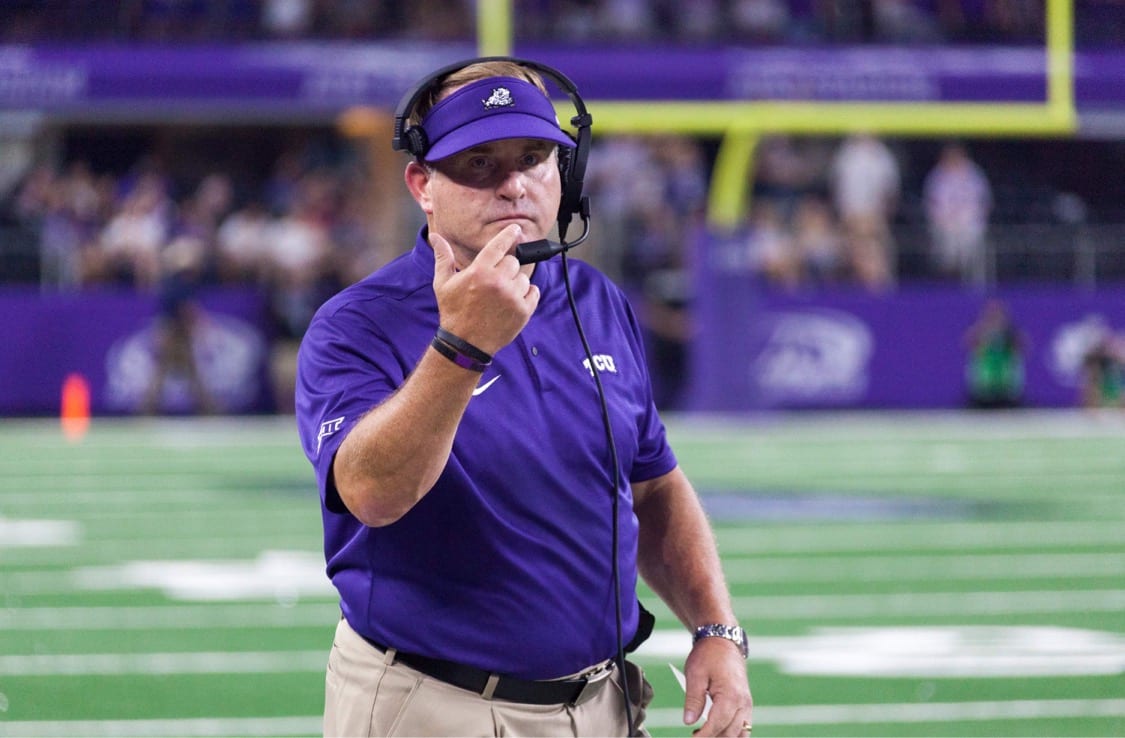