In the world of Formula One lots of crazy things can happen.

Ocon winning in Hungary, A McLaren 1-2 in Monza and the Jordan F1 team making a powerboat?

Yes, you heard me correctly. Famed F1 constructor Jordan once made a powerboat in collaboration with Honda, The team’s engine supplier at the time.

Somehow in a book, I was looking in which contained facts about F1, I found that Jordan, had a splash in powerboat racing in the early noughties.

Immediately I need to see what this was about.

So what is the Honda Formula 4- stroke series?

The Honda Formula 4-Stroke Series is a powerboating championship with 130hp powerboats, Increased to 150hp and 225hp later. Founded in 1999 with help from Steve Curtis – 8x Winner of class 1 world offshore powerboat series – the series was successful for many years.

That was until 2009 when the much-loved series was taken over by Powerboat P1 World Championship owners. Where it was given a new name and engines.

Here is a video of the series:

It’s the year 2001. You’re chilling at home with your Tamagotchi seeing Shrek for the first time when F1 team Jordan announce an entry into the Honda Formula 4-Stroke Series.

When the Powerboat was first announced in Barcelona in April 2001, it was presented with the Formula One Teams 3 drivers at the time. Heinz-Harald Frentzen, Jarno Trulli and Ricardo Zonta.

But you know what the boat didn’t look horrible? It had the same classic yellow as its classic F1 cars like the Jordan 198, but where was the snake or the wasp livery, like in the classic Jordan days?

Although it did show off Eddie Jordan’s new energy drink brand EJ10. Which caught on, right?

However, there was a “spin-off” drink called V-10 which added Vodka.

While speaking at the reveal event in Barcelona, Eddie Jordan said that the Honda One-Design Series “Gives Jordan an opportunity to extend its relationship with Honda into areas outside F1”

Unfortunately, Honda would leave Jordan in 2003. This was to allow Honda to focus on its relationship with BAR.

The team that Honda would eventually buy out which is now owned by Mercedes, Who are currently in a thrilling title battle with Red Bull. https://worldinsport.com/mercedes-and-red-bull-the-stats-behind-fight/

So was it all for nothing?

It’s unfortunate that Honda would spilt from Jordan in 2003. It would lead to Jordan having to use Ford Cosworth engines in the 2003 season. A season where Jordan finished in 9th place far from where they were with Honda, which was 6th in 2002.

This is where the story ends. I have no idea what happened to Jordan in the Honda Formula 4-Stroke Series.

They did announce that a celebrity guest would compete at each event and that Mike Brewer, Channel 4 presenter and of Wheeler Dealers fame, would compete in the first round, racing in the Honda engined Jordan Powerboat.

I did try and contact Mike Brewer about his experiences in the Jordan F1 Boat. However, he did not get back to me. Maybe he is mentally scared about the whole fiasco.

Very little is left online about the Honda Formula 4 Stroke Series itself, I found out that after 2003 the 130hp series was abandoned and after 2007 there are no records of the championship existing.

The Honda website is straight from the early 00s. Classic.

But I guess we’ll never really find out what happened with the Jordan powerboat.

Unless I was to message Eddie Jordan directly of course. 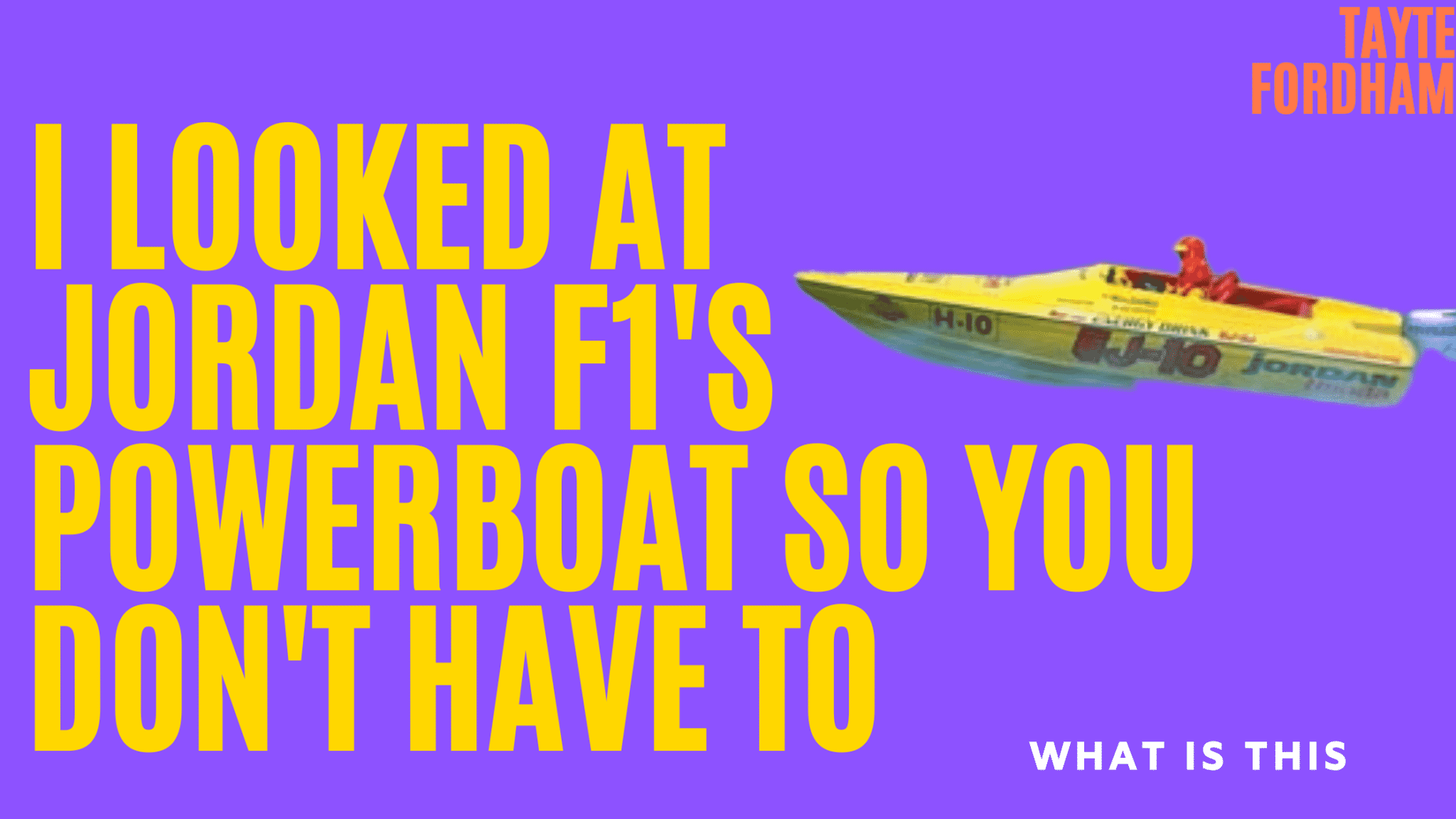