This Sunday 3rd October at 4:30pm we will wittness the clash of the biggest modern day rivalry of the Premier League in recent years as Liverpool face off against Manchester City at Anfield.

Liverpool and Man City weren’t always fierce competitors, nevermind a rivalry of any form, with Man City only coming into the limelight over the last 13 years after being bought by Sheikh Mansour in 2008. This immense foreign investment boosted Man City to the upper echelon of European football, winning 5 Premier League titles and reaching their first Champions League final last season. Man City fans will be hoping this success will be the foundation of their club’s history to continue building on.

Unlike Man City, Liverpool have enough history that you could probably gain a degree on their various rise and falls over the years. Liverpool have won the first division title (including their 2019/20 premier league title) 19 times, with their first title coming in 1901 in comparison to Man city’s being over a century later in 2011. Despite this contrasting history, these two teams have become fierce rivals since signing world class managers in the form of Jurgen Klopp and Pep Guardiola, so much so that this fixture has had the most goals in the Premier League since 2016.

Before Man City became the powerhouse of Manchester, Man Utd vs Liverpool was the fixture everybody was waiting for. Man Utd has 20 first division titles to Liverpool’s 19 while Liverpool has 6 European titles to Utd’s 3. This battle for superiority is still ongoing, but due to the success of City contrasting Utd’s trophy barren years, including no Premier League title since Sir Alex Ferguson left Man Utd in the 2013/14 season, Man City vs Liverpool is the modern-day rivalry of the North football fans currently long for.

Man City was able to take revenge after losing their hold on the Premier League title to Liverpool in 2019/20, with a string of consistent defensive performances thanks in large part to the signing of star defender Ruben Dias. It also helped that Liverpool had an unfortunate run of long term injuries to key players such as Virgil Van Dijk, Joe Gomez and Fabinho. City has had the best of Liverpool in 2 out of 3 of their last matches, leaving Liverpool yearning for retribution in this rivalry.

This year the Reds are flying high again, scoring goals for fun. Scoring at least 3 goals in each of their last 6 games, including a dominating victory against Porto winning 5-1 in the Champions League in their last game. Now with Virgil Van Dijk back in the team alongside a free-scoring Mohamed Salah (5 goals in 6 apps in EPL) seem to have brought back the confidence we saw propel Liverpool to domestic and European glory since Jurgen Klopp took over. Liverpool is currently unbeaten this season and will look to continue their red hot form.

Surprisingly Man City haven’t had the most convincing of starts to the season. Losses against Tottenham and PSG have put a dent in their momentum, but Man City have shown what they’re capable of this season with clean sheets and plenty of goals, most notably breezing past both Norwich and Arsenal with 5-0 wins. After losing 2-0 midweek to PSG, City will be eyeing up the chance to make reparations and forget about their lacklustre performance in Paris.

In a rivalry of this magnitude, with so much at stake, the result can be determined by moments rather than team performances and there are more than enough individuals on the show today to produce these moments of magic.

As mentioned earlier, Mohamed Salah has been prolific so far this season and doesn’t show any signs of stopping. Diego Jota, Sadio Mane and Roberto Firmino have 7 goals between them this season in the Premier League so the goals are freely flowing from the Liverpool forwards. Unfortunately, Liverpool will be without Trent Alexander Arnold who is a key influence on the right flank, able to deliver delightful crosses in from all angles, which has allowed them to create 4 big chances and 2 assists so far this season. Without TAA Liverpool may struggle to break down City’s defence as freely as they have done to other teams this season.

Last season the signing of Thiago from Bayern Munich to Liverpool was seen as an absolute bargain for £25M. He had just won the Champions League and had thoroughly impressed everybody with his tempo setting play, insightful vision and cutting through balls. However, the less said about his first season the better as he struggled to show the qualities he was known for as Liverpool struggled defensively and this put the limelight on Thiago’s defensive frailties. This season, thanks to Liverpool’s squad being almost close to full fitness, he has been able to demonstrate his offensive qualities which have earned him a goal and an assist so far in the Premier League.

So far this season Man City’s key players such as Raheem Sterling and Kevin De Brunye haven’t started strongly. De Brunye is currently without a goal or an assist in the Premier League after 4 appearances, which will be slightly worrying for Guardiola as his star man seems to be struggling relative to the lofty standards he’s set for himself. Sterling has only one goal in 6 appearances which again is far from the standard of which we have become accustomed to seeing in recent years since Guardiola took him under his wing.

One player who has been excelling is Jack Grealish with a goal and an assist in 6 appearances. Despite the pressure of a £100M price tag he has seamlessly fit into Guardiola’s squad and embedded himself as a key player able to produce pieces of quality that we saw him bring off the bench in the Euros this Summer. Fitting into a Guardiola first team immediately upon signing, pushing the likes of Phil Foden and Raheem Sterling to the bench, is no easy task as many of Guardiola’s past signings will tell you. How he develops over the next couple of seasons will be indicative of whether City can push on to the next level.

I for one am thoroughly excited to watch this match as it is set up to be the fixture of the season. An early goal today could see the floodgates open with end to end counter-attacking football which is what the neutral fans will be praying for. On the other hand, it could be a cagey affair depending on how the managers line up, with Guardiola probably more than happy to come away with a draw away at the fortress that is Anfield while anything but a win will be a disappointment for Klopp’s men.

This rivalry is one that I don’t think will go away for a long time with both teams constantly battling for the title. Personally, I believe Liverpool will come away with a win today to carry on their unbeaten start to the season. 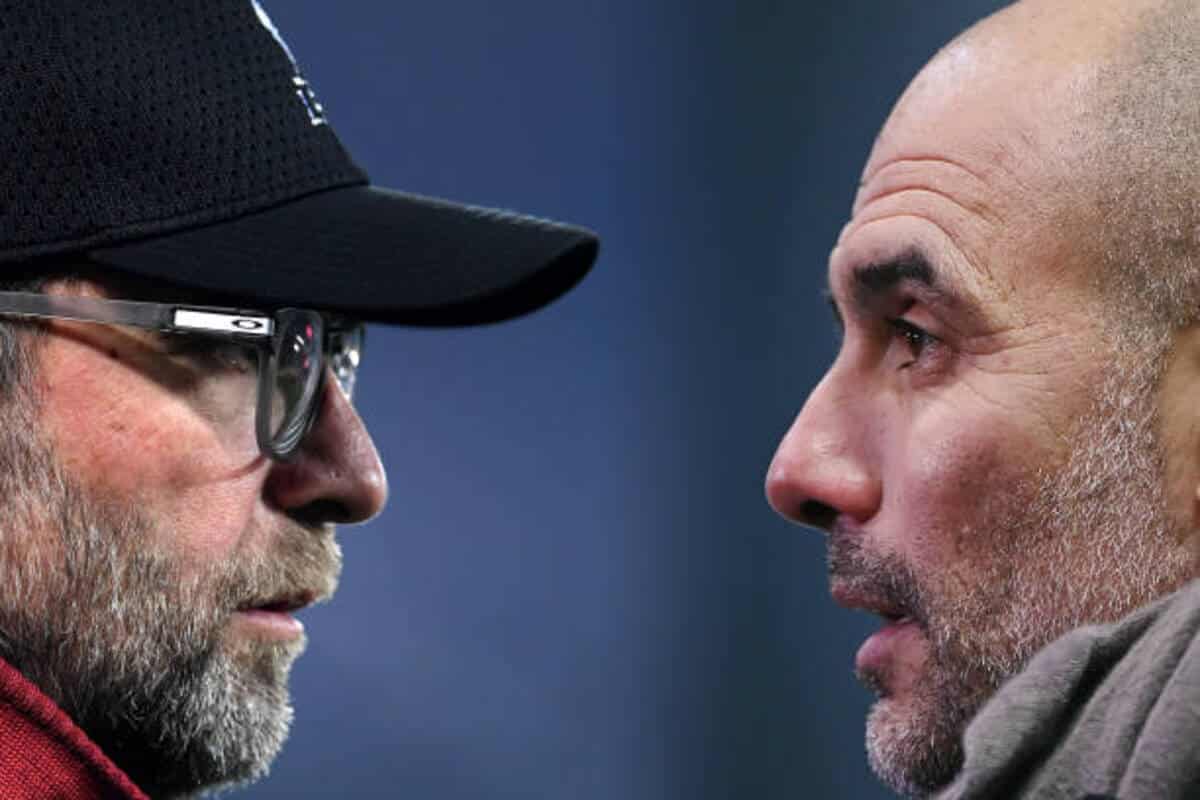